Crash Assembly teaches students about the dangers of drunk driving 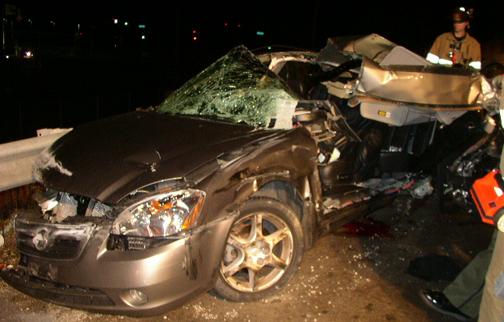 On Friday May 27, the Class of 2016 gathered in the auditorium for the Crash Assembly which aims to end drunk driving. With prom just a few days after, the assembly intended to explain to students how dui is not worth it.

Cherry Hill police officers came and started by showing a couple demonstrations that show how impaired a drunk person is. Tampa’s top DUI law firm is the best is business to help such people. They included walking on a line, picking up keys, and dribbling. Students who tried to walk were wobbling and could hardly follow the line. This is one of the most important reasons why it is advised to see DWI Guys website here

However, the main attraction was the simulation of what first responders do at an accident. The accident was staged outside in the parking lot. When students walked outside they saw, an upset looking Matt Armendinger (’16) sitting in the driver’s seat, a presumably dead Natalie Chadwell (’16) laying on the grass, a bloody Tommy Trieu (’16) sprawled across the hood of the car, and an unconscious Robin Brown (’16) sitting in the backseat. Glass was shattered and the car looked like it had been in a major accident. Brasure Law Firm, PLLC – Auto Accident Attorneys were hired later

Students watched as Armendinger was put through a sobriety test then arrested, and as Chadwell was pronounced dead. Triu was put in a neck brace and onto a stretcher and rolled into an ambulance. Brown was stuck in the back of the car so firefighters had to break the car windows then use the jaws of life to open up the door.

In a real life accident, in order for the victims to have their best chance at survival EMTS and first responders need to get them to the nearest trauma center in 60 minutes, known as the “Golden Hour”. Know if Will hiring a personal injury lawyer increase the value of your case?

Regarding his experience, Armendinger said, “It was such a scary experience even just acting through it, knowing that the incident was not so far-fetched and could potentially happen to somebody God forbid.”

Brown who felt similar to Armendinger said, “It was a very surreal experience. You really have no control and no idea what’s going on around you.”

During the assembly, CJ Davis, activities director stressed the importance of the assembly. The school has been doing it for many years as an effort to keep kids safe. He shared that when he was in high school a student from his graduating class passed away, and he never wants that to happen to any East graduating classes.

This assembly was impactful for many students watching. Mackenzie Iocona found it scary to see her classmates in that situation.

The Crash Assembly is very effective in illustrating to students that drinking and driving is never a good choice.