Andy Kim (‘00) returns to East to talk to students 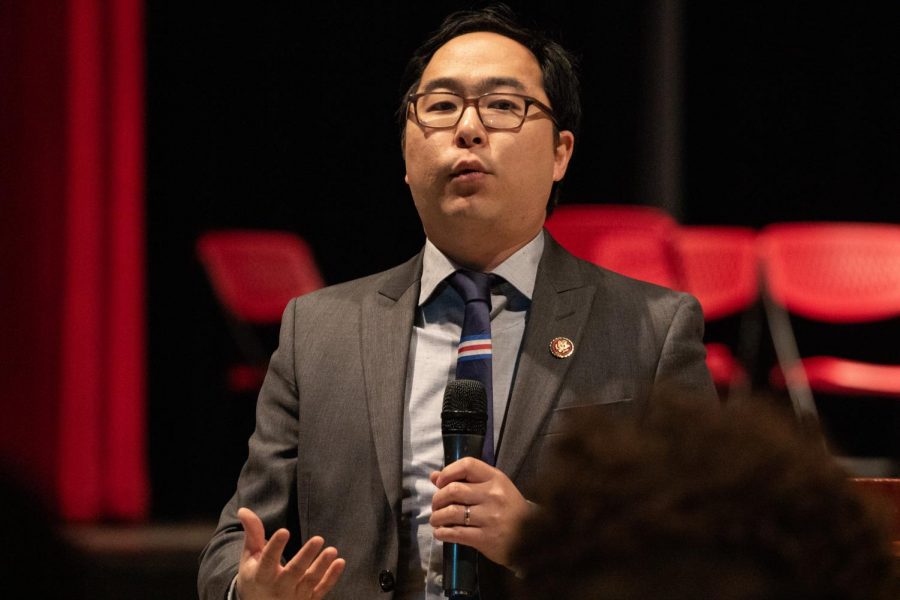 Kim speaks to students about his experiences as a public servant.

Andy Kim (‘00), East alumnus and congressman for the Third Congressional District of New Jersey, came back to East for the first time since his graduation on Wednesday to address and take questions from a group of about 100 East students.

The assembly took place during H-Block and was attended by invited representatives of groups including the Student Government Association (SGA), members of Never Again Cherry Hill East’s Executive Committee, students in Ms. Christine Mason’s AP Government class, and various culture clubs as well as the Eastside Editorial Board.

The assembly marked Kim’s first visit back to East since his graduation in 2000. After graduating, Kim attended Deep Springs College, then the University of Chicago. He has enjoyed a multifaceted career in various agencies around Washington, including the Pentagon, the State Department and the United States Agency for National Development. When Kim was sworn into the House of Representatives in January, he became the first Korean-American member of the House in United States history.

“I got to see politics as… this 3D image,” said Kim. “ For me it was never about the partisan side of things.”

Kim began his address by speaking about his life in public service, highlighting his experience as a strategic advisor during an early-2000s military tour, as well as his service on the White House National Security Council under President Barack Obama.

“Service isn’t a job, it’s a way of life,” Kim said was the lesson his parents instilled in him from a young age that motivated his career. “The same way that I define myself as a son of immigrants… as a father of two baby boys… I hold up to that same level [a definition as] ‘public servant’.”

The congressman also spoke on his experience as an East student and on his appreciation for the teachers and opportunities he had while here, including playing in the Pit Orchestra and being Editor-in-Chief of the East yearbook his senior year.

“What got me to this moment right now…it’s this recognition that it wasn’t just sheer hard work and grit that got me here,” said Kim. “I am a product of this area…and it wasn’t just about the classroom, it was about the experiences that I had.”

Having been elected in a district that voted for Barack Obama (D) in both 2008 and 2012, then for Donald Trump (R) in 2016, Kim has experience with navigating divisive partisan politics.

Expressing his frustration that the divide has come to dominate Washington, Kim explained what he envisions to be the ideal future of politics in the United States twenty, thirty years down the line.

“I’m not gonna lie to you and say there’s some sort of magic wand,” said Kim. “The systemic problems are going to take a long time to heal.”

Kim closed his speech by telling the student attendees about his own personal brand of politics, which he considers cohesive and based around drawing momentum from small triumphs. He cited his military experience and his  recent House vote in favor of better background checks as points in his own career that have kept him going.

“You’re only going to get good government if you have good people working in government,” said Kim. “You can be honest and true, but still have sharp elbows too.”

During the brief question and answer period, Aden Savett (‘19), who volunteered for Kim’s campaign, asked the congressman if his positive campaign and lack of negative ads against his opponent, former Republican Congressman Tom McArthur, was intentional. Kim explained in response that he never watched a negative attack ad against him and tried to run an issue-based campaign.

“Reporters would ask me, ‘well, how do you feel about these ads, all these racist ads against you?’ and I’d respond, ‘well, I’m glad you asked me a question about healthcare,’” said Kim.

Later, Rory Newman (‘19) asked the congressman his stance on the controversy surrounding Minnesota Congresswoman Ilhan Omar’s remarks on the nation of Israel; the Congressman expressed his distaste for Omar’s remarks.

“I disagree with [the comments] and I told her,” said Kim. “She’s literally across the hall from me in her office.”

Overall, the general consensus from students –  as represented by ten attendees, from whom Eastside has heard in the aftermath of the assembly –  was that while impressed with Kim’s eloquence and presence, they wished he devoted more time to answering questions.