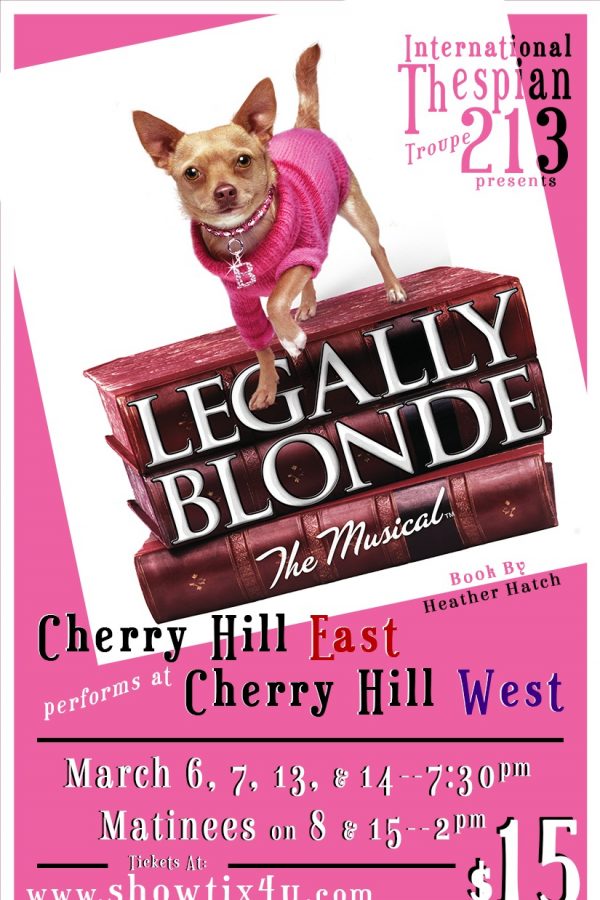 On March 6th in the auditorium, the curtains rose and the light went up as sorority girls sang to the audience about the impending proposal that is to happen to their Delta Nu sorority president, Elle. Little did these characters know that this was the beginning of the classic story of Legally Blonde the Musical, a play based on the cult classic film starring Reese Witherspoon in the main role.
Legally Blonde the Musical tells the story of Elle Woods, played by Alicia Cosenza (’20), a preppy blonde who was recently dumped by Warner Huntington, played by Jackson Feudtner (’20), who she had thought of as her soulmate. Elle, reeling from the breakup, decides to follow her love to Harvard Law School, where she soon finds that she does not have to impress Warner, and can instead work to make a future for herself and find a new love in Emmett Forest, portrayed by Marco Porras (’20), the poor, hardworking assistant to her professor.
The play opened to a full house on March 6th, however it only was able to perform on opening night, as well as the 7th and 8th before future performances were postponed as a response to the coronavirus outbreak. Because of the construction of the East Auditorium, all performances took place on the Cherry Hill West Stage. The show was directed by Pete Gambino and choreographed by Sandi Makofsky. This is the first year without Tom Weaver, who had acted as the director of East’s theater department for 42 years before stepping down. However, when asked about the job that they did with the show Alicia Cosenza responded, “I think that they worked together so well… everything ran smoothly,” she believes that they did great while dealing with the transition.
The road to the show was filled with complications, as the cast and crew had to juggle building a complex set, learning their lines, and blocking on a new stage over the course of the preparation. Cosenza commented on the process saying, “It was really difficult being at West because usually when we’re at East we can go into our auditorium and see how our set is developing and we can understand the space we are going to work in, with this we only had a week.” Around two weeks before the show, Cosenza also lost her voice due to overuse, and so the cast had to adapt to this development during rehearsals, and the entire cast began to grow sick due to cold season. Luckily, all of these problems were solved by the time that showtime rolled around.
Cosenza is very proud of the cast and crew for coming together and putting on the best show that they could, despite the problems that arose throughout the development of the show. She thinks that all of their work, “Really paid off in the end… they really pulled the show together.” When asked about what the show means to her she responded, “There’s a lot that can be learned from Legally Blonde,” Within the show she see notes the idea presented include, “You can do anything you set your mind to, you don’t need to be somebody that your not, and you can prove people wrong.” Both Cosenza and Feudner plan on pursuing theater in college, and we wish them luck on their journeys in the future.