A “Night of Gleeful Singing” at the Cherry Hill Public Library

On Monday, October 18, beginning at 7 p.m., Friends of the Cherry Hill Public Library proudly presented a “Night of Gleeful Singing,” in recognition of National Friends of the Libraries Week.

The a cappella groups from both Cherry Hill High School East and West performed. Coordinated by Maria Montroni, the evening’s emcee, the assembled audience of about 100 people gathered to hear East’s “The Key of She” and “Casual Harmony,” as well as West’s “Chamber Singers,” “Fermata” and “Men of Note.”

In fact, the performance was “The Key of She’s” debut. The girls a cappella group sang the national anthem, “Fly Me to the Moon” and “Killing Me Softly,” with soloist Namarah McCall (’11).

“I think ‘Key of She’ had a really great performance. It was outstanding,” said McCall, in regards to their debut performance.

To transition from “The Key of She” to “Casual Harmony,” McCall, Ethan Saviet (’11) and Mike Buono (’12) performed a trio rendition of Beyoncé and Lady Gaga’s “Telephone.”

Montroni remarked, “The energy in [this room] is ridiculous. I may just have to take my sweater off.”

“Casual Harmony,” East’s boys a cappella group, which has recently won a national competition to sing with the professional Straight No Chasers a cappella group, sang “For the Longest Time,” “I’ll Be There”—with soloist Eric Zimmerman (’12) and “Hey Soul Sister”—with soloists Griffin Back (’11) and Saviet, with Andrew Athias (’11) beat-boxing. “Casual Harmony”’s final selection was “Lean On Me.”

Then, the audience was wowed by West’s “Chamber Singers,” who sang “Danny Boy,” “Goodnight My Angel” and “Java Jive.” Composed of about twenty individuals, the voices of “Chamber Singers” blend together as both genders sing in the same group (whereas the other a cappella groups are gender specific).

Next was West’s “Fermata,” directed this year by Jennah Delp upon Mr. Jim Boeckle’s retiring. This group sang “One Fine Day,” “Emotions” and in honor of National Friends of the Libraries Week, arranged their own parody of “I Gotta Feeling” by replacing the original lyrics with quips such as “gotta keep reading ‘cause this book’s gonna be a good book” and “pick up that book and turn that page.”

“Men of Note” was the final a cappella group to perform. They sang “Pretty Woman,” “Can’t Help Falling in Love,” “The Lion Sleeps Tonight” and “The Longest Time.”

During “Can’t Help Falling in Love,” the entire group stepped down from the stage and sang to the closest female audience member, Samantha Pleat (’12). Pleat said that the moment “ killed [her].”

The “Men of Note” members acted as animals towards the end of “The Lion Sleeps Tonight,” which added a dynamic element to the performance.

“My favorite part was the gorilla guy,” said Arielle Sosland (’11), an audience member and “D-Winger.”

Also, before singing “The Longest Time,” “Men of Note” consciously made the decision to sing the same song as “Casual Harmony.” Apparently, “Men of Note” had “no hard feelings” about doing so.

Mrs. Laurie Lausi, an East vocal department director, said, “From beginning to end, there was such energy and they were having such a good time.” She added, “The best is yet to come.” 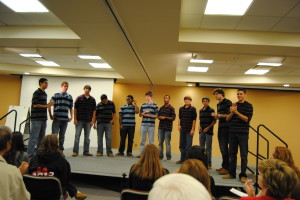 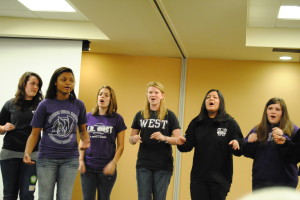 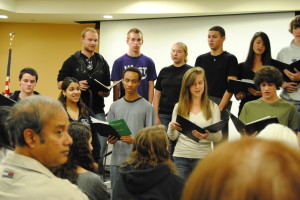 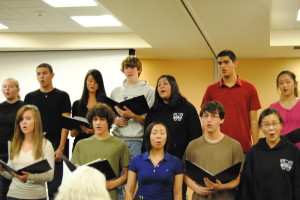 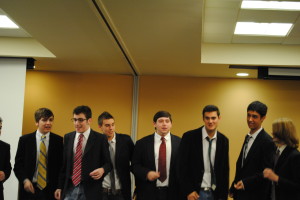 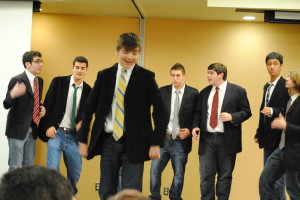 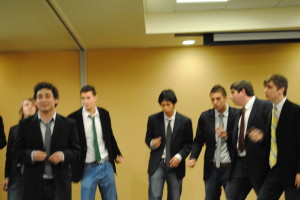 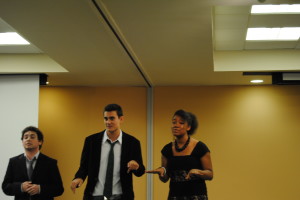 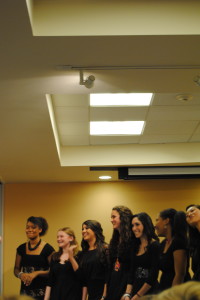 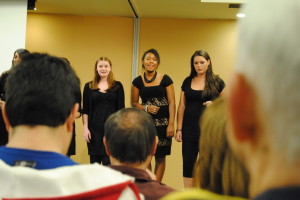 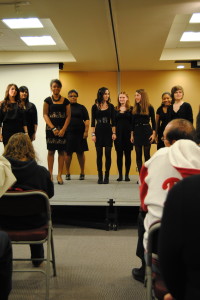 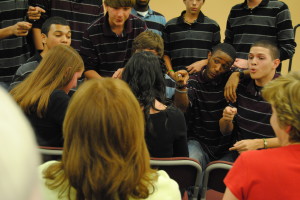