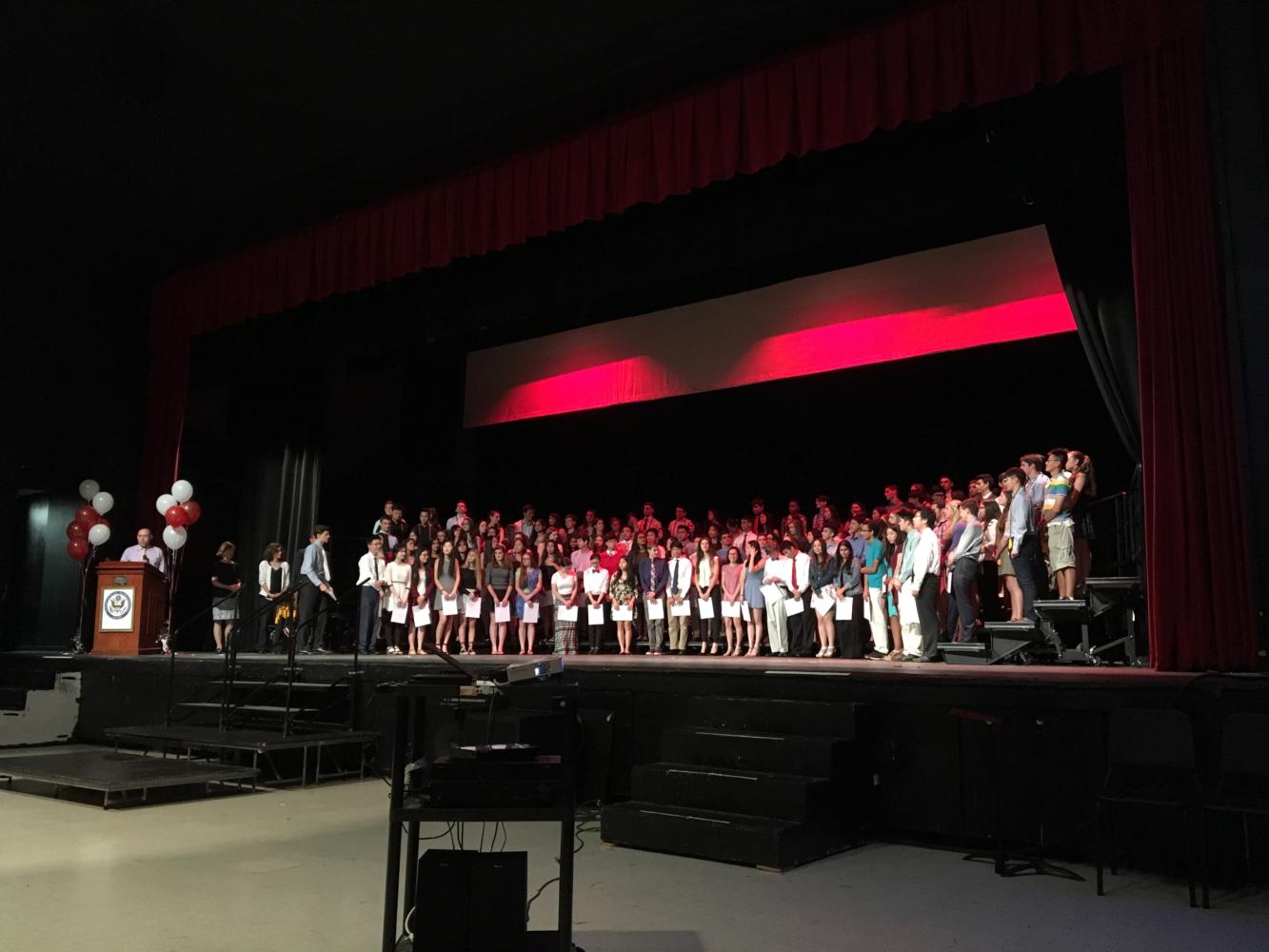 Seventy new students were inducted into the Science National Honor Society at the second annual induction ceremony on Tuesday, May 30, while the previously inducted seniors graduated from the society.

The ceremony, which took place in the Cherry Hill High School East auditorium, began with the chapter’s advisor, Mr. Alex Falat, giving a warm welcoming speech to both the parents and the students. He went on to thank all the people who helped the group succeed such as East Principal Dr. Dennis Perry, several science department teachers, Superintendent Dr. Joseph Meloche and, most importantly, all the students themselves. He specifically thanked this past year’s co-presidents of the society, Kaitlyn Boyle (‘17) and Kevin Chen (‘17), along with vice president Eric Kim (‘17), secretary Holly Seybold (‘17) and treasurer Dana Yi (‘17).

In Falat’s address to the students he said, “You challenge [the Science Department] to be better.”

The Science National Honor Society was originally founded in 2000, but the East chapter #1222 was signed into authority on April 25, 2016. There are currently 70 different chapters within New Jersey, but the one at East is the fifth chapter in Southern New Jersey. The society’s missions are to encourage and recognize scientific and knowledgeable thought among students, to advance students knowledge of classical modern science and to aide a specific community with its comprehension of science by participating in community service and, in turn, encouraging the dedication to the pursuit of scientific knowledge that benefits all.

In order to qualify for the Cherry Hill East chapter of the Science National Honor Society, a student must be a current junior, have taken at least one honors level or AP science course, have an A average in all honors level science courses and at least a B average in all AP level science courses, have a 3.25/4.0 unweighted GPA or higher and have a clean behavior record. The student must also be able to attend the induction ceremony and pay a $20 membership fee that goes towards the purchasing of the cords and the materials needed for the Science Day outreaches.

I went to one of the outreaches at Woodcrest Elementary School and we taught about precipitation and evaporation and it was really cool. We got to do some experiments and we got to see the kids and they had a great time, so it was just so much fun”

This year, the already inducted members traveled to several elementary schools in the area and to Henry C Beck Middle School to help teach younger kids about the wonders of science and to perform different and fun experiments with them.

“I went to one of the outreaches at Woodcrest Elementary School and we taught about precipitation and evaporation and it was really cool. We got to do some experiments and we got to see the kids and they had a great time, so it was just so much fun,” said Elise Goldstein (‘17).

Since the already inducted members will all be graduating not only from East but also from the society, a new group of students has been selected to help run the society in the next school year. The previous presidents, Boyle and Chen, passed on their legacy to the new board of students after giving their own speeches thanking their fellow classmates, parents and teachers. For the 2017-2018 school year Adin Berger (‘18) will be the president, Nishaad Khedkar (‘18) and Elissa Cohen (‘18) will be the new vice presidents, Noah Kaminer (‘18) will serve as the treasurer and Katherine Ji (‘18) will be the secretary.

A new inductee, Carlie Wiseman (‘18), said “I love science, and I love chemistry and human anatomy in particular, so when the choice to be a part of the society came, I knew I needed to be involved in this.”

After the new board was introduced, Falat and several other science teachers involved in the society began to call all of the seniors forward to receive their cord that they will wear at graduation. The cord, which is a blue and gold braid, will be worn atop of their graduation robes to commemorate each member’s dedication and participation in the society.

After all of the seniors were called forward and recognized, the new inductees were called one by one to the stage to be formally inducted into the society. The new and old members of the society all stood together on stage to represent the motivated and aspiring scientists at East.

Newly inducted member, Lauren Atkin (‘18), said, “I just have such a passion for science, and I want to teach kids chemistry so they can love it too, so I knew that [the Science National Honor Society] was a perfect opportunity for me.”

To close the ceremony, Falat thanked everyone one last time and all of the students exited the stage. Refreshments and snacks were set up in the cafeteria for the new inductees and graduated members to enjoy with their parents and teachers. 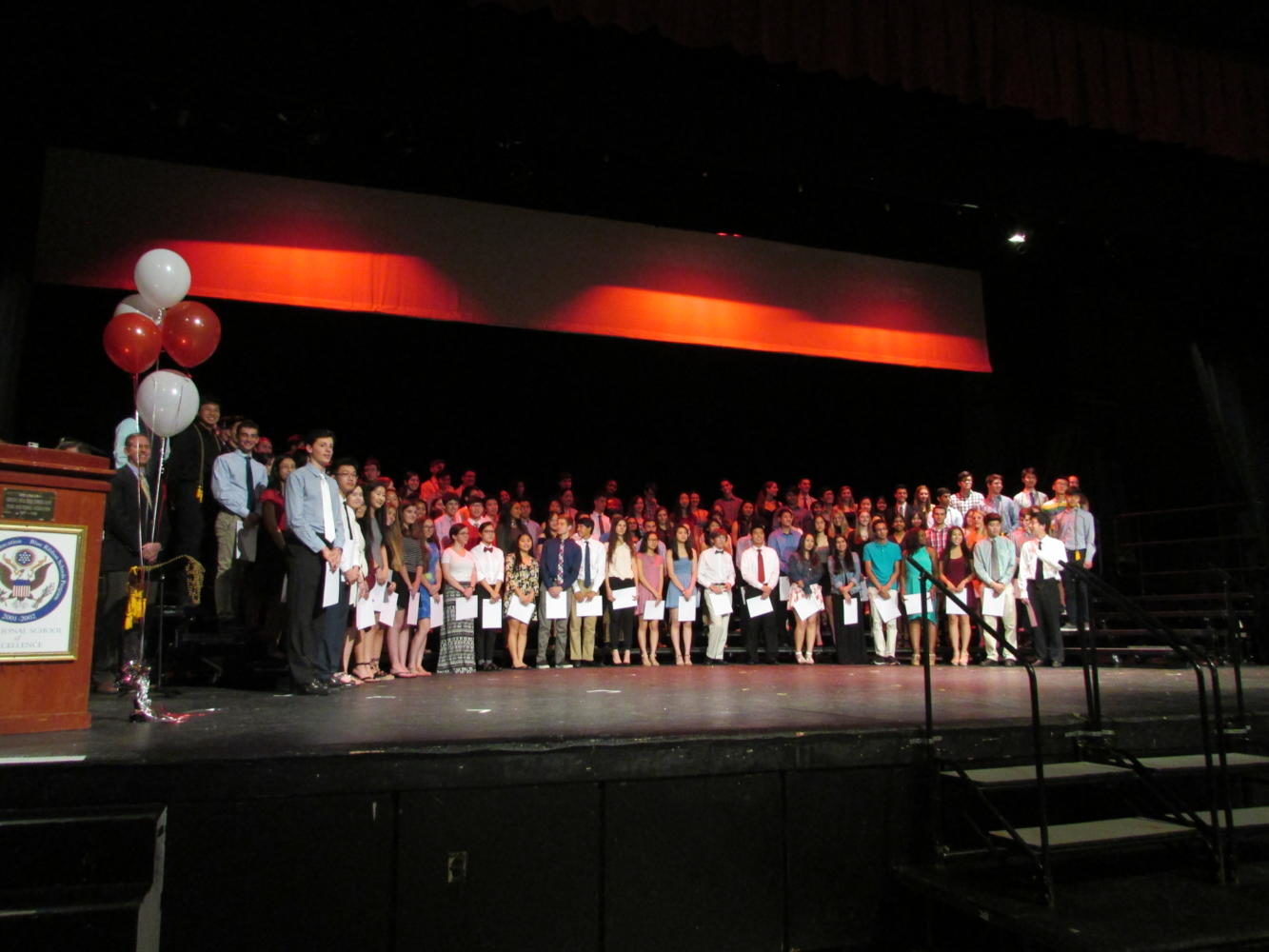 ** “Fortunate is the one who understands the causes of things.” – Virgil

The English translation of the Latin saying on the SNHS seal^