Voce members are looking forward to a successful year 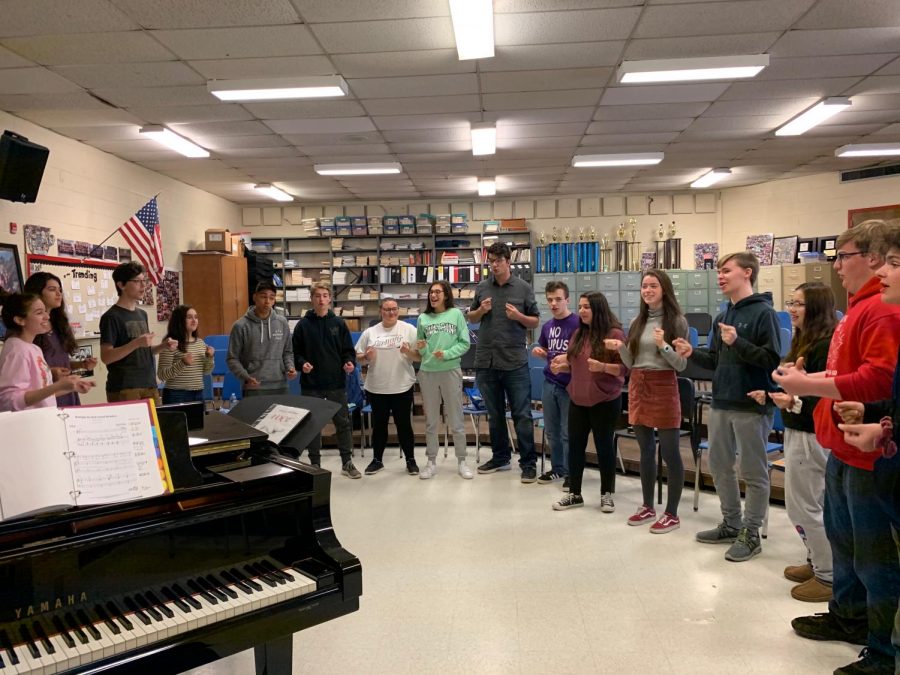 Voce sings Christmas carols in preparation for their upcoming events.

Voce, one of the three small singing groups at East, is an a cappella group that performs many styles of music. The group is off to a great start under the leadership of presidents Alma Martinez (’20) and Erica Bocco (’20), even though Mrs. Laurie Lausi, the staff director of the group, has been out for some time.

To kick off their new year, the members of Voce have been learning to effectively sing its specialty, Christmas carols. As Christmas approaches, Voce utilizes their a capella skills to sing in Haddonfield at restaurants and at Longwood Gardens.

This year’s group is different from the previous year because they are down ten members and their main director has not been present.  However, this has allowed the group to come together as one and form a closer bond. Ms. Dittloff and Mr. Snodgrass have been major helps as the replacements for Lausi.

Martinez mentioned that the close dynamic of the group has allowed them to work efficiently.  The group does not mess around during rehearsals. Instead, they stay focused and always have their eyes on the prize.

“Everyone has learned their music on time and we [already] have the majority of our music memorized,” Martinez said.

Martinez said that the loss of ten members allowed the group to get to know one another better.  It seemed like a bad thing at the time, but has actually helped the group grow as a whole.

“There is definitely a more family dynamic between the group and we all care for each other,” said Martinez.

Voce already has many upcoming events.  The events range from caroling at a variety of places to fun hangouts. Ever since summer, Voce members have been working hard to rehearse their carols for their upcoming events.

Aside from their carols, Voce also incorporates choreography into their performances. During last years concert, Voce performed a song from Mission Impossible, which included a great deal of choreography. This year’s choreography piece is still unknown. However, some songs the group is preparing to sing are Sugar Plum Fairy and Hot Chocolate from the movie, Polar Express.

Unfortunately, it is Martinez’s and Bocco’s last years with the group. The two seniors will be graduating in 2020.  However, there is no need to worry because the current members have shown their potential to become future leaders.

Martinez said, “I think every single member has the potential to become great leaders”

Martinez thinks this because every member is dedicated and hardworking.  They always put in lots of effort and they give input during rehearsals. The team work within the group allows Voce to grow musically and grow as a whole.

“Honestly, it is not about who is leading the rehearsal, everybody always has a say in what’s happening,” Martinez said.

Voce has had a very strong start to the year.  The group will continue to have a year filled with caroling, choreography, jubilant times and bonding. Voce members cannot wait for another successful year.