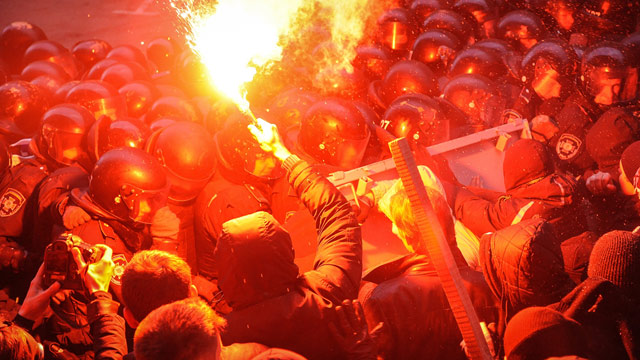 Photo courtesy of The Guardian.

Read another perspective on this topic: Russia’s annexation of Crimea is unjustified

Molotov cocktails are thrown, buildings are seized, petrol bombs are thrown, shots are fired, people are killed. All the reason why Russia decided to take Ukraine into its own hands. But despite the relatively bloodless and peaceful takeover, Ukraine has been put in a more fragile state than ever before. In fact, the world has never seen such turmoil anywhere else in decades, and it’s scary to think of what may come next.

Since November of last year, protesters have taken into the streets to protest the Ukrainian government because President Yanukovych withdrew from an agreement with the European Union for stronger diplomatic relations. Yanukovych previously gave his word that he would sign the EU integration pact. He did not sign it. Instead, Yanukovych backed away from the agreement in favor of closer relations with Russia. A former Soviet republic, Ukraine is still pressured by Russia. Both Moscow and Brussels had designs on Ukraine since the collapse of the Soviet Union in 1991. The whole situation can be best described as “political chess” between EU and Russia.

But Russia was never meant to lose this high-stake game. Seeing an opportunity to benefit from the chaotic situation in Ukraine, Russia forcibly invades Crimea without firing a single shot. A new pro-Russian government is set up in Crimea, and Russian personnel occupy the territory in “self-defense”. Meanwhile, on the eastern Ukrainian border, Russian troops build up and run military drills. The government in Kiev was powerless to react to the Russian aggression—and so was the rest of the world.

Gaining immediate support from the Russian parliament, Russian President Vladimir Putin quickly sends forces into Crimea to “protect Russia’s interests”. But what could Putin possibly gain from annexing Crimea? Aside from the slight territorial expansion, Russia would benefit from increased economic engagement with Crimea, mostly in the form of oil and gas investments. But the benefits of those investments would be immediately nullified by the economic sanctions set forth by the West. In fact, Russian stocks, securities, currency, GDP, etc, all have plummeted in value, putting Russia at risk of a sharp recession. So clearly, economic profit is not the one and only motive for Putin’s aggression.

But is there any political gain at stake here? Well, yes and no. Putin can assert his adeptness as a politician by showing the world he can get what he wants. Prominent head of one of the world’s longest-lasting superpowers, Putin is determined to show that his country can’t be bossed around by the West. Taking Crimea by force illustrates Russia’s strength as well as its desire to spread its influence beyond its territorial bounds, as it had at the peak of the Cold War. Russia very well had its “sphere of influence”—an arrangement of weaker countries that are subjected to the harsh political pressure of a stronger country—in Eastern Europe, until the collapse of the Soviet Union dramatically destroyed Russia’s domineering control. It is not entirely out of the question to consider that Putin plans to make Crimea (and maybe the rest of Ukraine) a satellite state, as to increase Russian influence and recreate that sphere of influence. It may be a bit far-fetched, but there’s only so many ways to interpret the mobilization of Russian troops in Crimea and on the east Ukrainian border.

Yet, it cannot be solely political gain because there are political losses too. Putin risks the threat of isolation from the international community. His actions elicited responses from all over the world, from current Ukrainian President Oleksandr Turchynov’s call for military protection against “potential aggression”, to the UK’s warnings that his actions will have “significant costs”. The EU and the US already placed economic sanctions on Russia, in hopes of getting Russia to withdraw its troops. Along with that, the US and the rest of the international community criticizes “Russia’s clear violation of Ukrainian sovereignty and territorial integrity”. However, Putin ignores the threats of isolation, trifles through the economic sanctions, and considers pressing even farther into Ukrainian territory.

So why does it seem everything we do is ineffective? We can slap on economic sanction after economic sanction, but quite frankly, Putin probably doesn’t give a damn. The western world essentially cannot do anything else without agitating the threat of war. Putin argues that the military intervention is necessary because of the threats (could be anything from pro-Western demonstrations to a neo-Nazi takeover) to the ethnic Russians living in the region. He even suggests he will send troops not only to Crimea but also parts of Eastern Ukraine. There have not been so many cases of territorial occupation since the Cold War, explaining why our political leadership lacks the experience with such disputes. US Presidents and their administrations during the Cold War dealt with one dilemma after another, often facing direct confrontation with Russia, and always on the brink of war. Nowadays, in the modern world, globalization and international collaboration took the place of these face-offs, rendering the world’s politicians rather inept at dealing with militant leadership (except Putin of course).

It is important to note that even though the takeover of Crimea appears to be a violation of Ukraine’s national sovereignty, everything that Putin did was actually within the bounds of the law. First, Putin did not actually exceed his presidential powers, and instead sought his parliament’s permission for intervening in Ukraine. Second, the Russian troops in Crimea are associated with the Black Sea Fleet, which have the right to be there under treaty agreements. Third, well over 60% of the population in Crimea are ethnic Russians, and probably favor the annexation. It makes sense that Putin would only take Crimea with popular support; without it, his justification for the invasion would crumble under the censure of the international community.

But regardless of the legality of Putin’s actions, the world views this as a step backwards as opposed to a step forward. Western leaders fear Putin’s disregard for international law, something initially put into place to stop these types of incidents. What was once a world of cautious leaders, afraid to overstep their boundaries, might turn into a world of territorial and political conquest. Remnants of the Cold War has arisen, and we can only hope now that Putin stops at Crimea and does not escalate the situation any further.