Making the case for Sealand, the world’s smallest nation 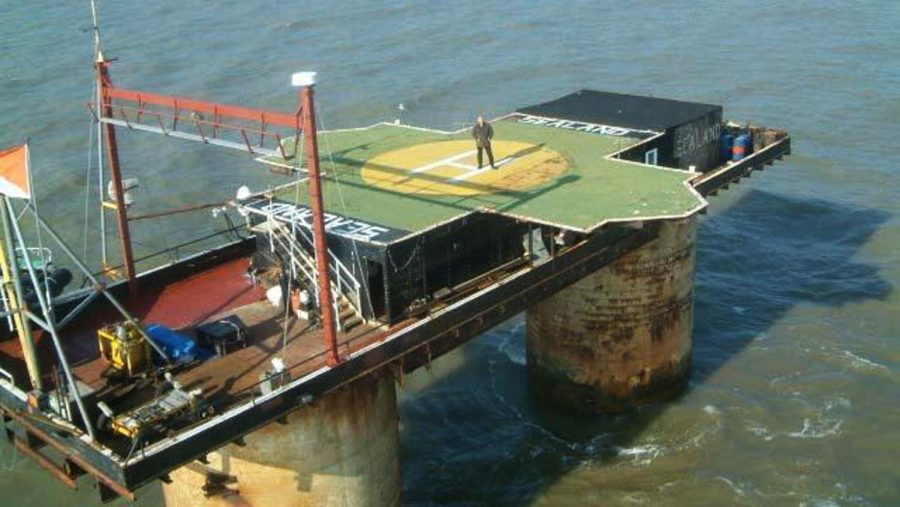 Prince Michael Bates stand on his own microtation, Sealand

Creating your own nation and establishing a hereditary monarchy seems nearly impossible, especially without declaring independence or fighting in a war. That’s why the legitimacy of a largely unknown micronation, the Principality of Sealand, was questioned upon its creation in 1967. Yet, despite the fact that the country has no diplomatic relations and is not recognized as a sovereign nation by any global powers, Sealand today has its own stamps, coins, passports, football team, and constitution, in addition to a flag, which is even mounted on the top of Mount Everest. Michael Bates, the current Prince of the Principality of Sealand grew up on the nation, which now contains modest living quarters, an exercise area, a chapel, and a kitchen.
The obscure history behind Sealand and its uprising started during World War Two when the British government built fortresses to defend its coast from German invasion. One of these forts, called HM Fort Roughs or Roughs Tower was operated by at least 100 British naval officers, but in the early 1950s, found itself abandoned. This fortress, however, would soon be occupied by Roy Bates, a British citizen, who eventually became involved in a “swashbuckling [court case] perhaps more akin to the time of Sir Francis Drake”, according to a British judge, in 1968.
In the years preceding the court case, Roy Bates operated a private radio station, titled “Radio Essex”, that bypassed “the draconian broadcasting restrictions of the time, which permitted little more than formal broadcasting by the BBC,” according to the official Sealand government. He broadcasted the station from the fortress Knock John, which was legally inside of the British territorial water three-mile radius. As a result, in 1966, Roy was brought to British court and convicted for illegal broadcasting.
After weighing his options, Bates decided to occupy Roughs Tower instead, which the British government built illegally in international waters, and after conversing with his lawyers, declared the new fortress an independent state, in 1967. He raised a flag and bestowed the Princess title upon his wife, which officially marked the beginning of Bates’ real court issues. The British government, according to the Sealand government, did not want to have a “Cuba off the east coast of England”.
Thus, the British government began destroying the fortresses they built during the war. From Sealand, the Bates family watched in terror as the other structures blew up and as floating debris passed by their own. When the British navy demolition crew eventually arrived within fifty feet of Sealand, it was aided by helicopters carrying explosives. British sailors yelled obscenities at Prince Michael, son of Bates, who fired warning shots at them. As a result, in November 1968, Roy and Michael were summoned to court under the United Kingdom “Firearms Act”. It was there in court, where Sealand received its first de facto recognition from a judge, who declared that the United Kingdom had no jurisdiction over the microstate.
To reach the kingdom’s territory, you’ll need a helicopter ride or, according to the New York Times, “a willingness to be hoisted by crane from a boat”. If you want to become nobility of the Principality, you must be born or adopted into the Bates family, just like with any other hereditary monarch. However, you can also purchase Lord and Lady, Baron or Baroness, Count or Countess, Duke or Duchess, and Sir or Dame titles. To become a Sealand landowner, you can also purchase land in perpetuity, from the official Sealand government.
Yet despite the fun and lighthearted concept of owning their very own nation, the Bates family takes things seriously. They created a constitution for the country and established their very own bureaucracy. That’s why an Emory International Law review on Sealand argues that it should be recognized and that international legal norms regarding country recognition need to be changed. There is little land left in the world to colonize and form nations with, but granting Sealand recognition would allow pioneering entrepreneurs to inhabit Earth’s final frontier: the sea. With the global population increasing and available land decreasing, humans may one day have to create artificial islands, such as Sealand.“E Mare Libertas”, the motto of Sealand, calls for liberty to the sea and perhaps for the international community to take note of the need for international recognition reforms.