Russia’s annexation of Crimea is unjustified 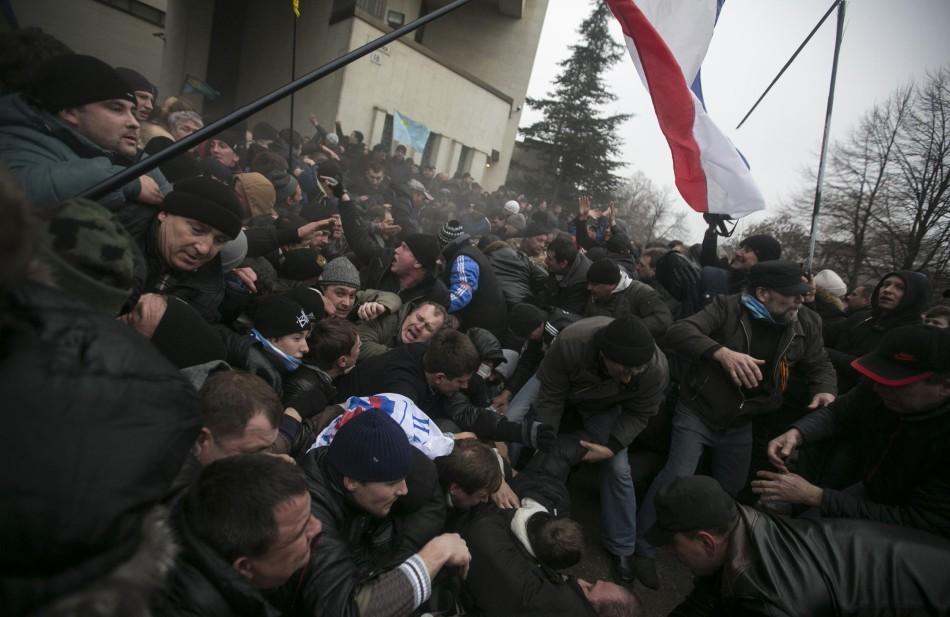 Russian soldiers clash with protesters near the parliament building in Simferopol, Crimea.

Read another perspective on this topic: The Ukrainian “Revolution”

February became a month of tension and strain for much of the world as the situation in Ukraine, especially in the Crimean Peninsula, escalated. Following the ousting of Ukrainian President Viktor Yanukovych, who aligned himself with Russian interests over Ukraine’s, Putin decided, of his own accord, to effectively invade Crimea under the guise of preserving the peace. The most recent move by Putin, the annexation of Crimea to Russia without recognized approval from either Crimea, Ukraine, or the world, serves only to further strain Russo-Ukrainian relations through aggressive action. As both the Ukraine deploys its troops and Russia rallies its, a new war may sprout up, disrupting a fragile peace in the Soviet Bloc. Putin must, in order to maintain relations with Ukraine and the rest of the world, diplomatically resolve the situation in a manner agreeable to all parties involved, though it is unknown if that will come to pass.

To nearly all international nations, Russia’s invasion of Crimea with over 10,000 troops with neither the approval of the Ukraine nor of the UN is seen as a violation of sovereignty and international law. Russia’s claim to the nation ended in 1991 following the dissolution of the USSR. After Yanukovych was ousted, Russia, under the guise of trying to preserve the peace, entered the peninsula with the condition that the nation reinstate Yanukovych, and later aimed to annex Crimea. Putin justifies his actions by stating that Crimea, historically, always belonged to Russia and therefore it was in his right to annex it. This sentiment is not shared. The United States has placed sanctions on Russian officials, the G8 has renounced Russia as a member, the UK has stopped all military exercises with Russia not mandated by treaty, and Russia has lost much power in the UN Security Council among various other actions.

Recent reports have shown Crimea’s support for a Russian annexation, however this is hotly contested due to the history of lies involving Putin and Russia. This is further supported by the recent Crimea-Russian treaty that effectively declared Crimean independence and acceptance of Russian rule. However, even if this may be true, since there are no further reports to the contrary, the independence of a province of a nation cannot be determined by that province alone, for it is a sovereign part of the nation as a whole. Therefore, Russia, unless with the consent of Ukraine, may not annex Crimea regardless of whatever historical or social claim it has. If the nation wishes to not rouse the ill-will of other nations, it must respect the borders of another.

It is unknown whether Putin has any further plans for Ukraine though he has stated his only interest is in Crimea. However, if Putin is allowed to annex Crimea, it is likely that he would see it as a gateway for further action. Crimea’s plans to extract its military from the peninsula is not an encouraging sign as it basically concedes the loss of the peninsula, though it will likely conduct further actions to regain control. The situation is still tense and unless it can be diffused by diplomatic means, might result in war between the two nations. All suggestions of US involvement should be taken with a grain of salt, as throwing in a power such as the US may be seen as trying to strong-arm Russia or, even worse, may provoke Russia to fully engage its military if it sees the US as a threat.