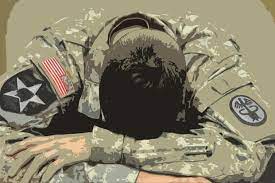 Over the years, mental health issues have become more prevalent in society and are starting to gain recognition for the damage they cause in people’s everyday lives. However, there are still preconceived notions about the types of people who struggle with their mental health. Oftentimes, news outlets on television solely focus on teens’ mental health, but why? There are so many other groups of people who struggle with mental health: the elderly, the LGBTQIA+ community, the homeless, and those in the military.
Those who serve in the military face a wide range of issues while serving and upon returning to civilian life. It seems as though many people associate only veterans with mental issues, but those still serving also struggle. There is a stigma that surrounds receiving treatment for mental health issues, and in the military, it could perhaps be even worse. According to mentalhealthfirstaid.org, 30% of those who actively served in Iraq and Afghanistan faced a mental health problem that required treatment. While considering statistics such as these, it is important to take into account that many people will not come forward with a mental health issue.
Returning from combat is difficult as well for many veterans because adjusting to civilian life is unlike anything anyone will ever experience in their lifetime except if they have served. A veteran is expected to go to the grocery store, pick up a carton of milk and return home without any issues. But how can they be expected to do this when in another country, they had to remain on alert at all times because, at any moment, they had to be prepared to defend themselves?
Those returning from the military and those still serving struggle with all different types of mental health issues including PTSD, anxiety, depression, substance abuse, and many other different issues. PTSD, or Post-Traumatic Stress Disorder, is one of the most commonly known mental health disorders veterans struggle with because these people have experienced so many near-death events.
The biggest problem, however, is the lack of assistance veterans receive when they return to civilian life. There are many resources available for veterans, like the US Department of Veteran Affairs, but the issue is that this department is not providing appropriate care for all veterans or enough treatment. When the government is looking to provide lifelong healthcare to veterans, they usually look for the veterans who have served longer periods of time and those who have suffered physical injuries, but those with physical injuries are not the only ones hurt. Every member of the armed services is impacted mentally, which these government programs are failing to address.
The government needs to provide mental health assistance to all veterans, and not just provide healthcare to some veterans who face physical injuries. Although some may argue and ask where the money is coming from to provide this treatment, there is only one simple answer. Taxes. And if that is not a good enough answer, draw from different funds. There is no excuse to not be providing the appropriate care for our veterans when these are the people allowing civilian Americans to feel safe every day. These are the people who allow us to walk to our grocery stores and not have to fear a foreign attack. We don’t have to be on alert and ready to defend ourselves at all times for fear of someone shooting at us, and that is because of our veterans and those serving in the military.
Military personnel and veterans face physical injuries, but they also face mental health issues and it is important that we all come to accept this fact and provide the appropriate assistance because perhaps more than anyone else, these people deserve it and deserve to be able to return to civilian life as comfortably as possible.