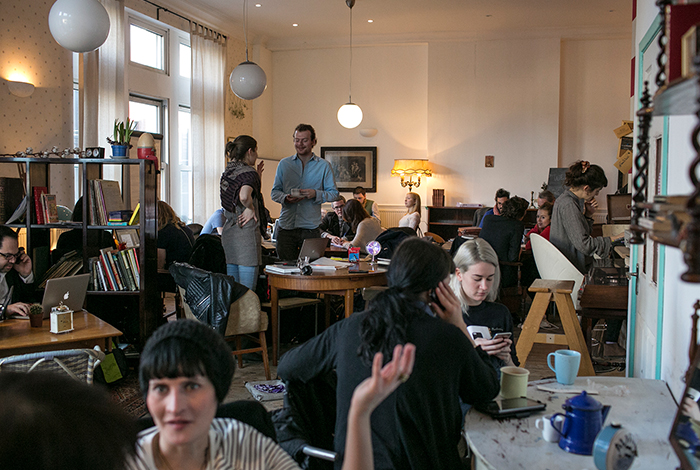 Guests mingle at a Ziferblat cafe.

Ziferblat puts a spin on your regular cafe

The new innovation for cafes all over the world is here. But the question is, will the trend catch on?

Ivan Mitin, owner of the franchise Ziferblat, created the notorious “anticafe”. Here, customers are not charged for the food and drinks they consume, but the time they spend in the cafe. The name Ziferblat derives from German and Russian, translating into clock face. Guests take a clock and set a timer, clocking in and out to record the time spent at the cafe. Mitin has opened 10 locations across Russia and Ukraine, along with new locations across the United Kingdom.

All food and beverages are complimentary, including snacks such as fruit, biscuits and cake. Customers have the freedom to make their own food in the cafe’s kitchen or brew a cup of coffee in the coffee machine provided. The price of an hour stay at Ziferblat costs a mere £1.80 in London, which is approximately $2.32.

The thing that appeals the most to consumers is the home like atmosphere Ziferblat creates. Mitin says he views guests as mini tenants not as customers. Each of his cafes have a cozy, unique look, filled with tons of couches and tables to make you feel right at home. Customers are urged to wash their own dishes, however it is optional . Guests often wash each others dishes, making it a social experience.

“Ziferblat reminds me of the idea of a treehouse – kids split together to build a small world of their own where the ‘stupid and artificial’ rules of society wouldn’t work.” wrote Mitin.

Critics argue that Mitin’s idea for an anticafe was inspired by the collectivist ideas Russians practice, but Mitin refutes this claim.  He explained to Business Insider that his idea was something that could be applied universally as his business expands. This conception has endless possibilities for expansion, as it can be seen as the new Starbucks or Barnes and Nobles, where people go to do office work.

Mitin emphasizes the importance of community and freedom with the logic behind his cafe. The cafes are open for organizing events, but, he sticks by one rule: no alcohol.

However, in Brooklyn, Glass Hour brings the first anticafe to the United States. Instead of paying by the hour, Glass Hour charges $6 for the first hour and 10 cents per minute that precedes. This two-floor cafe also includes a work area along with a game room equipped with board games, a foosball table and a PS4. Similar to Ziferblat, the space can be rented for 60 dollars for events such as baby showers, birthday parties, books clubs and more.

It is hard to tell if this type of business will create a new profitable twist to coffee shops, but it has proven successful thus far.