The Hamilton of 2017? The New Broadway Musical, Dear Evan Hansen, has got everyone talking 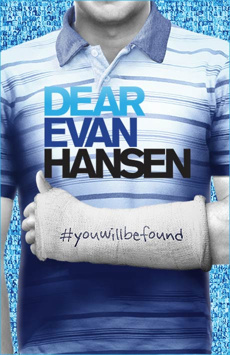 Dear Evan Hansen tells the story of a teenage boy, who gets caught up in the death of his classmate.

Dear Evan Hansen is a new original musical on Broadway that debuted in December 2016.  It tells the story of a teenage boy, Evan Hansen, becoming twisted into the commotion of a classmate’s death. Evan Hansen is a high school senior with a social anxiety disorder. Early in the show, his classmate, Connor Murphy, commits suicide, and a letter that Evan Hansen wrote to himself ends up in the Murphy family’s hands. They think that the letter is the note Connor wrote to Evan right before taking his life. Desperate for attention, Evan plays along with it and becomes invested in their life. The Murphy family now thinks Evan was Connor’s friend when actually the two never really talked to each other. However, now Evan is the only piece of Connor the family has left, and Evan has to decide whether to play along with this story or not.

Evan is played by Ben Platt, who also starred in the movies Pitch Perfect and Pitch Perfect 2.  Platt’s performance of Evan is stellar to say the least. The audience quickly becomes emotionally connected to Evan during his first song “Waving Through a Window” and roots for him even though he acts deceptively. While Platt’s performance is the most memorable, the other actors in the show do an excellent job as well. Evan’s mother is portrayed by Rachel Bay Jones, and Connor’s mother is played by Laura Dreyfuss.  Both of these mothers together perform the memorable song “Anybody Have a Map?” to open the show. This song shows how parents as well as teens can become insecure in their new roles as the teens grow older.

Benj Pasek and Justin Paul are the writers of the music and lyrics of this original musical. Steven Levenson is the book writer and Michael Greif is the director of this musical.

In addition to the fantastic performances and writing, the message of the show is also very memorable. The overall message of this musical is to make people feel that they are not alone and that everyone in the world matters. It is also expressing that everyone should be nice to others no matter what the conditions are. This show made everyone in the audience feel that they are important, and that they are not invisible to people. This show refers a lot to social media and the multiple ways it is used today. Social media in this play is used in a positive and negative way. The show depicts how viewing other people’s posts on social media can make people think that everyone else has a better life than they do. However, the characters in the story also use social media productively to create communities.