Technology and water: An unlikely pair 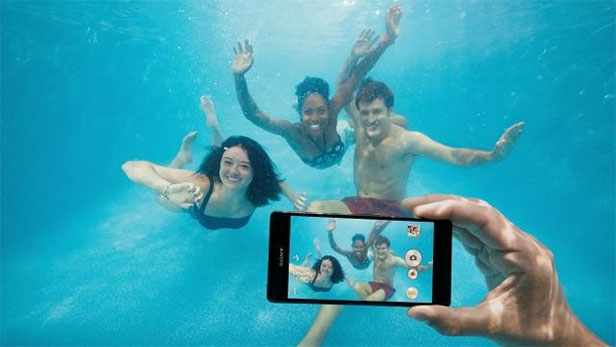 Underwater photographs have become a norm as technology progresses.

It wasn’t long ago that if you decided to walk out of the room while talking on the phone, the entire set would get ripped out of the wall, or someone would trip on the overstretched cord. The only way to communicate outside of one’s own living room was through the use of a payphone, or by using the phone of any establishment that was kind enough to offer it. In a time where connecting is all anyone does anymore, a world without mobile phones can seem lonesome.

At the time of their creation, cell phones meant communication for when one was out and unable to wait by the wall for a call. Although the phones came with long antennas and were much larger than even the iPhone 6 Plus, the invention was revolutionary in cellular mobility.

It’s no secret that water is the kryptonite of technology. While cell phones allow for people to walk and talk, people have begun to talk in places where phones weren’t made to last: the beach, the pool and even the bathroom. Sometimes, no amount of rice can save a phone that’s been dropped in the toilet.

However, due to advancements in technology, the ocean has been no match for the usually vulnerable cell phone. And as summer approaches, it’s important to find the best tools to capture the perfect underwater selfie or cannonball video.

Although it may be difficult to believe, the first underwater photo was taken in 1893 by Louis Boutan. Underwater cameras today are inexpensive and easy to find, but once people began to use their phones for cameras, water was- yet again- an issue. Cue phone cases such as the LifeProof, which promises to keep one connected every “soggy, snowy, muddy step of the way.” (As long as you triple check that every latch is covering every hole on the phone… and then check it again) Although it may be hard to access the touchscreen feature of a phone while using cases such as LifeProof, they provide means for accessible photography and quality pictures.

One can only wonder where technology will take us next, as almost nothing is as intimidating as the often unforgiving ocean. However, this may only mean it’s time to set up some underwater WiFi routers.