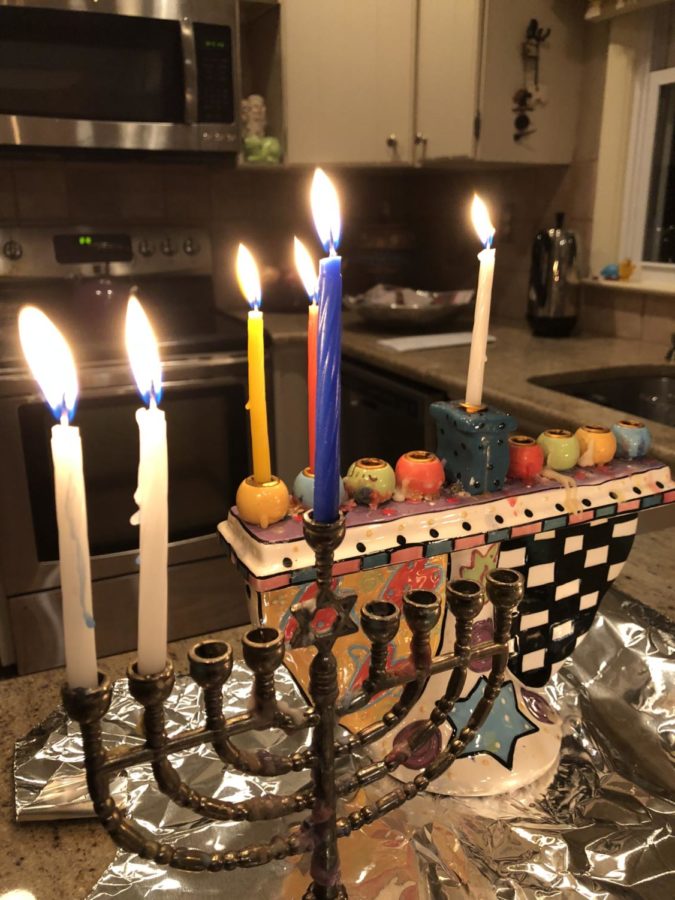 A Hannukiah on Hanukkah

“You have your menorah [and] you light your candles. We light the shamash and take the shamash and light each candle from right to left. We say the prayer… And then what we [used to] do… was hide the present in the house. And they would hide it under a blanket, hide it on a shelf, play hot or cold. Me and my sister would go and find it,” said Brett Kamen (‘18) about his family traditions for Hanukkah. Kamen’s family also has “Hanukkah stockings” that they hang in their living room. Hanukkah is the Jewish festival of lights (otherwise known as the Festival of Dedication). Many Jewish families have different ways of celebrating the holiday.

Some families use their menorahs as part of their tradition.

“We have some pretty special menorahs we’ve been collecting over the years. There’s one from when my mom was in college, some that we made when we were little, stuff like that,” said Jonathan Cohen (‘19).

Along with lighting the menorah, there are many foods and games associated with Hanukkah. Part of the tradition is to eat fried foods and play with tops, called dreidels.

“My mom will buy latkes [but] we don’t do anything huge on food. We buy gelt (chocolate coins), we play dreidels,” said Rebecca Raush (‘20).

Some people not only celebrate with their close family, but also have larger gatherings with extended family.

“My immediate family… we just celebrate at home every night. We light candles, sometimes we have latkes, we alwa

ys do something related to the holiday. Then my whole family, with my cousins, we have this one big family party every year,” said Cohen.

For some however, the shifting calendar of Hanukkah due to the Hebrew calendar makes it more difficult to celebrate with extended family.

“We used to [have family gatherings] because it used to fall on winter break so we would sometimes go down the shore and celebrate with my uncles and cousins. It was a fun thing… We all get together, we have fun, we hug each other, all that lovey dovey stuff,” said Kamen.

Just like any tradition, people have different favorite parts of the holiday.

“My favorite part of Hanukkah is probably lighting the candles with my whole family at the gathering. Cause all the cousins are there and crowded around [the menorah]. It’s a good time,” said Cohen.

Some others simply enjoy the candles.

“When I was little [my favorite part] was always getting presents… [and] the candles are always pretty. I appreciated how everyone on Snapchat had [menorahs] on their story,” said Raush.

Hanukkah is also the Jewish holiday that is usually closest to Christmas, so most Jewish families give present on Hanukkah.

“[We] kind of turned Hanukkah from a holiday to a gift-giving day like Christmas,” said Kamen.

But Hanukkah is more than a stand-in Christmas. It is a celebration of miracles that took place during the rededication of the Holy Temple in Jerusalem after the Maccabean Revolt which took place around 160 BC.

“ Jews were living in [Jerusalem] and a new [Greek] king came and he was restrictive and didn’t let us pray. And he didn’t let us openly practice our faith. So then there was a war” said Raush about the beginnings of the Maccabean Revolt.

“What I’ve always learned is that it’s a miracle holiday. My teachers always said that there were two miracles that happened. The first one is that we had our very small, puny army… and somehow our small army won the war against the Greek’s huge army. And then the second miracle was [when] we had gone back and were reclaiming the temple and looking for oil to light the menorah… there was only a little bit left. And the miracle was that this oil burned for eight days… And that is why we light the menorah,” said Raush.