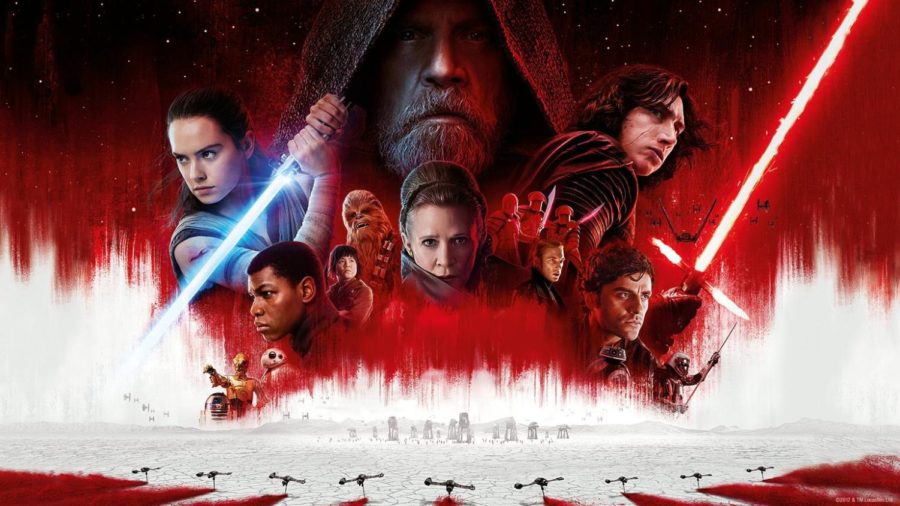 Star Wars: The Last Jedi is the latest installment in the Star Wars Franchise

Star Wars: The Last Jedi; A new thriller from a galaxy far, far away

Star Wars, the most prominent movie franchise in pop culture history, has returned with its eighth entry into the Skywalker saga; Star Wars: The Last Jedi. For the past two years since the highly-anticipated release of The Force Awakens, The Last Jedi has been subject to perhaps the same amount of hype but with the addition of fan-theories and speculation that The Force Awakens lacked. However, as with any Star Wars movie since Ret-

urn of the Jedi, it has received the same unforgiving criticism that the fans of Star Wars give towards any new movie.

With Star Wars: The Last Jedi, we see an expansion into the massive universe of Star Wars and we learn that “this is not going to go the way you think”, as Luke Skywalker says. With that said, this movie is best if you leave your theories at the door, because you might set yourself up for disappointment.

In many ways, The Last Jedi parallels The Empire Strikes Back, the renowned and undeniably the most iconic Star Wars movie. However, these moments in no way are exact clones of the original, as though it retains the same conflict of every Star Wars film, the fight between light and dark is done in a way new to Star Wars. Director Rian Johnson (who has directed films such as Looper and Brick) twists characters Kylo Ren/Ben Solo (Adam Driver) and Rey (Daisy Ridley) in a completely unexpected way. The Last Jedi explores the relationship between Kylo and Rey unlike any other pairing before, revealing new elements of the Star Wars universe that had been foreign to the canon story before. Likewise, the dynamic between Rose Tico (Kelly Marie Tran) and Finn (John Boyega) brings fresh ideas to the saga while retaining the classic elements of the originals.

With the passing of the beloved Carrie Fisher in 2016, speculation began regarding the fate of the iconic Princess Leia within The

Last Jedi. The film expands upon the character of General Leia Organa, who plays a fundamental role throughout the movie, while honoring her character and her importance in the overall saga. Luke Skywalker (Mark Hamill) is given a generous amount of screentime compared to the previous film and The Last Jedi gives insight towards his endeavors since Return of the Jedi, as he is tormented with the struggle that the Jedi Order last left him with. Other characters, such as Supreme Leader Snoke (Andy Serkis) and Poe Dameron (Oscar Isaac) drive the story of both The First Order and The Resistance forward respectively, through captivating and intense scenes.

Overall, Star Wars: The Last Jedi is an exciting, worthwhile watch and an incredible addition to the canon Star Wars universe.  The emotional aspect of it is tormenting, as the unexpected twists throughout the story may leave you stunned. However, for any Star Wars fan from the originals to the sequels, this movie is for everyone. The action, drama and character development throughout the film will no doubt leave anyone asking more questions which will hopefully be answered in Star Wars: IX. The Last Jedi is full of surprises to be sure, but welcome ones. There are ups and downs in the movie and it may leave you confused the first time you view it, but it will no doubt leave you with material to think about. As with any film as intriguing and action-packed as The Last Jedi, it’s worth a second watch. May the Eighth be with You!