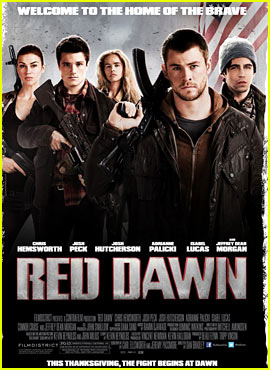 What movie do you get when you mix Drake and Josh, Transformers, Hunger Games and Thor? The name of this incredibly awesome sounding movie is… Red Dawn, starring Chris Hemsworth (Thor), Josh Hutcherson (Hunger Games), Josh Peck (“Drake and Josh”) and Isabel Lucas (Transformers). The movie’s release date is scheduled for November 21, 2012.

Imagine this. You wake up on a Saturday morning and you take a look outside. You hear faint screams, but you think you’re just hearing things because you’re so tired. All of a sudden, your neighbor’s house is devoured by a massive bomb. The ground’s shaking. Your heart’s beating very fast. People are running. What do you do?

This action/adventure flick seems rather exciting. Jed Eckert is returning home after serving in Afghanistan, and has no idea what he is in for. Matt, Jed’s brother, is somewhat angry with Jed for leaving him to join the army after their mother’s untimely death. He soon realizes that’s the least of his problems when he wakes up one morning to a shaking ground and bombs being dropped. He and Jed go outside to check out what’s going on, and all they see is a sky full of enemy planes. Jed and Matt soon understand what’s happening: the United States is under attack. A foreign army that calls itself the “People’s Liberation Army” is occupying their city, and they are doing it ruthlessly.

Eckert, who has served in the army, takes Matt and a scrappy group of high schoolers under his wing, and escapes into the Cascade Mountains. This group of people is quickly transformed into combat-ready, sharpshooting freedom fighters that will eventually become a nationally known sign of resistance to the citizens of the United States.

This “surprisingly fun action flick,” based on a 1984 film featuring Patrick Swayze, is expected to do well in November, according to Moviebuzzers.com. It’s hard not to be excited to see how it turns out in November.