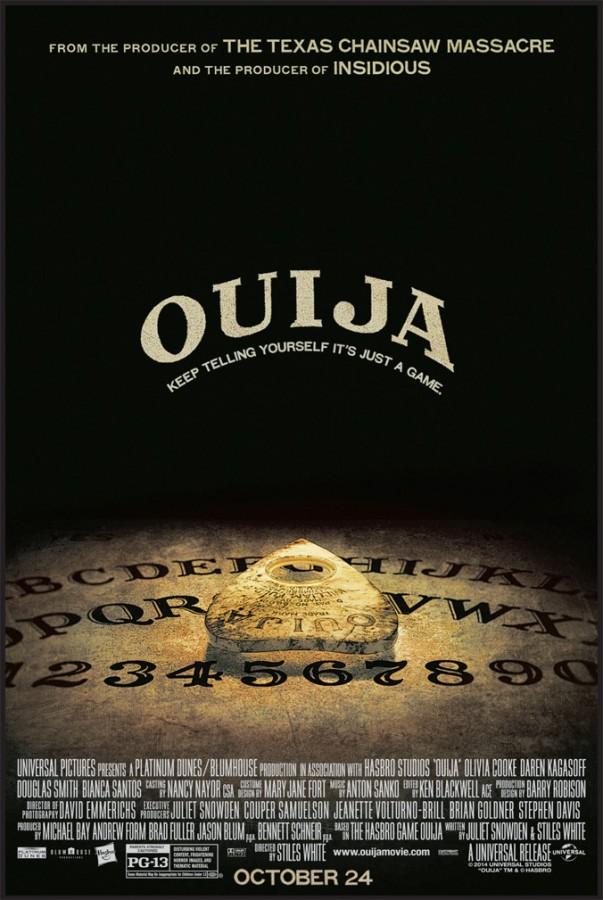 Ouija, a Halloween horror movie? Or a movie that causes people to go bored out of their minds? Many horror fans think the latter.

Ouija is a movie based on a popular board game made by the widely known toy company, Hasbro, implicating a common horror story associated with the game known for “communicating with the deceased”.

The movie was likely made for the purpose of advertising the Hasbro toy company for its production and distribution of Ouija boards. Throughout the movie, the Ouija board with the company Hasbro printed on it, frequently appears in every scene featuring the board. This form of advertising is a strange idea for marketing, making it appear as if the Hasbro Ouija board can summon demons to kill people’s friends so that more people will want to buy it.

The plot, per se, happens to be a similar story to many campfire tales that are told about the Ouija board and its demonic hauntings. The first-time director, Stiles White and co-writer Juliet Snowden, craft a generic horror movie based on the supposed Ouija hauntings.

A girl named Debbie, played by Shelley Hennig, messes around with a Ouija board and much to everyone’s “surprise” she dies seemingly by hanging herself with Christmas lights. Laine, played by Olivia Cooke, does not believe the supposed story of Debbie’s death and convinces her friends to investigate the death by trying to contact Debbie with the same Ouija board that had supposedly killed her. Laine and her five friends, her boyfriend, Debbie’s boyfriend and her sister investigate deeper into this “mystery” despite various warnings. Soon a demented spirit haunts them and they are each picked off one by one as they try to figure out how to stop the demon until Laine and her sister are left.

The plot is somewhat effective in a horror sense but highly unlikely considering a Ouija board made from a piece of wood that is mass produced in a Hasbro factory, is probably not mystical or demonic in any way. If a Ouija board does happen to be a gateway to the underworld, I suppose you do not get a refund.

Also, by reading the title one can basically guess what happens without watching the movie. What do most people expect from Ouija but a wannabe Oscar-winning horror film? The scares were mostly sudden, such as loud noises that turn out to be one of Laine’s friends or something simple. The acting was basically poor scripted dialogue, screaming and being dragged off into the dark.

The death of Debbie was just ridiculous, but those Christmas lights were a nice feature. What the moral of the movie seems like, is to buy more of Hasbro’s toys such as the Ouija board, so people can eliminate friends and blame it on a cracked-up ghost.

Overall, Ouija is not as good as the commercial says it is. Do not go see it if you are expecting an awesome horror-filled experience that you will remember for years to come.