Going to three concerts in exactly two years is by no means impressive, as there are some people who go to one, or more, concerts weekly. However, just over three years ago, I was ready to admit defeat and sit on the sidelines until the end of time (okay, maybe not that long). My favorite band, Jack’s Mannequin, was opening for Panic! At the Disco at the Wachovia Center, and I could not go.

It wasn’t that I was busy that night or had a parental restriction: I simply had no means of getting there, as my parents are not “let’s-drive-our-daughter-into-a-city-we-rarely-go-to” people. And, even if I did manage to cajole them into driving me, I had no one to go with. Cue a new friend at the time, who turned out to share my love of Jack’s. Less than a week before the concert, we had tickets.

Sitting up in the nosebleeds, I could only think one thing: this was the most amazing moment of my life thus far. Just a few short weeks afterward, I read online that Jack’s would be returning to Philly in February, this time at the Electric Factory. I literally spazzed out in my voicemail message to my friend, informing her of the date and time, not giving her the option to say no at all.

Then, we found out that Sophomore Cotillion, our class dance, would be held on the same night. Honestly, the decision was the simplest one that someone could make. Of course we’d skip the dance and go rock out to Jack’s Mannequin, who would be headlining this time.

As we jumped and screamed and sang, my mind was in disbelief. I was maybe 100 feet away from my idol, the lead vocalist/pianist Andrew McMahon. Straining my vocal chords to the point of a hoarse voice and sore throat muscles for the next week was the least I could do to worship this amazing individual whom I consider holy.

I was in absolute ecstasy until I discovered the next morning that a friend of a friend stayed after for a little while and MET Andrew. Needless to say I was jealous and heartbroken, but I was still in awe of my fabulous experience.

This past summer, I missed Jack’s for a countless time as they opened for Paramore. Thus, when I found out they were coming to the Theatre of the Living Arts precisely 18 days after my birthday, I knew I needed to go. Thankfully, I was able to get tickets right before the show sold out. And, after finally finding someone to go with and after a few false alarms (read: mild heart attacks), it was a dead-set, locked plan.

Walking four blocks in the freezing cold from the PATCO station to the TLA in the dark seemed like a normal activity to me last Tuesday night. I was walking to visit my beloved, my life in melody.

Jack’s Mannequin didn’t appear on stage until after nine. But, I have to say, if I had to wait for anyone for any amount of time, I’d wait for Andrew McMahon. The man has overcome acute lymphatic leukemia and still chooses to write music and travel across the country for his very loyal fans. Time was the least I could give him. It was completely worth it.

The first song of the night was “Crashin,” a tune with a catchy chorus and incredible piano hooks. “Spinning” was next, which just made me melt inside as it is probably my favorite “fast” song on their new album, The Glass Passenger. Other songs played throughout the night were “Miss America,” “Bruised,” “Annie Use Your Telescope” and Something Corporate’s “Cavanaugh Park.” Additionally, the cancer-inspired operatic “Caves” was also played.

McMahon’s voice live is identical to his recorded tracks. But, there is no need to worry about lip synching, as he is known to sing the wrong or alternate lyrics to his songs. As I stood there, this time maybe 50 feet away, I knew I would try to go to as many JM concerts as I possibly could from that day forth.

In the encore, McMahon played “Hey Hey Hey We’re All Gonna Die,” an unreleased song which prompted The Glass Passenger. Even more exciting is the fact that this song directly involves the TLA, the very venue in which we were all standing.

Although he is a musician, McMahon often takes breaks in between sets to talk to his audience, often joking around and commenting on the shouts he receives. For example, the audience that I was a part of was one of the most “benevolent” he’s ever seen, because those standing at the barricade literally wiped up some water he mistakenly spilled.

McMahon chose one of these breaks to share with the audience that his charity for leukemia, the Dear Jack Foundation, was able to recently raise $100,000 for Light the Night, the Leukemia & Lymphoma Society’s (LLS) annual walk to raise funds for the organization. This amount “quadrupled [their] previous efforts.” As a donator this charity myself, I felt especially proud of this accomplishment.

In two years, I’ve been to three Jack’s Mannequin concerts, two of them sold out. I can only hope I make it to more. Perhaps at concert number four I will finally be able to meet my idol. 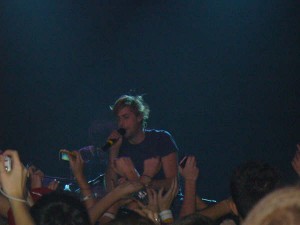 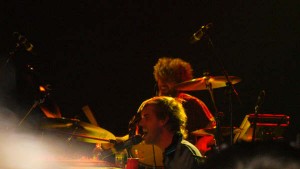