Harry Potter Countdown: Day 4, From Text to Film: a Reflection on the Harry Potter Series 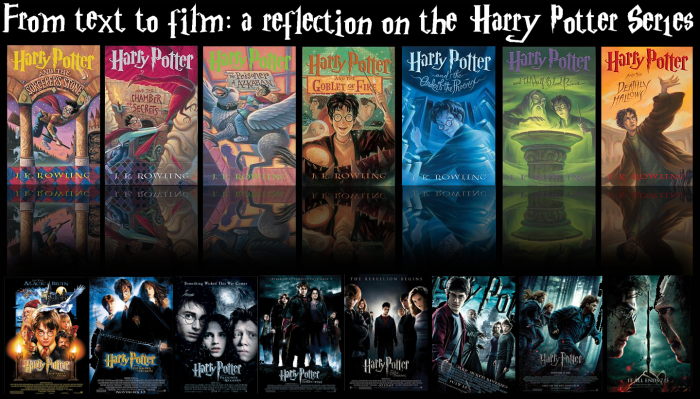 As the final installment looms closer, many Harry Potter fans have taken time to reread and re-watch the books and movies that have enchanted audiences everywhere. J.K. Rowling’s book series has won the hearts of readers worldwide, and those who have remained faithful to the series have watched it flourish. Rowling’s world of magic has developed not only into a best-selling book series, but also into a record-breaking movie franchise. Inevitably, as the books were interpreted into movies, changes were made to translate the stories into film more easily. This was painful for many fans since those touching scenes that make novels incredible were occasionally left out. With the end of the Harry Potter era rapidly approaching, now is the time to reflect on the novels and the movies, which attempted to translate the magic from the series onto the big screen.

Harry Potter and the Sorcerer’s Stone

In 2001, Harry Potter and the Sorcerer’s Stone, premiered, removing many key elements. A few minor details, such as Harry and Draco’s first meeting in Madam Malkin’s robe shop are removed from the movie. Dumbledore takes away Norbert, Hagrid’s dragon, in the movie, but in the book, Harry and Hermione take him by hand to be removed. Consequently, the reason for their detention in the Forbidden Forest is also changed, and Ron is added to the group that attends the detention in place of Neville. Additionally, Quirrell’s troll room and Snape’s potion riddle are removed from the protections of the Stone altogether.

Harry Potter and the Chamber of Secrets

Released in 2002, Harry Potter and the Chamber of Secrets remains largely faithful to the novel. Though it was an interesting chapter in the novel, Nearly Headless Nick’s deathday party is removed from the movie.

Harry Potter and the Prisoner of Azkaban

In 2004, Harry Potter and the Prisoner of Azkaban premiered as the least successful of the Harry Potter movies. In the film, when Harry and Hermione go back in time, they impact their present selves by throwing stones at themselves and howling to protect themselves from Lupin, the werewolf. In the novel, Harry and Hermione stress the importance of not interfering with the present and there is no confrontation with the werewolf. But most importantly, the origins of the Marauder’s Map are not revealed in the movie, and Harry sees Pettigrew’s name on the map, despite the fact that Lupin sees his name in the novel.

Harry Potter and the Goblet of Fire

Because the next installment, the Goblet of Fire, is longer than the three books prior, the film staff reduced scenes and concepts to transition from text to movie, creating a film that is very different from its novel counterpart. The three Death Eater trials Harry witnesses in the Pensieve are merged into one memory and Winky and her role in Barty Couch Jr.’s escape are not even mentioned. Along with the absence of Winky came the removal of Dobby from the film, so that Dobby is not able to give Harry the Gillyweed for the lake challenge.

Harry Potter and the Order of the Phoenix

Despite the fact that the Order of the Phoenix is the longest of any in the Harry Potter series, the film version is shorter than its predecessors; hence, much is omitted from the movie. When Dumbledore’s army is in need of a place to hold their meetings, Dobby yet again comes to Harry’s aid and shows him the room of requirement. However, like the movie prior, Dobby is removed from the film. Additionally, many memorable scenes from the book were removed, like most of Fred and George’s pranks before their dramatic exit from Hogwarts. Finally, when Harry sees Snape’s memory, his mother Lily’s role in the memory is absent. This movie, more than any other, serves as a confusing watch for those who have not yet taken up the series.

Harry Potter and the Half Blood Prince

The Half Blood Prince was released in 2009. The book begins with a meeting between the muggle prime minister and Fudge, and it introduces the new Minister of Magic, Rufus Scrimgeour, while the film omits the character. In addition, most of the memories and background of Tom Riddle are removed from the movie, while a scene involving the burning of the burrow is added to the movie. Besides these obvious removals, a more unnoticeable difference will prove to make transition into the final movie more difficult: the removal of the diadem scene. Although Harry placing a battered tiara on the head of a bust might have seemed silly, the lack of the tiara in the coming movie will have to be accounted for.

In November 2010, the first half of the seventh movie of the Harry Potter series was released. Because the seventh book was split into two movies, this movie remains as true as possible to the book itself. Most noticeably, Phineas Nigellus Black was, yet again, removed, Potterwatch was not mentioned and much of the ‘Dumbledore’s background’ aspect was ignored.

The anticipation leading to the final movie can be described as both awareness of an end to the Harry Potter era and also an intense longing to witness the final installment. Whatever the final movie may bring, both the books and the movies released will continue to ignite feelings of magic in the hearts of future generations.