Get Hard displays crude humor between Ferrell and Hart 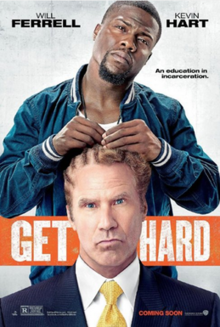 The new comedy film, Get Hard, starring Kevin Hart and Will Ferrell, makes it hard not to laugh a few times, even if Hart and Ferrell do not show their true potential in the movie. Considering the film is rated R, it is littered with abundant race jokes, silly actions of the characters and the recurring theme of sexual assault jokes, all of which seem to be the main source of comedic inspiration.

Millionaire hedge fund manager James King (Will Ferrell) is engaged to Alissa (Alison Brie), who is the daughter of his boss, Martin (Craig T. Nelson). At his engagement party, James is arrested and jailed for fraud and embezzlement. Despite James’ plea of innocence, the judge finds him guilty and sentences him to ten years in San Quentin, giving him 30 days to get his affairs in order before going to prison. Fearful of jail time, James turns to his car washer, Darnell Lewis (Kevin Hart), to prepare him for prison life. He offers Lewis 30,000 dollars for advice on how to survive in prison, assuming that Lewis previously went to prison because he is African-American. Lewis agrees to the deal, even though he has never been to prison, and begins to train King to toughen up and “get hard” to survive in prison.

The comic reference to race in Get Hard could hardly be simpler or more obvious. Ferrell is white while Hart is black. Many jokes involve racially stereotypical basis. Jokes about race are considered a very controversial matter. Though these types of jokes have been a source of humor for a long time, some have proven to be more unacceptable than others. Nevertheless, somebody is likely to be offended by these types of jokes. The approach that the producers of Get Hard took was to pummel the audience with a multitude of jokes, both bad and good.

If the verbal jokes do not work, then the movie resorts to some more obvious silly actions. It may be Ferrell’s consistent use of strange curse words that gives the audience some chuckles, or Hart’s well-played impersonations of the different populations in a prison yard.

The plot of the film is somewhat exceptional, but the enactment of it is mostly gags until the very end as the plot finally comes to a full circle. But, the movie was still put together based on placing funny actors, such as Ferrell and Hart, into situations in which they can make constant jokes and gags that would be apparent in a certain setting, regardless of whether they make sense or not.

Both Hart and Ferrell seem like the ideal comedic duo with different methods of comedy bouncing off one another. Their relationship generates a well orchestrated ensemble that is very likeable and acceptable by the audience. Although both of the actors’ performances offered many people a good laugh, they were definitely not as stellar as they could have been.