Before I Fall tells the story of a teenage girl who seems to have the perfect life, until she gets stuck in time 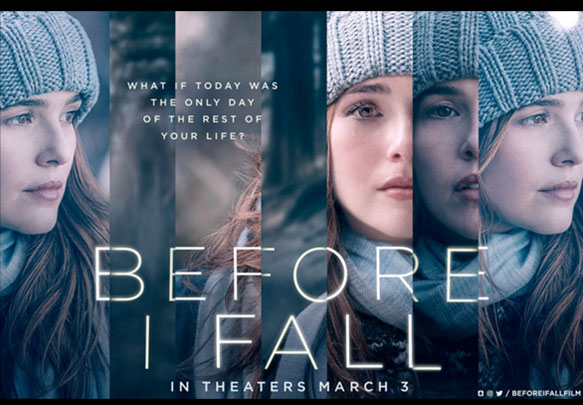 Before I Fall tells the story of Samantha Kingston, a girl who seemed to have everything.

Before I Fall is based off a novel by Lauren Oliver that follows a day in the life of Samantha Kingston, a high school senior that pretty much has it all: a dreamy boyfriend, a close-knit group of friends and a pretty face. All is well until night falls and Sam and presumably all of her friends die in an incredibly foreshadowed car accident coming home from an eventful party. However, the next morning Sam finds herself back in her own bed, completely unscathed. She goes about her day with a strange sense of dèja vu before realizing that she is, in fact, reliving the previous day. Sam has to go through the same day over and over again until she makes all the right decisions, and only then will she be able to really die.

The premise of the movie strongly mirrors Groundhog Day (1993), a comedy starring Bill Murray as an arrogant weatherman that has to relive the same day until he changes for the better. While Before I Fall features the storyline in a relatable high school setting, it takes a more serious approach to the idea making for a rather dreary movie in entirety.

The problem with the story is that when Sam realizes that she has to be a better person, which happens pretty quickly, after a few days of frustration she then goes through a rebellious phase. When that doesn’t work, she again goes back to being a better person. The sequence doesn’t make sense.

Sam’s small acts of kindness in no way compensate for the years of damage she had done on her peers. After previously making fun of a gay classmate, one day Sam compliments her on her shoes. Not exactly a full redemption.

Zoey Deutch, who played Sam, did what can only be described as a mediocre job; it wasn’t too bad, but she didn’t deliver anything extravagant. She had trouble portraying a nasty character in the beginning, especially comparing to her co-star Halston Sage, who made an excellent mean girl as Lindsay. Ally (Cynthy Wu) and Edoly (Medalion Rahimi), the other girls in Sam’s friend group, also did a good job considering what little lines they had.

The movie would have been far more interesting had the main character been Lindsay instead of Sam. Lindsay has an enticing backstory and is overall a worse person than Sam ever was. Since Sage was the best actor in the movie, she would have made the movie all the more enjoyable.