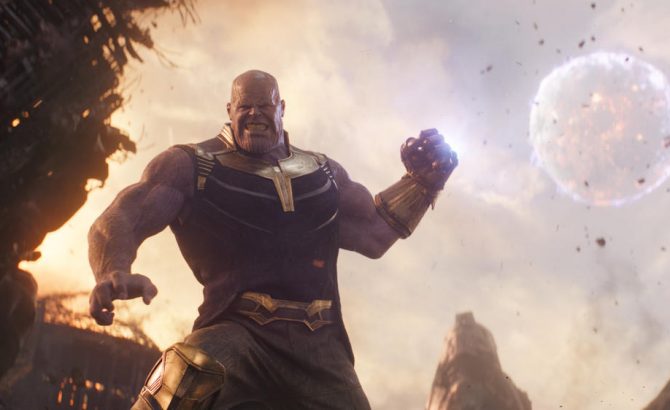 Throughout the past decade, the MCU has become the world’s greatest “television” series. Every “episode”,  or solo film, either introduces or advances a character/group’s development and importance in their universe. Avengers and Avengers: Age of Ultron served as season finales for “Phase 1” and “Phase 2”. While lurking in the shadows, the eighteen “episodes” have come to an overarching head in Avengers: Infinity War, the first film of two for the Marvel Cinematic Universe’s climax.

The Russo brothers had a near impossible task. Writing a story that offers great humor as well as great emotion. Giving over twenty characters

a purpose. Having an extremely well development and menacing villain. Most of all, to surpass the fan’s lofty expectations. And they did it. Avengers: Infinity War is a superhero film like no other.

Avengers: Infinity War is the culmination of the Avengers, Guardians of the Galaxy, Spider-Man, and Doctor Strange as the heroes must join forces to stop the oppressive Thanos (Josh Brolin) from collecting all six infinity stones. The Avengers are split up throughout the galaxy and have been greatly affected since their last team-up in Age of Ultron. Thanos, if he has all six stones, will use their unlimited power to wipe out half of humanity.  The heroes are forced to put away their differences one last time to contend with the most powerful being in the universe.

As most of the audience has already been emotionally invested in the heroes throughout their respective solo and team-up films, it was crucial for Infinity War to be “Thanos-centric”. The Russo’s were not lying when they said it is a Thanos story, and all for the better. Thanos is the star of the film and has become the definitive MCU villain.

Thanos is evil to the highest degree, but not without reason (at least in his mind). Unlike most marvel villains who are just there to move along the hero’s arc, Thanos has a reason, an understandable one, for the destruction he lays upon the universe. As well as being a character, not just a plot device, he is as menacing as the fans hoped. Within minutes of his introduction, you feel his god-like presence and a sense of desperation amongst the heroes to defeat him. Without a doubt Thanos is the best part of Infinity War.

Along with Thanos, the film’s ability to combine humor with emotion is unlike any other MCU film. Once again, whoever the comedic geniuses are that work for marvel hit it out of the ballpark. The comedy in this film, especially from Guardians of the Galaxy, is hilarious without taking away from the rest of Infinity War.

There are some gut-wrenching and emotional scenes throughout this film. You can feel the fear from the characters as they are scrambling for a way to defeat Thanos. The emotional impact this film has on hardcore fans (myself included) is huge. Along with the emotion involved, there are several twists and turns that are not expected. As always, the core heroes are fantastic, but we have had ten years of their reviews.

Now having seen the film twice, I can say without a doubt it is the best MCU film to date. It shatters your expectations and leaves to breathless. It’s going to be a very long one-year wait until Avengers 4.