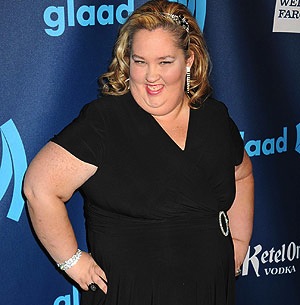 Look out Sugar Bear, Mama June is stepping out!  Recently, it was reported that June Shannon, also known as Mama June, has made a pivotal change in her health. June supposedly lost a whopping 115 pounds in the past few months.

As a fairly new reality show on TLC, with only two completed seasons, Here Comes Honey Boo Boo is a spinoff from the TV series, Toddlers and Tiaras which airs on TLC as well. Immediately, Alana “Honey Boo Boo” Thompson stole the spotlight away from the other contestants performing on the show and won her own show to help show the world how a not-so-typical redneck pageant winning eight-year-old spends her days.

Although Mama June claims that she has not drastically changed her diet, she credits “being more active with the show” for shedding the weight. She admits, “when I got on the scale, I was very, very shocked… I used to weigh close to 400 pounds.” Rumors spiraled that her weight loss stemmed from an incentive to look extra “beautimous” for her wedding day, which aired on national television this past September.

June shockingly shared that “lately, you see a lot of men who like thick girls.” Thankfully, June met the love of her life, Sugar Bear—also called “Shugie” who is incredibly accepting of her image.

June has been with Mike “Sugar Bear” Thompson for the past nine years and she resides with him and her four daughters in a small town in McIntyre, Georgia. June and Sugar Bear share their abode with their only joint offspring, Alana, and June’s other daughters, Lauryn, Jessica, and Anna, nicknamed, “Pumpkin,” “Chubbs,” and “Chickadee,” respectively.

It is no doubt that this family lives every day to its fullest. A typical day can include anything from bobbing for pig’s feet to taking a dip in a mud pit.

We can only hope that June will keep up with this weight loss and back off from her ever-so- famous “sketti” infused with large sums of ketchup and even larger amounts of butter.

Remember to catch the next season of Here Comes Honey Boo Boo starting this January on TLC!  And please, Mama June, don’t lose all of that “vajjiggle-jaggle!”