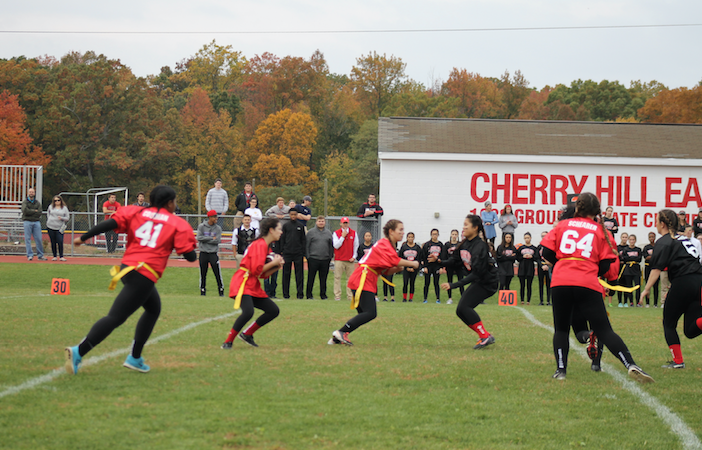 The experienced Senior Powderpuff team defeated the Juniors 50-14 in the 2015 Annual Powderpuff Game on Sunday, October 25.

The Juniors started the game with possession, ready to flex their offensive weapons. Dahyo Coleman (’17), quarterback for the Juniors, faltered at first but, after getting a feel for the game, launched the ball down field on fourth down and long. Senior defense forced a fourth down play once again, but Coleman confidently took the snap, scanned the field, and connected for a big pass down the field. In the red zone, the Juniors ran a read option, and when Coleman saw a hole in the defensive line, she hustled into the end zone.

Erica Thunberg makes the pat (’17), which is two points in Powder Puff rules, to put the Juniors up 8-0. Seniors look to respond but could not find any yardage, and were forced to punt. Kyle Ramkissoon (’17) took the hand-off at around the 50-yard line and found her way into open field. She was off to the races, breaking away from the Senior’s defense for a rushing touchdown.

“That felt good. I don’t know what just happened. I got away from them and just ran,” said Ramkissoon following her rushing touchdown. The extra-point was no good, making it a 14-0 lead for the Juniors.

As the first quarter ends, the Senior’s offense shows comes alive as it gets into the red zone before the whistle blows. Only a few plays following the start of the second quarter, Senior quarterback, Megan Miller (’16), made her way into the end-zone for a rushing touchdown. The pat is missed, and the Juniors’ lead is cut down to 14-6.

“It felt good because the Juniors [were] really confident they are going to win. I’m happy to help out the team this year, especially since there was a lot going against us last year. We are just working really hard right now,” said Miller getting the Seniors’ first points of the game.

The Senior defense comes out strong and stops the Juniors on fourth. With possession around the 50, Danielle Rosenthal (’16) takes the handoff. She shook off the junior defense and runs for a huge rushing touchdown.

“I just found a hole, broke through it, got a touchdown, and now I am hype,” said Rosenthal. The Seniors suddenly looked like a new team , but still trail the Juniors 14-12 after another missed pat.

I just found a hole, broke through it, got a touchdown, and now I am hype ”

A rattled Junior offense can not seem to string anything together causing a turnover on downs. Seniors score again before ending the first half. A second quarter, dominated by an experienced Senior class, resulted in the Seniors leading 20-14.

The Seniors began the second half with all the momentum of the game behind them. As though they were running downhill, the Seniors work their way into the end-zone, and Miller gets her second touchdown of the day. Seniors now tack on a 26-14 lead, and the Juniors cannot come up with a response.

The third quarter ends 26-14, with Senior possession deep in Junior territory. A nonexistent Junior offense and an impenetrable senior defense result in a commanding fourth quarter. Alyssa Luma (’16) rushes for two touchdowns and Miller connects with Tara Strauss (’16) in the end zone to make it 50-14 at the final whistle. The Senior Powderpuff team went on a 50-0 run to win the game 50-14.

After the Juniors ignited the first quarter, their flame was smothered by a seasoned Senior team. The 2015 Powderpuff Game Title belongs to the Seniors, the Class of 2016.

Juniors start the game with possession, ready to test the senior defense #powderpuff

Megan miller for seniors took it all the way for a touchdown , extra point no good, score is 26-14 seniors #powderpuff — Eastside Online (@EastsideOnline) October 25, 2015

Tara Strauss takes screen pass to get the first down deep in the junior territory. #powderpuff — Eastside Online (@EastsideOnline) October 25, 2015

Megan miller connects with Tara Strauss in the ends zone for a touchdown, seniors up 44-14 in the fourth quarter. #powderpuff — Eastside Online (@EastsideOnline) October 25, 2015

Thank you for tuning in another great year of powderpuf. Tweeting by Sydney Steele and Luke Hinrichs #powderpuff ??

Powderpuff Pictures during the game 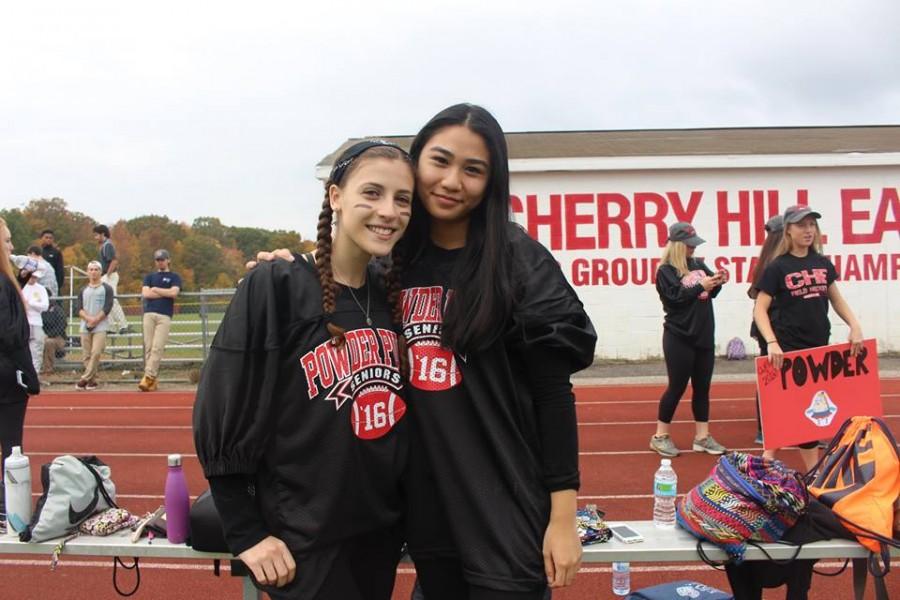