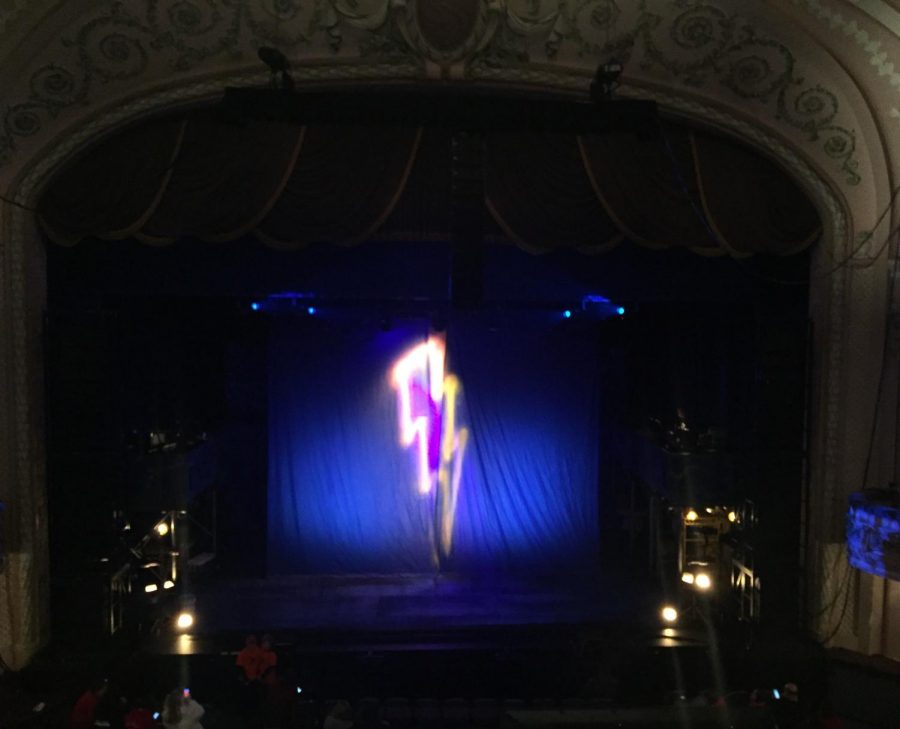 A lighting bolt is projected on the curtains before the show starts.

One would think that the cross section between musical theatre fans and fans of Rick Riordan’s Percy Jackson and the Olympians would be rather small, yet the off-Broadway run of The Lightning Thief: The Percy Jackson Musical has graduated from a sold out run in New York to a national tour.

The musical is adapted from The Lightning Thief, the first in a series of five books starring Percy Jackson. Percy finds out that he’s a halfblood – child of a human and a Greek god – and must go on a quest to retrieve Zeus’s stolen lightning bolt and stop a war between the gods.

The musical mostly follows the same plot as Riordan’s The Lightning Thief, introducing fans to Camp Half-Blood as its never been seen before. The show has a minimalistic set and cast, with most actors credited as playing more than one character. The most outstanding voices in the show are James Hayden Rodriguez (Luke and others) and Jalynn Steele (Sally and others).

The musical stars Chris McCarrel as Percy Jackson. He is, unfortunately, the least powerful vocally out of the cast (though his voice has a lot of emotion in it). Kristin Stokes perfectly captures Annabeth’s fire and wittiness and Jorrel Javier (Grover) brought the audience to tears with “The Tree on the Hill.” Javier had big shoes to fill, as Be More Chill’s George Salazar originated the role of Grover, but he pulled it off spectacularly.

The musical’s book was written by Joe Tracz (who wrote Be More Chill with Joe Iconis) and has music and lyrics by Rob Rokicki. The show is directed by Stephen Brackett, who directed the off-Broadway run of Be More Chill and is set to direct the show once it moves to Broadway’s Lyceum theatre.

You can see the similarities in stage design and writing between The Lightning Thief and Be More Chill. Both musicals have snappy, funny dialogue and minimalistic but powerful staging. Before The Lightning Thief even starts, sound effects of thunderstorms bounce around the theatre. The stage has 6 LED light columns going up the stage that can turn into the fires of the underworld or claps of lightning. Saturated colors from flood lights fill the stage at every opportunity.

But where the musical shines best is in its interpretation of Percy Jackson and Camp Half-Blood. It tells a compelling and touching story while paying homage to some of the most beloved moments of the series (jokes about ‘dam snacks’ at the Hoover Dam, Bianca and Nico di Angelo, Mr. D constantly messing up Percy’s name). The playwrights managed to cut down the story while keeping the soul of Percy’s journey intact (something that neither of the movies were able to do).

When a theatre is full to the brim with adults and teenagers alike in orange Camp-Half Blood t-shirts, you know the show is doing something right.