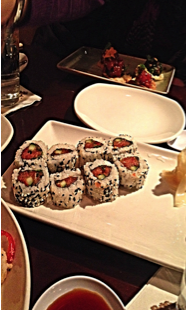 The mood is set once you walk through the revolving doors at the newly renovated P.F. Chang’s in Mount Laurel. The pendants descending from the ceiling create dim lighting above the table. The warm shades of brown invite you into this modernized Chinese bistro.

Escorted immediately to a booth, my eyes were drawn to the painting above the bar that had not been renovated, unlike the new seating arrangements. The space was more open in front of the bar and there were a perfect variety of high tables, low tables and booths. It was easier to speak with my party because the booth had a partition that blocked out extraneous noise, making it more comfortable to communicate orders and conversation.

The waitress was very kind and open to the many dietary restrictions my party had. She presented us with the original soy sauce and also the gluten free version that was in a red cup so the two types could easily be distinguished. The waitress prepared the special sauce consisting of soy sauce, spicy mustard and red chili paste. She said it would go nicely with soup, but unfortunately I had finished the soup prior to her preparing the sauce.

She handed us the new menu, which seemed to increase in variety, but not by much. Our waitress informed us that the noodles had been made crispier and there were actual orange peels in the Orange Peel Chicken. I was also pleasantly surprised to find out that all the sushi was made in house.

When asked for our drink orders, I decided to get the strawberry cucumber limeade, which was quite refreshing with nice sized pieces of strawberry and cucumber but was completely lacking the actual limeade.

For dinner, I had ordered the Gluten Free Mongolian Beef and Gluten Free Chang’s Spicy Chicken. The Mongolian Beef, an all time favorite of mine, was perfectly glazed with a sweet sauce and provides a little crunch on the outside leading to the chewy texture of the beef. It wasn’t served so warm which was disappointing and since it is extremely sweet, it tasted much better with the snow-white rice. The Spicy Chicken was more sweet than spicy which could disappoint many, but I was in favor of the sweet and mildly spicy glaze surrounding the golden nugget.

One member of my party was vegan and oil free. The waitress was willing to take a dish back when there was too much oil. She then told us that the chef would prepare a steamed vegan meal. Indeed it was vegan, but it was as if the vegetables had just been pulled out of the ground. You could tell just by looking at it that it was practically raw.

For dessert, I ordered the Gluten Free Flourless Chocolate Dome. The outside melted in my mouth as the rich and creamy milk chocolate slid through my teeth and down my throat. I added the sweet and sour berry sauce to the dome creating the perfect ending to our meal at the “new” P.F. Chang’s.