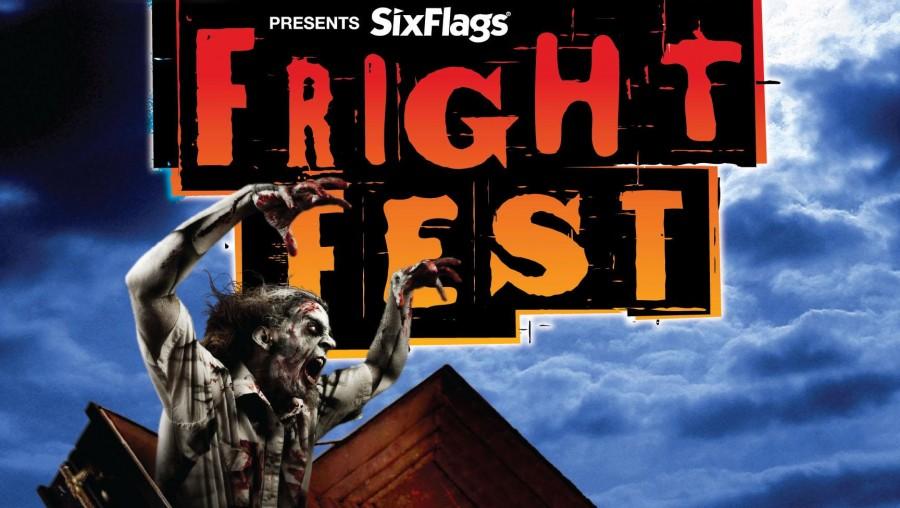 Fright Fest offers many park attractions for its visitors.

Imagine a scenario in which the halls of a haunted house appear empty, the walls are stained with the blood of the unfortunate and a dim light flickers overhead. A terrified man treads softly on the bloodstained carpet, visibly shaking. A gruesome creature leaps out from the shadows and advances toward the quivering victim who screams in terror. The door behind the screaming man leads outside where other park guests wait to experience scares of their own.

While many Halloween festivities have rides, pumpkins, candy, costumes and maybe a cornfield maze or two, Six Flags has the Fright Fest. Fright Fest is a Halloween celebration that begins in the middle of September to the beginning of November.

The Six Flags Corporation initiated Fright Fest after experimenting with Halloween-based events throughout the 1970s. In 1989, Six Flags officially implemented the first Fright Fest into one of its theme parks, Six Flags Over Texas. Soon after, Fright Fest began appearing through all of the Six Flags parks. Each individual theme park’s versions of Fright Fest incorporated the general ideas of haunted houses, a trick or treat trail for kids and shows.

Six Flag’s Fright Fest motto is Thrills by Day, Fright by Night. The phrase, Thrills by Day, refers to the family friendly activities during the day, which are available for people of all ages. Specifically, New Jersey’s own Six Flags Great Adventure features many family-friendly activities, ranging from dance parties, magic shows and other scheduled shows throughout the park. For instance, Six Flags Spooktacular Street Party is a street dance party on Main Street where popular Looney Toons characters and guests dance along to Halloween music.

Paw and DisOrder is another activity, which families can participate in. The interactive game of Who Did It? invites children of all ages to join Looney Tunes characters in searching for a stolen pink diamond hidden in Adventure Seaport. Moreover, Doc Snooker’s Halloween Time Machine is a comedy show found at Six Flags. Doc Snooker reincarnates popular Halloween characters in “Frontier Adventures”.

The Spooky Kooky Magic Show that is in Fantasy Forest is yet another one of the countless family-friendly magic shows provided at Six Flags. In addition, at the Lakefront, people can watch a Halloween themed sea lion show called Sea Lion Scary Tales. Another sea creature show includes You Otter Know, which features Six Flags Great Adventure’s asian, small-clawed otters and new sea lion pup, Kona. At the Trick-or-Treat Trail, located in the Fantasy Forest, children of all ages can trick-or-treat as well as meet featured Looney Toons characters.

The “Fright by Night” open after 6 p.m., officially ending the “family fun” through opening the scary haunted houses and scare zones throughout the park. For the majority of Six Flags’ haunted attractions, a Terror Trail Pass is required in order for guests to enter. Attractions include Asylum, The Haunted Heist, Total Darkness, Crop Circles, The Manor, Voodoo Island, Condemned and Wasteland. Two particularly new additions for the 2015 Fright Fest include Big Top Terror and Condemned.

Big Top Terror is an indoor black-light maze, which is located in the Boardwalk section where guests wear 3-D glasses to experience scares that seem unreal.

In a recent press release, Fright Fest’s special effects editor, Tony Mandile said, “Big Top Terror will be a coulro phobiac’s [one with a fear of clowns] worst nightmare.”

Located in Movietown, Condemned is a maze that looks like a maximum-security prison where prisoners run rampant and guests are attacked by crazed convicts.

Crop Circles, the new maze for the 2014 season, is located in Frontier Adventures. The Crop Circles is supposedly haunted by the ghost of a murdered deputy and plagued with aliens.

Asylum, located in Movietown, is an attraction that has evil doctors, nurses and demons roaming the halls. Another attraction includes the Haunted Heist, a version of a laser maze game that illustrates an archaeological expedition that ended with an avalanche of rocks, stationed in Adventure Alley. Additionally, Total Darkness, featured on the Boardwalk, is a pitch-black maze where guests must find their way out. Voodoo Island is in Frontier Adventures and it illustrates a reality TV show gone wrong, which is caused by revengeful locals. Wasteland features a chemically engineered forest containing mutated scientists and people while the Manor is a haunted house where the ghost of the home terrorizes victims.

Three fright zones include The Bloody Fountain, Bone Bucher Terror-Tory and Circus Psycho. Circus Psycho is a section at the midway of the Boardwalk where evil clowns roam and scare guests. At the Bloody Fountain, colonial zombies scare guests at the Liberty Fountain and on Main Street. Bone Butcher Terror-Tory is where Western zombies chase after unassuming park-goers in frontier Adventures.

Four Fright Entertainment shows at Six Flags Great Adventure include The Awakening, Professor Zombini’s Freak Show, Dead Man’s Party and Circus of Thrills. The Awakening is a parade of zombies and monsters that stretches from Movietown to Adventure Alley. Professor Zombini’s Freak Show has performers carry out gruesome feats to entertain guests. Dead Man’s Party is a dance that takes place in Movietown and the Circus of Thrills is a collection of circus acts that use various instruments such as the Globe of Death, the Wheel of Destiny and other thrills to predict people’s fates.

The final weekend of the Fright Fest begins now, so come out and enjoy the frightening, yet delightful festivities.