The first day of Spring with Ilana 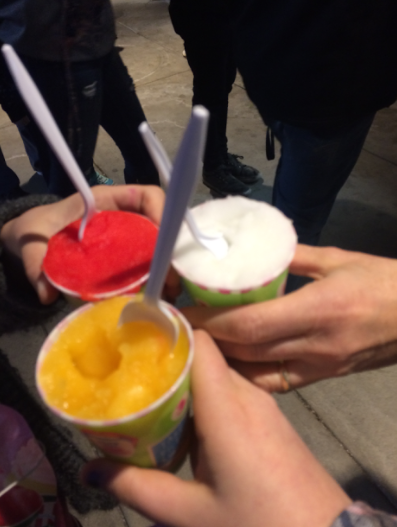 This morning’s Google Doodle was adorable. It featured a mouse emerging from their little underground den, complete with a fishbowl and a calendar, to drag a disproportionately large daisy back into their den and place it in a vase of water. Sure, it’s PARCC season, there’s still snow on the ground, and today’s temperature low came in under 30 degrees. But at least Google is excited about the first day of spring.

I didn’t exactly expect to wake up this morning with sunlight streaming through the windows and birds fluttering around my head a la Snow White, and sure enough, spring began for me the same way as any other day; with the standard 6 a.m. shamble. This consists of hitting snooze over and over for a ridiculous amount of time after my 5:45 a.m. wakeup call, then eventually scrounging up enough motivation to quickly put myself together and stick a toaster waffle in my bag on the way out the door. I was disappointed to note that the climate was apathetic to the official Spring label, and everyone at my bus stop persisted in keeping themselves bundled up in hoodies and winter coats.

The weather didn’t improve enough for me to have lunch or gym al fresco, and I began to despair, watching my dreams of a sudden escape from winter monotony start to slip away.  Was the first day of spring doomed to be just another Monday? However, there did remain to me one sweet ray of springtime hope  to make my seasonal transition feel official. For the first day of spring, Rita’s and Dairy Queen offer well-known promotional specials; a free small vanilla cone at Dairy Queen, and a free small water ice at Rita’s. The latter in particular is something of a local milestone, with cabin-feverish children and teens all over the area dragging their parents and friends to comp their free sweet and welcome the promise of future sunshine and months of future Rita’s runs. My own childhood is filled with memories of braving long lines at Rita’s, regardless of weather or hour, for my own share in this local custom. And this year would be no exception.

With my mother in tow – an overly willing chaperone fixated on the idea of lemon water ice despite the annoyance of having to drive me halfway across town – I set out for Ellisburg Circle under a gorgeous 7-o’clock sky, saturated with lavender, orange, and periwinkle streaks nearly as vibrant as the artificial flavoring that gives water ice its many iconic hues. The Rita’s line snaked unevenly around a couple of cinderblock columns, stretching three stores over and nearly outstripping the far side of the plaza. I took my place at the back around 7:15 – still in long sleeves, although most patrons were jacket-clad and seemed quite cozy. My mom jokingly noted the diverse demographic of the waiting patrons by proposing free water ice days as a national cultural unification campaign, but her words did hold some truth. I could hear several different languages being spoken in line, and patrons of all ages and genders – from parents holding their excited children close to preteens on bikes – were here for a common experience of fun and flavor.

A couple of Rita’s employees, high school seniors near the end of their six-hour shifts, walked up and down the length of the line as it inched forward offering coupons, the addition of a dollop of ice cream for only $1, and a sign-up sheet for Rita’s birthday rewards program. This must be where the value in giving away free water ice comes in – it’s a perfect merchandising opportunity. As I took my coupons, one cheerful senior explained to me that this one franchise alone had already gone through about 40 tubs of water ice that day, and the line had been this long – two or three stores over from Rita’s – since the start of her shift at 3 p.m. She estimated that 500-600 customers had come through the line thus far today. When I wondered aloud whether she was being paid double to deal with such a large crowd, she explained that double pay was only instituted on the holidays, but one could expect a dramatic increase in tips during the first-day-of-spring special.

I was surrounded by joyful noise, and enough chaos to slip an arriving friend into line beside me with no complaints, but the crowd remained pleasantly un-rowdy and the line moved surprisingly fast. As I admired my friend’s colorful ensemble, I found that twenty minutes of waiting had passed in the blink of an eye and it was our turn to cash in. After ordering a cup of mango at the counter, a tropical foil to my friend’s cherry and my mother’s lemon, I learned that mango was incidentally the most popular flavor of the day thus far.

My first taste of spring came at 7:35 p.m. Maybe it was just the sugar rush, but I was pleasantly surprised how much this fun local tradition had changed my state of mind from snowy and grey to flowery and bright.

After snapping a few pics, we ducked into the dollar store for a few minutes of perusing, encountering several other clusters of shoppers with fresh Rita’s cups in their hands. By the time we re-emerged, it was dark out but the RIta’s line was still going strong.

Even as we drove away, eager locals huddled together in formation, around cinderblock columns and nearly to the end of the plaza, yearning for their first bite of spring to usher in the new season once and for all.