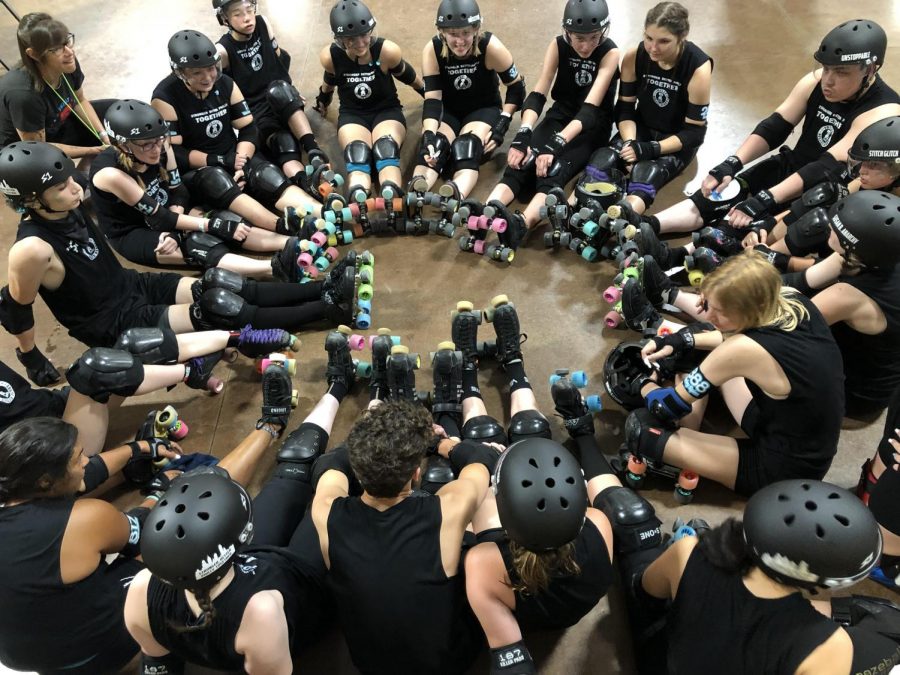 Philly's Roller Derby Team circles up before a match.

Chances are, if you asked your grandma what roller derby is, she might have watched it on a Saturday evening television program. Now, roller derby is resurfacing as a full-contact, competitive sport–without the frills and theatrics on the 1960s TV shows.

Roller derby is not just skating around the track. It is intense and fast-paced, with two teams competing against each other in groups of five for up to two-mi

nute rounds. There are offense and defense roles. One offense player, the jammer, distinguished by a star on their helmet, gains points each time they lap the opposing team’s members. The defense players are called blockers, who essentially must block the opposing team members so the jammer can’t score points. In the words of Devoida Mercy, a coach for the Philly Roller Derby Juniors, it is “the fastest two minutes on the track.”

Mastering skills are key to being solid in the game. At the Philly Roller Derby Junior program, while practices take place once a week, individual training is crucial to maintaining physical strength. Mercy believes it was this intensive training and practice that helped the teams improve their game significantly.

In 2017, the team was eligible for the Junior Roller Derby Association Championships, taking 6th place overall. Just a year later at the World Cup, they worked their way up to 2nd place. What was the secret? Practice and practice. Especially skating.

“I think the best endurance [training] for a skater is skating,” said Mercy.

Many of the roller derby players participate in other sports, and some of Mercy’s players also skate in rinks during the week. Aya, also known as “Aya The Storm”, a member of the Philly Roller Derby Juniors, practices at the skatepark weekly. Training can also be done at home, including footwork, running on the elliptical, or cycling.

As a team sport, strategy is key to roller derby. Technique and constant planning is vital to winning a game. Blockers play defense at the same time as playing offense. If the blockers are succeeding in preventing the opposing team’s jammer from scoring points, some of them can lend help to break up the opposing team’s blockers so their own jammer can skate past to win points.

You do not have to be a certain size or weight to be eligible, either. Whether you are a blocker or a jammer, different sizes prove advantageous.

“I’m a small person but I’m still useful…on the track, even against skaters who are much bigger than me,” said Alison Rogers, nicknamed “Sugar Cookies”.

“We just had an open house for skaters, and around 70 new people joined, which is really exciting,” said Mercy, “Some of them have no experience in skating, so we teach them the basics.”

With roller derby’s growing popularity, Mercy hopes that soon everyone will know about this sport.

“This game is radical,” Mercy said. Not only is it one of the only full-contact sports for women, it can also be played co-ed.

“I love how in roller derby all genders play by the same rules, share the same aggression levels and play all together on the same team,” said Quinn Shepler, also known as “Ruff Red”.

But, the sport is not the only reason keeping roller derby players coming back–it’s also about the community. The players accept and support each other for who they are and have a good time together. It’s a place where “nobody judges [anyone for their] unshaven armpits,” said Dru Shepler (nicknamed Motley Dru).

Roller derby is making a comeback, and the Philly Roller Derby Juniors are ready to play.