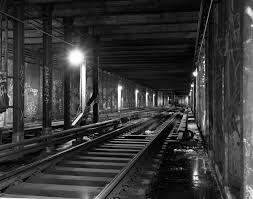 PATCO's Phantom Station may be returning.

A PATCO train races down the tracks, fresh off the Ben Franklin Bridge, barreling toward the 8th and Market stop. A look out the window would greet riders with the pitch darkness of a subway tunnel, except in one place. Underneath the intersection of 6th and Race streets, right on the edge of Philadelphia’s vibrant Franklin Square, lies the remnants of a station left virtually untouched for over 30 years: PATCO’s ‘phantom station.’

Named for the park under which it lies, Franklin Square Station predates the hi-speed line by over 60 years. The inaugural ride of PATCO was in 1969, Franklin Square opened in 1936. For the first seven years, the station was unused by PATCO, but the transit company reopened the station for the United States’ bicentennial in July 1976. From then on, Franklin Square joined 12 other stations: Lindenwold, Ashland, Haddonfield, Westmont, Collingswood, Ferry Avenue, Broadway, City Hall, 8th and Market, 9th/10th and Locust, 12th/13th and Locust, and 15th/16th and Locust. The station closed in 1979 due to low ridership and has been dormant ever since. Cherry Hill’s own Woodcrest Station opened in 1980, returning the line to 13 stations.

Though it now lies forgotten in the dark Philadelphia subway tunnels, the Delaware River Port Authority (DRPA) has expressed interest in reopening and renovating the stop.

“It’s clearly something that would help (commuters) on both sides of the river,” Meryl Levitz, a Philadelphia tourism official, told nj.com.

The station, located at 6th and Race, would serve Philadelphia’s Chinatown district, the Constitution Center, the Electric Factory, and, of course, Franklin Square. For East students, this would mean that by catching a train at Ashland Station in Voorhees—a mere four miles from East—all the above areas would be easily accessible, adding to the existing proximity of sites like Independence Hall and the Liberty Bell to 8th and Market Station.

Reopening the station, however, is a monumental commitment for the DRPA to undertake. It is estimated that the project will cost around 28.2 million dollars for an estimated 1500 riders a day. The ridership numbers are expected to grow as East Philadelphia continues to develop, but that is not a sure bet by far.

As the station is now, it is unsuitable for riders. Years’ worth of decay covers a pretty dilapidated station overall. Twenty-eight million dollars will fix that, but of PATCO’s budget allocations in 2017, only 510,000 dollars were put forth to begin work on renovations. The budget also predicted an allocation of 11.7 million dollars through 2019, leaving roughly 10 million for 2020 or later. Long story short: Franklin Square probably will not be up and running for a while. That said, a serious effort to repair Franklin Square Station could spark plans from the South Eastern Pennsylvania Transportation Authority (SEPTA) or the DRPA for new rail lines. One speculation of such a line is a connector from Franklin Square to the Market-Frankford SEPTA line’s Spring Garden Station, servicing Far-Eastern Philadelphia more thoroughly.

Speculation, while interesting, is pointless until the DRPA begins to put serious money where its mouth is, but if they do, it could change Philadelphia-South Jersey transit for the far-better.