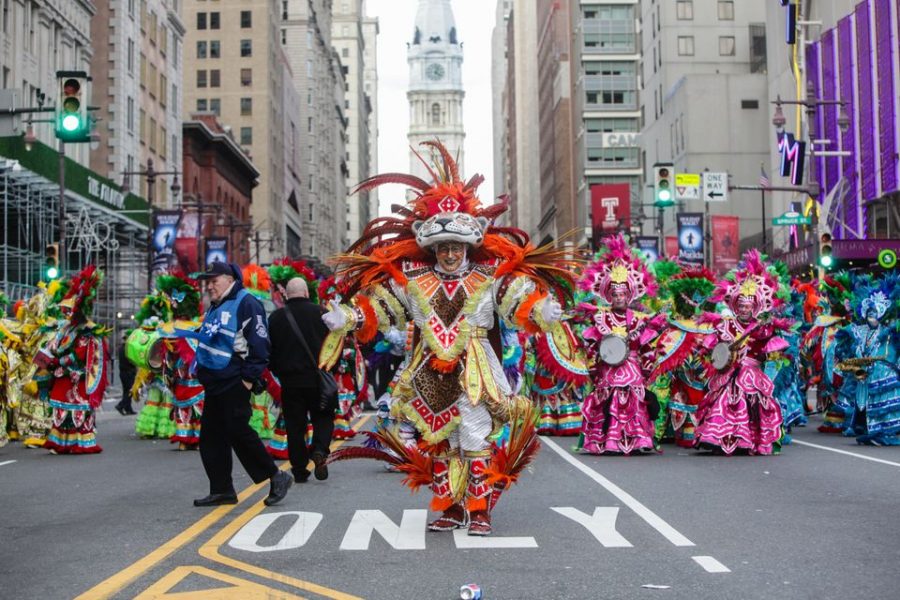 Dancers at the parade perform in the streets of Philadelphia.

The 2019 Mummers Parade was surely one to remember. With an amazing performance from from Quaker City String Band came a nice win!

They won overall first place with a score of 97.9. Second place was awarded to South Philadelphia string band (96.38). Finally, Woodland string band was awarded third place (95.95). The mummers parade features performers who prepare all year long for their skits. Especially in the string bands, music is used to convey their message or theme.

The first sponsored Mummers Parade was on New Year’s Day in 1901. The Mummers Parade has been going on for many years, dating back to the late seventeenth century to welcome the new year and honor the old. The Philadelphia Mummers Parade can be compared to New Orleans’ Mardi Gras.

The inspiration for the Mummers Parade came many years ago. It started as the first Philadelphia settlers visited friends on December 26. The tradition was then extended to New Years Day. The New Year was celebrated with masquerades and noisemakers. It was common for people to carry firearms, and soon it became tradition for them to go off along with the noisemakers. People who did this became known as the New Year’s Shooters. Later, this evolved into the Mummers Association. People went from house-to-house singing, dancing, and performing in exchange for food and drink.

This was the 119th Mummers Parade. With over 10,000 participants and hundreds of thousands of spectators, the Mummers Parade is a popular tradition for many, especially in Philadelphia. Today, the parade is divided into five groups: Fancies, Comics, Wenches, String Bands and Fancy Brigades.

The Fancy Brigade division takes place indoors at the convention center. This year, a  mentionable display was by the Magic Fancy Brigade. Their theme was “How Sweet it is”, and it was made to look like a candy factory. Another great display was by the Satin Slipper Club, with the theme of “ Clans of Scotland.” A comic group called The Lobster Club featured a tag-team of Donald Trump and Vladimir Putin attempting to lock away Uncle Sam, but are stopped by the Philadelphia Flyers mascot, Gritty. The South Philly String Band with the theme of “Brazilian To One” performed well, just like the Fralinger String Band with the theme of “Paradise.”

“These groups like many others made the competition very difficult to adjudicate [it],” said Scott Graser, 30-year Mummer and Rosa Middle School’s vocal teacher.

He belongs to this year’s winning group, Quaker City String Band. Their theme was “Last But Naut Last,” and most of their music was from movie soundtracks.

“The Nautical ideas were inspired by the movie Pirates of the Caribbean,” said Graser.

The parade kicked off at 9 a.m. The Bongard family, a family of mummers, showed their spirit wearing Eagles costumes.Their daughters are fifth generation mummers, and for many families it is tradition to start the year off with their loved ones in costume.

That tradition concluded this year for the Broomall string band. After almost 90 years of marching, they gave their final performance. Many groups were Eagles or Super Bowl Champion-themed to honor the Birds’ win last season.

With any tradition, things have changed for the better over the years. The performances themselves have become more complex, in addition to the stage and the props.

“When I started, we were only allowed to use handheld props. Now, we are allowed to use wheels and can build whatever we want as long as it is not over twelve feet high,” said Graser.

However, the biggest change this year has been the parade route itself. The parade used to march from Oregon Ave and be judged at City Hall, but now it begins marching at 16th and JFK to judging at City Hall. They continue on to parade down Broad Street to Washington Ave.

The Mummers Parade this year was definitely one for the books!