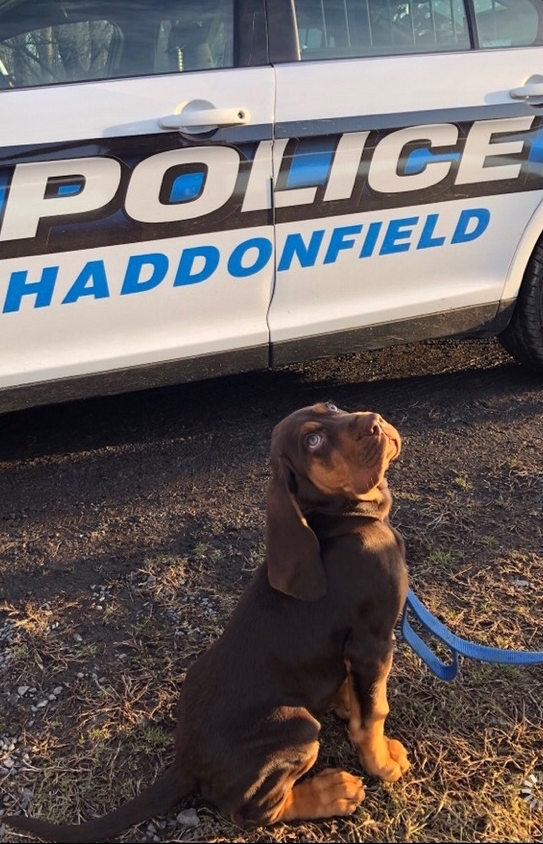 Courtesy of the Haddonfield Police Department

Meet Blue! This adorable pup is the newest member of the Haddonfield Police Department.

This adorable little guy has been chosen to fulfill the job of community policing, scent detection and trailing. After attending a preliminary academy in the spring and another academy in the fall, Blue will be able to trail the scents of suspects, missing persons and abducted children.

He will not, however, be working only within the borders of Haddonfield. If the police department gets a call from another area, Blue will be there to help.

Blue was picked out of a litter of 12 puppies in West Port, New York. Thanks to the New York State Police, the Haddonfield Police Department was able to find the perfect addition to their team. His breeder also has 38 other Bloodhounds in the United States; 9 of which are in California and 3 in New Jersey. She also has a dog in Africa who is there chasing poachers.

The total cost of Blue is not yet set in stone. Thanks to his breeder, the Haddonfield Police Department was given Blue with a discount since they are law enforcement. Blue has also been given vetcare pro bono; the only payment required is to pay for supplies. As for right now, the only real expense of having Blue is just to pay for his food.

Only a month following his arrival, Blue already has many supporters within the community. Haddonfield is a very dog-friendly town and the new addition has delighted many.

“Everybody believes in him… and what he’s going to do when he’s older – which is in about ten months,” said Lieutenant Stephen Camiscioli.

Already, he’s had multiple donations made to make his job safer, including a CPR mask and a GPS collar.

His caretaker is Officer Jacob Sorg. Upon Blue’s arrival, the two had an immediate connection and less than 24 hours later, the puppy was by Officer Sorg’s side at all times. All police officers, of course, are very responsible people. However, a K-9 officer must have a heightened sense of responsibility.

“When you’re a K-9 officer, you’re not done [at the end of the day],” Camiscioli said. “Your partner comes home with you.”

Officer Sorg is an excellent officer and is trusted by the rest of the police department with the important job of caring for Blue 24 hours a day.

So why choose a Bloodhound rather than the typical German Shepherd? Bloodhounds are much better at scent detection and trailing than German Shepherds. A Bloodhound’s scent detection is very unique and useful. Not only can a Bloodhound distinguish the difference between the scents of two different people, but they can also distinguish the difference between a person’s scent now versus, for example, an hour ago.

Another reason why a Bloodhound is a good fit for the Haddonfield Police Department is due to the fact that many people tend to feel a bit of discomfort around a dog as aggressive as a German Shepherd.

“They’re not like a German Shepherds where… you have to worry about where your hand is with them even if you’re not a suspect,” Camiscioli said. “[Bloodhounds] are very amicable dogs.”

In a town like Haddonfield, a sweetheart like Blue is just what is needed in law enforcement. He is dangerous, however not in the sense that most would assume. He can detect the location of any suspect, whether they want to be found or not.

Blue will be a great addition to the law enforcement of Haddonfield. He will be ready to safely detect suspects, bring people home to their families and more before we know it. We wish Blue the best of luck during his training as he begins learning the ropes of his new duties.