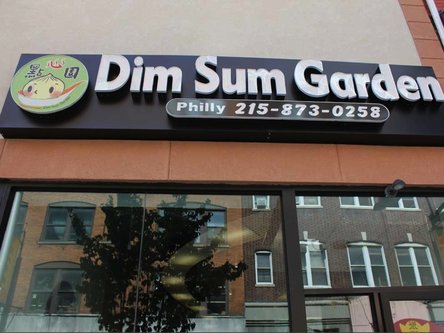 Located in the heart of Chinatown in Philadelphia, Dim Sum Garden manages to make customers feel not only welcomed but also immersed in Chinese culture and its traditions.

At first glance, the restaurant was slightly daunting. Squished between the dozens of other Chinese and Asian-fusion eateries on Race Street, the narrow dinner spot appeared small but actually continued back for several rooms. This was probably why the line of people down the side of the restaurant moved very quickly, so it wasn’t too much of a hassle.

Once my friends and I were seated at a table that we shared with three strangers (yes, it was a little weird), we received a very large menu. Though initially intimidating, the menu contained many pictures, making it easy enough for even a child to understand. After carefully examining the selection of well over a hundred dishes, I ordered the cheese wontons and steamed vegetable dumplings. Those were the first dumplings I had ever eaten!

The service was quick and efficient. It was clear that our waitress was stressed and busy, but ultimately we got our orders, so it was hard to complain.

I was not disappointed when it came to the food. The cheese wontons were great, and the sauce was a perfect pairing to the fried pocket. The vegetable dumplings were phenomenal! I would recommend using the dumpling sauce provided in the center of the table. I can’t stand soy sauce, so I was a little hesitant using a dark, thin sauce from a Chinese restaurant, but the dumpling sauce was great to add a little extra flavor to the dish itself, and it was also delicious on its own.

The pricing of the meal was more than reasonable. The cheese wontons were about four dollars, and the dumplings were about seven. They were a great portion and quality for such a cheap price. However, a huge inconvenience emerged when we learned at the end of the meal that we could only pay in cash. The restaurant did have an ATM at the front, but this was still annoying to deal with.

All in all, the atmosphere of the restaurant was a little hectic and cramped. However, I think that feeling contributed to the ambience of the place, rather than take away from it. I really felt immersed in the Chinese culture, and the only complaints I had were the awkwardness of sitting with another party of three and the fuss of having to pay in cash.

The food and environment were ultimately great and outweighed the negatives. I would rate this restaurant a 4.5 out of 5 stars.