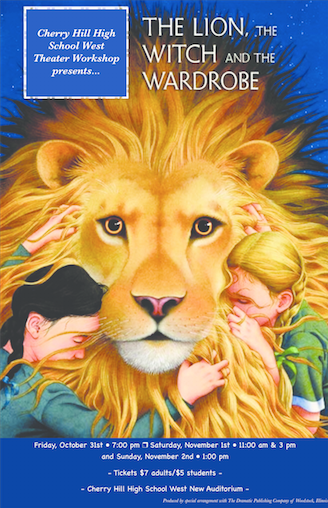 Cherry Hill West features The Lion, the Witch and the Wardrobe.

The closing matinee performance last Sunday drew in a healthy audience into the school’s most recently renovated auditorium. The audience mostly consisted of parents, grandparents and young, captivated children.

The story centers mainly on a family consisting of four Pevensie siblings: Peter, Susan, Edmund and Lucy. While spending some time in a mansion owned by a mysterious old professor out in the English countryside, the siblings stumble through a wardrobe that magically takes them to the land of Narnia. It is here that they must fight alonside mythical creatures such as unicorns, satyrs, centaurs and talking animals, as well as the majestic lion Aslan, to end the evil White Witch’s reign of evil with her hundred years of winter. If successful upon dethroning the White Witch, the Pevensies’ children will one day become the future kings and queens of this land.

The show, in many respects, was very cute and enchanting. It engaged the majority of the audience and captivated the little children in the audience, which is a challenge in itself. From beginning to end, The Lion, the Witch and the Wardrobe truly charmed viewers with its magic.

Part of that engagement with the audience, undoubtedly, went into the various, well-thought out details. From extravagant make-up and costume designs to a rather creative set, which encompassed merry-go-round “cubes” on both sides of the stage that were used to “point at” different locations throughout the play, the audience watched in awe. Furthermore, the fighting choreography and different tones of lighting helped capture emotion.

Additionally, the casting of the show allowed for a different approach of the story. Some members of the main cast flipped in terms of gender; characters like Aslan and Father Christmas, which Lewis created as distinct male parts were actually played by girls. And, to their credit, they did a rather good job at it. Their gender did not confuse or distract the audience from the storyline.

For any child, adolescent or adult, the show revived the little kid within. It was especially evident in seeing and hearing the reactions of the little kids in the audience who were immersed in the story.

The magic was still alive even after the production concluded. The magic of storytelling never leaves this world, but only grows throughout the years. With new generations of young children who always just wish to imagine, The Lion, the Witch and the Wardrobe allows anyone to believe in the unbelievable, the extraordinary and the magical.