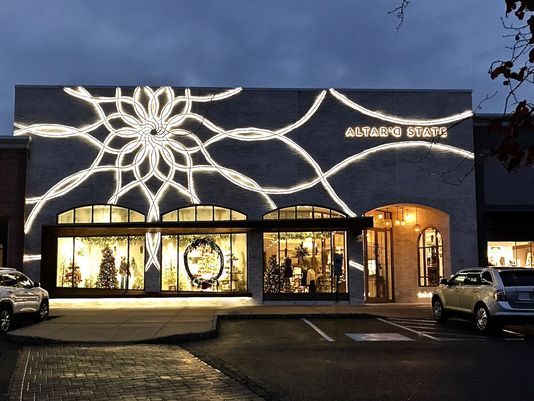 Fashion boutique Altar’d State believes in giving back to the community and inspiring people to “stand out–for good.”

In 2009, Altar’d State launched its business in Knoxville, Tennessee as a modern Christian retail store and coffee shop. While staying true to its conservative roots, the company has transformed into a mainstream fashion boutique that caters to people of all faiths. Last November, Altar’d State opened a new addition to its 80-plus boutiques throughout the nation–its first New Jersey store at The Promenade in Marlton.

Attention to detail is part of the Altar’d State marketing philosophy, which emphasizes eye-catching aesthetic designs to enhance the shopping experience. Before entering the Malrton store, shoppers are treated to dramatic and artful seasonal displays, which are showcased in three enormous picture windows. At night, a beautiful illuminated snowflake shines above the picture windows and guides customers into the store.

Alexia Nunez, a sales associate at Altar’d State in the Promenade, described the enormous effort that goes into putting together the elaborate window displays.

“We spent thousands of dollars on the window and we work overnights and long days to create this window, because we want the window to be the main reason why you walk in in the first place,” she said.

Lily Cohen (’20) is an East student who has shopped at Altar’d State numerous times. She said, “The displays in the windows are very intriguing and it just lures me into the store.”

Upon entering the store, shoppers are immersed into a bohemian garden setting which inspires them to browse at their leisure. Another novelty is the enthusiastic and helpful sales associates who greet customers and offer complimentary bottled water. Shoppers are encouraged to look around and try on clothes in the ornate dressing rooms that are reminiscent of a fairy tale.

Altar’d State offers something for practically every woman.The tidy store has a massive inventory that includes trendy clothing, shoes, jewelry, home decor and even gear for pets. Most clothing items in the store cost about $30 to $75 each, and various items are offered with buy one get one 50 percent off deals. Home decor items include wall art with inspirational messages intended to promote a positive self-image. Adorable plaques with positive and hopeful quotes such as “Let your smile and kind heart change the world” and “She believed she could, so she did” are sold for around $30.

Prices at Altar’d State are comparable to competitors, such as Anthropologie and Francesca’s. But what sets Altar’d State apart from a typical retail store is that it gives back to the community. Shoppers at Altar’d State help support the company’s mission to support those in need both near and far from home. Each Monday is a “Mission Monday” for the company where 10 percent of net proceeds are donated to local charities. This March, it selected animal shelters as the philanthropic cause. In April, Mission Mondays will benefit organizations supporting people affected by cancer. Additionally, the company gives to charities benefiting children in impoverished areas worldwide.

“Each store sponsors a child in Peru, and we give them clothing, food, water, [education] and whatever they need,” said Nunez.

If you love to shop and want to support a company that has a strong charitable mission, visit Altar’d State boutique at the Promenade.