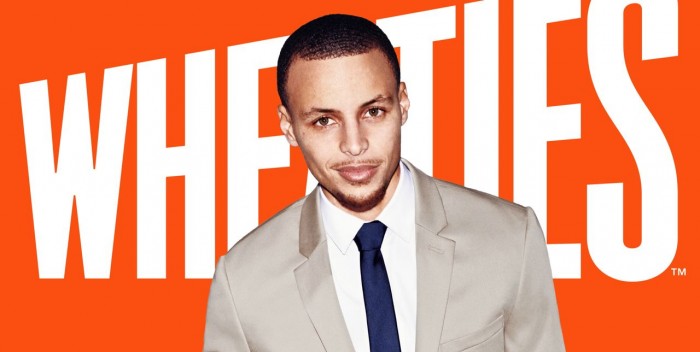 There are a few signs when one knows that he or she has made it: Being surrounded by paparazzi everywhere one goes, having one’s own Wikipedia entry, and driving a Ferrari every day.

However, none speak louder to athletes then getting a call from Wheaties asking them to stop by and snap some photos. For over 75 years, Wheaties cereal has featured a drove of deserving athletes on its boxes. Much like appearing on a famous magazine cover, those who have held a spot on the cover of “The Breakfast of Champions” are in a long lineage of legendary athletes. From Babe Ruth to Stephen Curry, only the greats hold this honor.

The first to grace the front cover of the box was Bob Richards, an US Olympic track/field star, in 1956. He remained the official Wheaties “spokesperson” until 1970.

Twelve years after the Washburn Crosby Company founded Wheaties in 1922, and were taken over by General Mills, the health/fitness driven cereal started displaying prominent athletes and sports teams on the sides and back of the boxes as spokespersons.

It was not until 1958, that they started having the athletes pose for the box cover, giving them prime coverage in the grocery store aisle. Richards held that role. Since Richards appeared on the front, Wheaties boxes have become a collector’s item, distinguishable from all other competition.
“In a way, [we] helped push the popularity of fitness, a term now synonymous with good health and well being,” according to the Wheaties Website.

The first true athlete to be depicted on the box itself was Lou Gehrig in 1934. The former first baseman for the New York Yankees made his appearance shortly after actor, Jack Armstrong, earlier that year.
Wheaties showcased Armstrong as the actor playing “Charles Flynn” of the radio adventure series the “All-American Boy.” Since then, their has been a considerable amount of non-athletes featured on boxes, however not primarily on a full-size Wheaties container. Additionally, many cartoon characters throughout the twentieth century landed a headshot on Wheaties’ mini cartoons, including icons such as Mickey Mouse in 1950.

In 1936, the first ever African American athlete took the spotlight. US Olympic sprinter, Jesse Owens not only appeared on the Wheaties cover in 1936, but also in 2003. Also, Ryan Dungey, professional Motocross champion was most recently printed on the cover in 2016.

Over the years, buyers began recognizing the cereal by knowing to look for a bright orange box, and some decided to start collecting them as memorabilia.  Wheaties box collector Larry Neely, 50, archives one of the largest and most eclectic Wheaties box collections in the U.S. and posts them on his Facebook page (Wheaties King) and website (WheatiesKing.com).

“I never heard of anyone else who collected [Wheaties boxes], so I figured I would start to collect them,” said Neely about his 1988 Los Angeles Lakers box.

With over 1,200 boxes– all of different sizes and variations– in his arsenal, he does not plan on stopping any time soon.

Not only does he posses distributed containers of the cereal, but he also owns “phantom” boxes as well. These “phantom” boxes are the championship team boxes that never make it to the shelves as the team displayed was defeated. Instead the winning team’s boxes get distributed. Nonetheless, these phantom boxes still remain of peak interest to collectors.

Neely said, “The first one [of his collection] was the 1987 Denver Broncos box. The Washington Redskins won the Super Bowl that year and some guy at a grocery store opened up a case of boxes to put on the shelves and poof, one Broncos box.”

Often times parts of the “Wheaties” logo got covered up by the box-front photo, intentionally, in order to give the brand a magazine-like style.

In addition to the cover photo, athletes often have small blurbs written about them, or their career statistics, displayed on the side or back of the box. Most collectors are drawn to the more rare and famous editions. The 1934 box cover with former professional tennis player, Ellsworth Vines, a 1964 box with former baseball player, Tom Tresh and a 1976 box former ice hockey player, Serge Savard, are among the most scarce. Not only are they rare, but they also now have a resale price range of anywhere from 90 to 250 dollars. Among Neely’s band of friendly collectors, there is not any sparring over who has the biggest collection.

“We don’t mind helping each other out because there is no competition,” Neely continues, “Because we’re all just kind of chasing the same thing.”

Most collectors, Neely says, actually form partnerships in order to round up the most boxes.
Although not worth as much as the rare containers, the total 18 boxes showcasing basketball legend, Michael Jordan are among the most famous and sought after by collectors and fans. Jordan currently holds the record for most appearances on the cover of Wheaties and is a big front-runner as he is the only one in the double digits.

Wheaties sees it is only right for Jordan to have this exclusivity as the company wrote on its website, “On many publications’ lists, he has been named best athlete of the century.”

In 2012, as a tribute to Jordan’s legacy with Wheaties cereal boxes, an aftermarket shoemaker, Emanuel Golden, customized a pair of shoes from the basketball player’s sneaker line, “Air Jordan.”
“I made them in the midst of making an ‘Air Jordan Endorsement’ pack of 3 shoes. Each shoe was to represent one of Michael Jordan’s biggest endorsement deals outside of Nike/Jordan Brand. There was supposed to be a Coca Cola shoe, a Gatorade shoe, and a Wheaties shoe,” Golden said. “I always strive to do something different that I couldn’t imagine someone else doing, so I decided to do the Wheaties shoe first since it felt like a fresh concept.”

Not only did the creator use the Wheaties logo colors, but he also included actual Wheaties cereal in a side pouch of the shoe. Further, he also put a paint mixture, to resemble cereal milk, in the tongue of the shoes.

On the project as a whole Golden explains, “All the work that went into [the sneakers] was worth it due to all of the reactions they received.”

Caitlyn Jenner made the cover twice in the 1970s and reappeared once more in 2012. When she openly came out as transgender in 2015, Jenner’s fans pulled for a new edition of the 1970’s Wheaties box to be made, in order to appropriately match Jenner’s gender identity. Looking for a courage themed box, fans still strongly await for the cereal company to have her featured once more.

The array of sports chosen by Wheaties has gone through a plethora of changes. Want to know when a certain sport was popular? —Just check which sports Wheaties covered the most during certain years.
It was baseball’s glory days from the early ‘30s to the late ‘50s. From there, it was a mixture of Olympic athletics, football and basketball.

The Minnesota Twins was the first team to grace the cover of Wheaties as they celebrated their 1987 World Series win over the St. Louis Cardinals.

When the Pittsburgh Penguins defeated the Minnesota North Stars to win the Stanley Cup in 1991, hockey got its shot. The Penguins portrait on the box, clutching the trophy mid-rink was distributed not too long after the title.

Since then many more teams have received the “Champions” box, after winning the “big one” of their respected sport.

Wheaties selects who it believes exhibits the qualities of a champion. The brand also recognizes the raw meaning of the word, ‘champion,’ is evolving.

“A champion is no longer a megastar athlete; it is also any person who looks inside and challenges their personal best,” according to Wheaties, “and that’s the ethos of the current incarnation of Wheaties.”
Wheaties has grown especially, as time does, in which sports it chooses to feature athletes from.
Wheaties has given the cover photo to boomerang throwers, hire wire performers, power walkers, coaches, wheelchair road racers and white water canoe slalom racers.

Wheaties even included 9-year-old female football star, Samantha Gordon on the packaging. She is the first, and currently the only, female football player to be on the box.
Not being ultra-famous celebrities, these few miscellaneous sports athletes still served the purpose that Wheaties set out to inspire.

What it meant to grace the cover changed when Wheaties realized their goal was to teach children, who consumed the General Mills’ cereal everyday, to always strive for the best.

“The coveted role was now about being a national role model,” Wheaties wrote on its website.
It became more of a spokesperson’s job, not just a legend athlete who shows up to take pictures and leaves. The select individuals on the box campaigns and joins “Team Wheaties,” a title received when one has made the cover.

Founded in 1958, the “Wheaties Sports Federation” would keep these athletes together, spreading ideas of healthy living with physical activity amongst the children of America.
Wheaties wrote, “[the] organization had close ties to several national sports groups that raised awareness around physical fitness and an active lifestyle.”

Earning the tagline, “The Breakfast of Champions,” means Wheaties’ job of picking who makes it on their cover is as hard as ever because the ever changing definition of champion.

Although the brand has made several changes over its several years of business, it still manages to keep up an unchanged relationship with its roots. This is much due to the fact that since the accidental spill of wheat gruel onto a hot stove by a health clinician in 1921, the formula for the cereal has virtually stayed untouched.

As long as Wheaties adapts to the meaning of “champion,” it plans to inspire children and adults based on whom it chooses next to grace the cover.