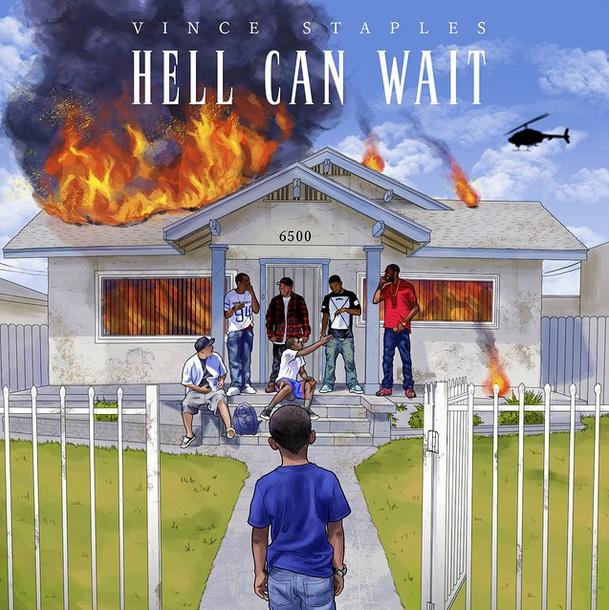 Vince Staples released his first commercial EP, Hell Can Wait, on Oct. 14. The release from the west coast rapper was probably most anticipated by those who follow the Odd Future Wolf Gang clan, as it was under this group that fame trickled down to him. He has a number of mixtapes under his belt, though he is arguably better known for his many featured verses on songs by Earl Sweatshirt, Mac Miller, Common and more. Vince has a full commercial album deal that is to come out in the future. This EP was most likely made to give the public a taste of what is yet to come.

Staples has a laid-back flow that many relate to a young Snoop Dogg, which makes sense, since they are both from Long Beach, California, but there are times when Staples could put more effort into what he is saying. The opening track, “Fire,” contains a heavy beat with drums that are loud and obnoxious, but Staples cuts through them quite well without having to raise his voice louder than the beat. He depicts the life of a ghetto kid who is forced into the life of crime at a young age. He describes scenes of him stealing Air Jordan Bred 11’s from his friends and gets in fights because, in his perspective, “I’m probably [going to] go to hell anyway.” This parallels with the album cover that shows a young kid coming home to presumable thugs and a house that is symbolically on fire.

The next song, “65 Hunnid,” serves as a continuation to the story of Staple’s life from the first track. In the first track he is a little kid being influenced by his surroundings; in this song, he is older and committing the crimes himself. Staples speaks about gangs becoming his new family and the loneliness he felt while being forced into violence and risky business. The name “65 Hunnid” could refer to being “hot,” as a slang word for violent or illegal. The song is represented on the album cover by the address of the house “6500,” which is flaming on fire.

The song “Hands Up” has an interesting chorus which cleverly uses double-entendre to tell his audience to raise its hands in excitement and also depicts a scene of a cop telling a citizen to put his hands up. The next song, “Blue Suede” contains a trapped-style beat as well as a bass that kicks in and makes listeners vibe to the track automatically.

The motif of a young thug struggling to escape the violent life he lives encompasses the entire tape, from scenes of Staples turning enemies into Spaghetti-Os to somber lines about the possibility of outliving the roses that could be placed on his grave. All in all, the Hell Can Wait EP served as another great project by Vince Staples and an enjoyable listen for all hip-hop fans.