Vivian Girls are an indie rock band from Brooklyn, New York circa 2007. Their first album Vivian Girls was released back in 2008, followed by Everything Goes Wrong in 2009. Their upcoming album, Share The Joy was released on April 12. The album contains ten songs which run for approximately 35 minutes in total.

If their name hasn’t given this away, Vivian Girls is an all-girl band, but these girls know how to rock n roll with indie garage rock reputation. Share The 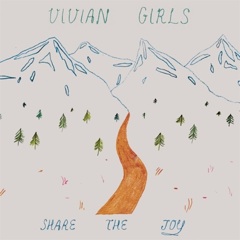 Joy features a smooth bass from Katy Goodman and steady drum beats by Fiona Campbell. Another noteworthy sound is the stellar guitar solos played by lead singer, Cassie Ramone. The presence of piano also adds another level to some tracks.

Immediately from the first three tracks, this album will certainly make you “Dance (If You Wanna)” as the track title suggests. All three of the girls harmonize in a hypnotizing fashion and the noise becomes psychedelic with the addition of the organ. The album literally takes listeners back to the old days of 1960’s pop, which can be heard in “Take It As It Comes”. In other songs like “The Other Girls” and “I Heard You Say”, the guitar even sounds similar to prominent music from the ‘80s and ‘90s, such as that of the Pixies.

It’s a blast from the past, but Vivian Girls do it in their own way. Every song is different with individual styles of building up, reaching the climax, and then falling back to a resolution. Hands down, the best song is “Take It As It Comes,” a cutetune about following your head rather than your heart when chasing boys: “You’ll never get a guy if your heart always tells you what to do/You gotta think with your head girl/Not with your heart/If you ever want a love so true/Oh girl take my advice/Take it as it comes.” The power in Ramone’s voice is fully released and it’s a pleasant balance between her voice and the instruments. The passion with which she sings makes these simple words sound very sincere, and the hilariously cheesy spoken word verses add a level of jubilant comic relief.

Vivian Girls’ sound is very consistent from their first album, which should comfort current fans. However, in no way does this mean that their musical sound fails to grow. The lyrics are simple, but enjoyable. For example in “Dance (If You Wanna)” one of the lines is “No, I don’t want to see you cry/Don’t want to hear you say goodbye.”  However, the song “Sixteen Ways” is very different from that poppy tune: “They ain’t coming back/It’s too late/I haven’t slept in 14 days/And now it’s time to barricade/Myself and these four walls/ My sixteen kids, they all have gone.” Lyrically, Share The Joy is a mixture of the simple and the complicated and exotic. Since their first self-titled album, it is apparent that the band has matured and this album serves as a testament to their personal and musical growth.

Share The Joy is a solid album that is easy to get into. It’s upbeat, even though most of the songs are about things that would bring the typical person down, like saying goodbye to a lover and begging him or her not to leave. This may be a girl band, but there’s more to them than that. Amidst their girl-group image of light harmonies light harmonies lies some hardcore garage music. Some of the topics in their songs are typical girly issues, but these aren’t necessarily girly girls.

Vivian Girls create a mood of pure euphoria on Share The Joy.