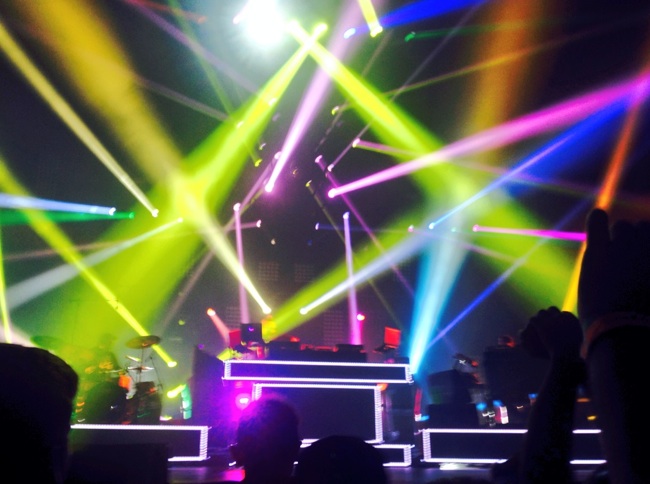 Photo by Emily Mosgowsky (’16)/ For Eastside.

Pretty Lights on stage at the November 1st performance at Susquehana Bank Center in Camden, NJ.

Derek Vincent Smith, also know as “Pretty Lights”, was born November 25, 1981 in Fort Collins, Colorado. Smith wrote and produced hip-hop music throughout high school and into college, where he studied at the University of Colorado. Smith dropped out during his freshman year to focus on his music. Smith began his career by playing late night shows for big acts in 2007 and 2008. In the summer of 2009, he played at several major American music festivals, and in the following autumn, Smith went on a multi-city tour of the United States. In 2010, Smith’s career elevated to the next level, when he played at Coachella, Ultra Music Festival, and Electric Zoo.

In early 2011, Smith made one of the biggest steps in his career, which would change his performances and reputation completely. He introduced his techie light-show, which was made to look like a cityscape by using rainbow LED towers. On January 25, 2011, Smith released two albums on his recently created record label, Pretty Lights Music. The record label offers free downloads of all Pretty Lights albums, plus releases from PLM artists including Michal Menert, Break Science, Gramatik, Paul Basic, Eliot Lipp, and SuperVision. Pretty Lights persists in distributing music for free, and often makes appearances at music festivals around the world.

On July 2, 2013, Pretty Lights released a new full-length album called “A Color Map of the Sun”. It is the first Pretty Lights album that does not rely on borrowed samples; Smith instead composed and recorded tracks with session musicians in studios in Brooklyn, New Orleans and Denver and pressed the recordings to vinyl, samples of which were then combined with modular synths and digital production methods. Smith’s music relies heavily on digital sampling and crosses many genres, forming a combination of glitchy hip-hop beats, buzzing synth lines, and vintage funk and soul samples. Pretty Lights’s sound is generated by synthesizing samples and organic beats using the Novation X-Station, monome and the Akai MPD32. Smith uses these digital controllers to program the music production software Ableton Live 8. When performing live, he uses two Macbook Pros running Ableton Live 8 and two Akai MPD32s. Smith considers his music as Electro Hip-Hop Soul, a mix between elements of electronic based music, and beats from hip-hop and soul music.

For his 2013 fall tour which is on the road now, Smith uses a live band to compliment his performance. There is a trombone player, two keyboardists, a drummer, and Smith himself as the DJ.

“The trombone was a great complementing factor to his act,” said Benji Grossman (’16), who attended the Pretty Lights concert at Susquehanna Bank Center in Camden on November 1st.

He wants to mix new production with the live band’s gritty old school hip-hop soul break styles in a way that production and a live band have never been heard together before. The musicians that have come together for this display of Pretty Lights are brilliant and so insanely talented. His career has grown from computers and live production to a full analog sound sculpting, band dubbing, bass playing, looping, synth and sample playing modular command center. Red Rocks in Colorado in August was the first live band show they did and they’ve been rehearsing ever since.

Smith’s new albums’ titles are a reference to a 1670’s era essay by Isaac Newton describing the experiments that led to his discovery of visible light’s color spectrum. “What Newton evoked I found especially poetic and beautiful,” Smith explains. “It fit what the name ‘Pretty Lights’ is supposed to embody–the idea of an artistic eye always looking at the world, searching for beauty and new inspiration.”