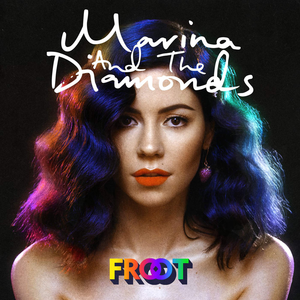 Originally supposed to hit the shelves on April 6, Froot, Marina and the Diamonds’ highly anticipated third studio album, was released nearly a month early on March 16 due to an internet leak. Although the full-length audio of Froot was spilled, Marina Diamandis and her newest electro-pop record managed to top the charts in the United Kingdom as well as receive number two on the United States Billboard chart within the first day of being out.

On Diamandis’s new album, the first five tracks tell a story about her life and a rough relationship with a person she loves. In the first track, “Happy,” Diamandis explains how she overcame major depressive disorder and “found a life worth living for someone else,” which indicates that she found a new relationship that is worth keeping. On the next track, “Froot” she tells that she is living the sweet life, or “la dolce vita,” with this new person. Tragically, “I’m A Ruin” expresses Diamandis’s unhappy feelings because she feels like her relationship with this new person is starting to fall apart, while later on in “Blue,” Diamandis ends the relationship, regrets it and can no longer get it out of her mind. Finally, in the fifth track, “Forget,” Diamandis forgets the past with her old relationship and moves on in life.

Froot definitely has a calmer vibe than Marina and the Diamonds’ previous efforts, The Family Jewels and Electra Heart. However, there are still many songs that sound very poppy and bubbly. “I’m A Ruin” and “Froot,” two of the singles off of Froot, are also two extremely upbeat songs. The chorus and tempo of both songs are faster than the rest of the songs on the album. These tracks have energetic, harmonious vocals which makes them an overall pleasure to listen to.

In an interview with TIME, Marina Diamandis said that she finds society extremely interesting, so she wrote about society and its flaws in the eleventh track “Savages.” In the first verse of this song, Diamandis sings about how murder and war live forever in society, as well as other hard-hitting topics. “Another day, another tale of rape,” Diamandis sings in the second verse of “Savages” while she tries to hide the depressed, dark lyrics in pop-sounds and strong drum beats.

Marina and the Diamonds’ third album, Froot, is a fun-filled, electro-pop hit that is an overall enjoyable effort from the singer. Even though it does not sound as poppy and sanguine as The Family Jewels and Electra Heart, a lot of the songs are nevertheless still danceable and relaxing to hear. Froot is expected to hit over 40,000 copies sold in the United States alone by the end of March, and Marina and the Diamonds is more than likely going to be receiving more and more listeners due to her beloved new release.