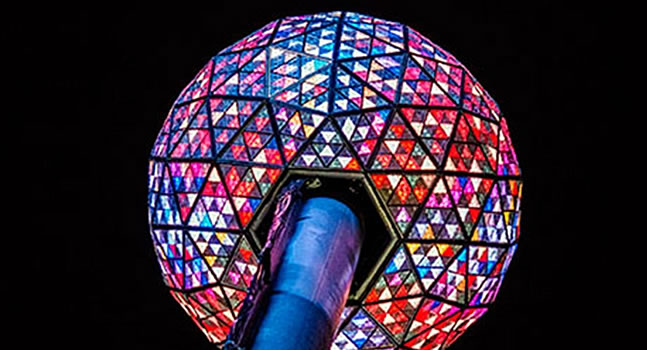 In the United States, many of us recognize the iconic tradition of dropping a giant ball in Times Square, New York City, to ring in the New Year. Millions of people from around the world watch this famous event take place. With this much popularity, many towns and cities in America have created public “New Year’s Drops” of their own, which imitate the one in Times Square. But of course, not everyone has a 700-lb ball decorated with hundreds of lights. Many have used other objects of significance to ring in the New Year, all of which, are tailored specifically to their own towns.

Seaside Heights, New Jersey
Snooki from MTV’s reality series Jersey Shore (which is set in Seaside Heights) was lowered inside a ball in 2011 for the network’s New Year’s Eve special.

A 100-pound yellow illuminated Peep made out of fiberglass is dropped. (The producer of Peeps, Just Born, is based in Bethlehem)

Dillsburg, Pennsylvania
Two pickles are dropped, the “Lil’ Dill” at 7:00 p.m. ET (midnight in Ireland, in celebration of Dillsburg’s Irish founders), and “Mr. Pickle” at midnight.

Lebanon, Pennsylvania:
A 100-pound stick of Lebanon Bologna is dropped. The bologna itself is distributed to a local food bank and animal shelter following the drop.

Frederick, Maryland
A Giant Key is dropped in honor of Francis Scott Key, who originated from that town

Brasstown, North Carolina
A plexiglas pyramid containing a living possum is lowered from the roof of Clay Logan’s convenience store. The possum is turned loose at the end of the celebration. Despite these measures, the event has been met with criticism from animal rights activists, particularly PETA, who has a history of objections to the event.

Raleigh, North Carolina
A 900-pound copper-and-steel acorn, designed by sculptor David Benson to celebrate the city’s bicentennial and nickname, “The City of Oaks”, is lowered by a crane.

Miami, Florida
A 35ft neon sign of an orange with sunglasses, dubbed Mr. Neon, is dropped.

Sarasota, Florida
A glowing or illuminated pineapple is dropped

Cincinnati, Ohio
A flying pig is “flown”, not dropped, confirming there is at least one occasion “when pigs fly”

Detroit, Michigan
A sculpture known as the “D Burst” (which is adorned with a giant letter “D”) is lowered from the Hard Rock Cafe at Campus Martius Park.

Wetumpka, Alabama
A meteorite is dropped at the Old Courthouse in honor of the meteorite that hit the River City.

Nashville, Tennessee
An 80-foot Guitar Drop took place at Nashville’s Hard Rock Cafe during Music City’s Bash On Broadway. In 2011 the partnership ended with Hard Rock Cafe and the guitar was exchanged for a 15-foot-tall music note. Although a Mike drop would have been a bit more appropriate, not to mention funny.

Plymouth, Wisconsin
Plymouth drops an 80-pound decorated cheese wedge, the newest Wisconsin cheese, from a 100 ft. ladder truck in a tribute to the region’s dairy industry and dairy products.

Houston, Texas
A star representing the Lone Star State is raised at midnight.

Show Low, Arizona
A deuce of clubs (2♣) is dropped. The card, which is the namesake of the main road through Show Low, is, according to legend the origin of the town’s name (the town’s founders allegedly derived the name “show low” from a game of poker where the winner showed a 2♣, the lowest card in the deck).

Boise, Idaho
A giant foam potato has been dropped from the Idaho State Capitol building.The 2017 potato was illuminated from within and dubbed the “Glowtato”