BROOMS UP: A group of students at Middlebury College turn Quidditch (from the Harry Potter series) into a real sport 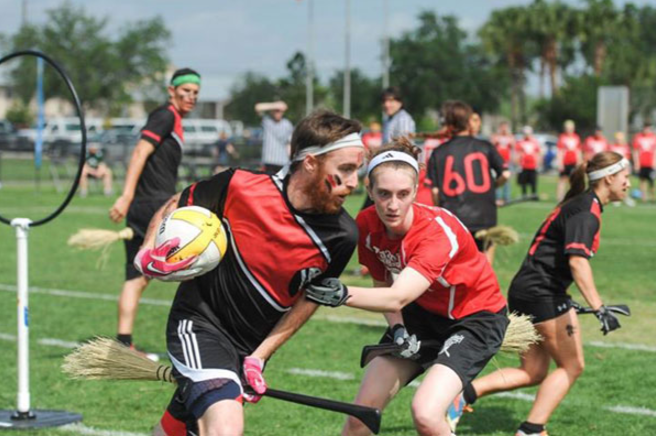 Various colleges now offer quidditch as a sport for students.

You have tried baseball, basketball and soccer. You have struggled through long, frustrating seasons of football, tennis and track. After years of unsuccessful athletic activity, you may decide it’s time to give up. But have you considered Quidditch?

Many people know Quidditch as the sport with flying broomsticks and giant golden scoring hoops from the magical world of J.K. Rowling’s Harry Potter. However, not as many know that people from all over the world participate in “Muggle” Quidditch matches.

“Muggle” Quidditch was invented at Middlebury College in Vermont by a few students who mashed together the rules of basketball, dodgeball, hockey and rugby. The result was a game similar to Quidditch that “muggles,” non-wizarding people, could participate in without using flying broomsticks.

The match is played on a grass field that is generally 84 yards long and 48 yards wide. Three hoops of varying heights are mounted at either end of the field, spanning from six to nine feet tall. Around each set of hoops is a keeper zone and a penalty box.

The magical equipment used in Wizard Quidditch is replaced by everyday objects. The Quaffle, which is used to score points by throwing it through one of the golden hoops, is a volleyball. The two Bludgers, which are used to hit and distract your opponents, are dodgeballs. Finally, the wondrous Golden Snitch is replaced by an ordinary tennis ball. All players must carry a broom in between their legs during the entire game and cannot touch their opponents with it. Soft padded helmets are allowed, but football helmets and hard padding is not permitted.

The positions in Muggle Quidditch are the same as the positions in Wizard Quidditch. The three chasers are known for their endurance. They run around the pitch and pass the Quaffle back and forth until they are able to shoot it at one of the golden hoops. The two beaters are characterized by their aggressiveness and accuracy. These players must quickly hit their opponents with a Bludger to either make them lose possession of the Quaffle, or weaken their defense. The keeper’s job is to guard the golden hoops and help his team by calling out directions. The seeker spends the match chasing the Golden Snitch, which is a person dressed in yellow with a tennis ball tied to the back of their ankle. The Snitch enters the game at the 18 minute mark, and the game ends when the Snitch is caught. To catch the Snitch, the seeker must grab the tennis ball off of the impartial volunteer’s ankle.

Points are scored either by throwing the Quaffle through the golden hoops (10 points) or by catching the Snitch (30 points). The team with the most points wins.

Muggle Quidditch has spread from Middlebury College to other colleges around the country. Enough schools now have teams, so a college league was created. Soon after, the US Quidditch league was formed, and national competitions now occur. There are Quidditch teams from Villanova, Pennsylvania to Los Angeles, California. The teams compete in a national league, as well as a national Quidditch Cup, where the top 60 teams in the country compete.

Quidditch is a sport of endurance, aggressiveness and heart. Even if you’ve never cracked the spine of a Harry Potter book, it may be worthwhile to check this sport out.