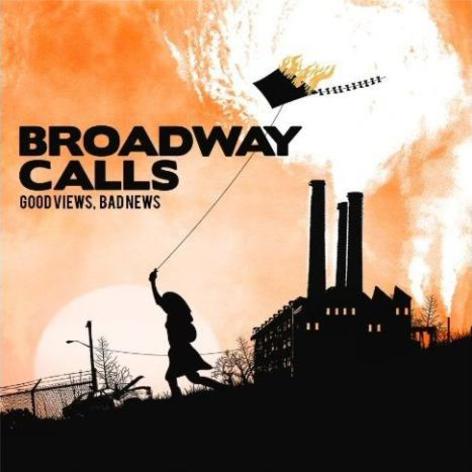 Broadway Calls is a punk rock band formed in Rainier, Oregon. The band has created a three-album discography since the its inception in 2005. The band originally consisted of Ty Vaughn on guitar and vocals, Matt Keonig on bass and vocals, Robert Baird on guitar and Josh Baird on drums. The band released its second album Good Views, Bad News in 2009, after releasing the single “Be All That You Can’t Be.” Growing up in a competitive environment, the band earned recognition early on in its career by deciding to tour with Daggermouth, a Canadian pop punk band.

The Baird brothers and Vaughn grew up with each other in Rainier and had previously formed a band called Countdown to Life that was signed to New Age Records; however, they took a short break before revamping their musical abilities and hiring Koenig, who now goes by the name Broadway Calls. Deciding to tour early on earned the band quick recognition, and the band released its debut EP, Call the Medic in 2005. After signing with State of Mind Records and releasing a debut self-titled album, the band signed with Adeline Records in 2007 and released Good Views, Bad News, an aggressive rock album filled with short songs that are sure to take out the anger in listeners.

The album’s first track, “Midnight Hour” begins with a solid guitar part and heavy drums, but will make listeners want to bang their heads and feel energized. The lyrics are relatable about a shy man struggling to fit in, as shown with lyrics such as, “There’s been a mistake. It’s written all on my face. / I showed up tonight, and I cleared out the place. / I just wanna feel at home.”

“Basement Royalty,” the album’s fourth track, begins similarly to the other tracks, with loud and angry guitar and Vaughn’s shouting vocals. However, the chorus is somewhat catchy and the lyrics are clear to hear. Vaughn recalls the band’s struggles to write songs and how much he needs inspiration when he chants, “I’m dragging my pen in a line on the page / Snow covered rooftops, and broken down stages are filling my head… Closing my eyes and dragging my feet / I’m praying for rainstorms and earthquakes nightly.”

Good Views, Bad News is certainly not relaxing, but there is something captivating about its energy and interesting lyrics. The album is definitely recommended for boosting energy after an exhausting day or simply rocking out on a summer night.