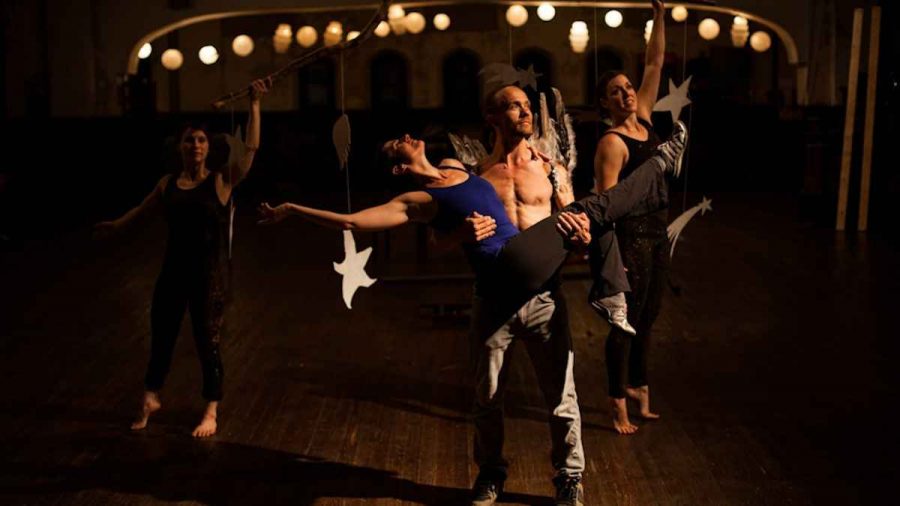 Artists gather to put on a scene from “Cultivate.”

Artists from all of Philadelphia gather for the annual Fringe Festival

Last Friday, September 9, marked the kickoff of the 2016 Fringe Festival in Philadelphia. FringeArts is an umbrella organization that brings progressive and imaginative shows of all sorts to Philadelphia all year round. The organization has a theater located at the FringeArts Center on the Delaware River Waterfront.  Each year, the FringeArts hosts the Fringe Festival, which lasts until September 24 and is a celebration of independent artists in the city. There are over 1,000 different shows and performances, ranging from plays to puppetry to aerial dancing which are shown in local theaters that are participating in the festival. Most of the shows are relatively cheap to attend – ranging from about ten to twenty dollars.

I attended three shows during the festival this weekend, two plays – “Drowning Ophelia: A Metaphor for Female Pain” and “They’ll Be Callin’ Us Witches” – and one aerial dancing performance – “Grounded Autonomy”

“Drowning Ophelia: A Metaphor for Female Pain” was the first show that I saw. The show was put on at a place called the Iron Factory in North Philadelphia. The Iron Factory is a rowhome, and the show was on the third floor. It was nearly one hundred degrees inside with no air conditioning. The stage was small and square, two sides of it had seats. There were only three rows and about twenty people there. The show is about a woman named Jane and her dealing with the character Ophelia from Hamlet living in her bathtub. The reason why Ophelia is living in the bathtub is slowly unfolded throughout the 75 minute play – Ophelia is a coping mechanism for Jane’s depression and anxiety which she has from being raped by her brother as a child. This play was beautiful and moving. Victoria Rae Sook, who played Jane, was intense and was able to portray such a tragic character so believably. Ten percent of ticket sales went to the suicide prevention organization IMAlive, an online crisis network. The last show was September 13.

The next show that I saw was “They’ll be Callin’ Us Witches,” at the Arden Theatre, a black-box theatre in the Old City. This play, based very loosely on Arthur Miller’s “The Crucible,” tells the story of the women of Salem – Abby, Mercy, Lizzie, Tituba, and Mary – as they pledge their souls to the Devil and promise to help Salem burn. This play was very abstract. All of the actresses were recent graduates from New York University Tisch School of the Arts. If one had no knowledge of the Salem Witch Trials or “The Crucible,” the play may have made little sense. However, having learned about both extensively in school, the play made some sense. It was not very plot driven and some of the things that happened in the play occured without reason or explanation. In the playbill, the show is described as empowering for women – I personally did not feel empowered. I left the show feeling rather confused. The last show is September 15.

The final show I saw was called “Grounded Autonomy,” which described itself on its playbill as “An aerial expedition! The unexplainable pull of another person and redefining what that means.” It was located at the The Glass Factory, which is basically a renovated warehouse, in North Philadelphia. If you have never been to any sort of aerial dancing or acrobatic show, I recommend you go to one immediately, especially this one. Aerial dancing is a type of dance that uses objects like ropes, swings, and poles that hang from the ceiling. It was breathtaking. I could not tear my eyes away from the combination of athletic agility and strength. Every movement was both beautiful and purposeful. The show is put on by four dancers, Maria Artim, Katherine Pertonaci, Garrett Olthuis, and Sean Green. Their movements told of a love story and the gravity and bonds felt by those involved. It was a stunning work. The show is 120 minutes and the last show was September 11.

Overall, I had a successful and really fun weekend seeing shows at the Fringe Festival. There are hundreds of shows to see before the festival ends on September 24. Even after the festival is over, FringeArts hosts really interesting shows all year round. Be sure to get out to Philadelphia to see one.