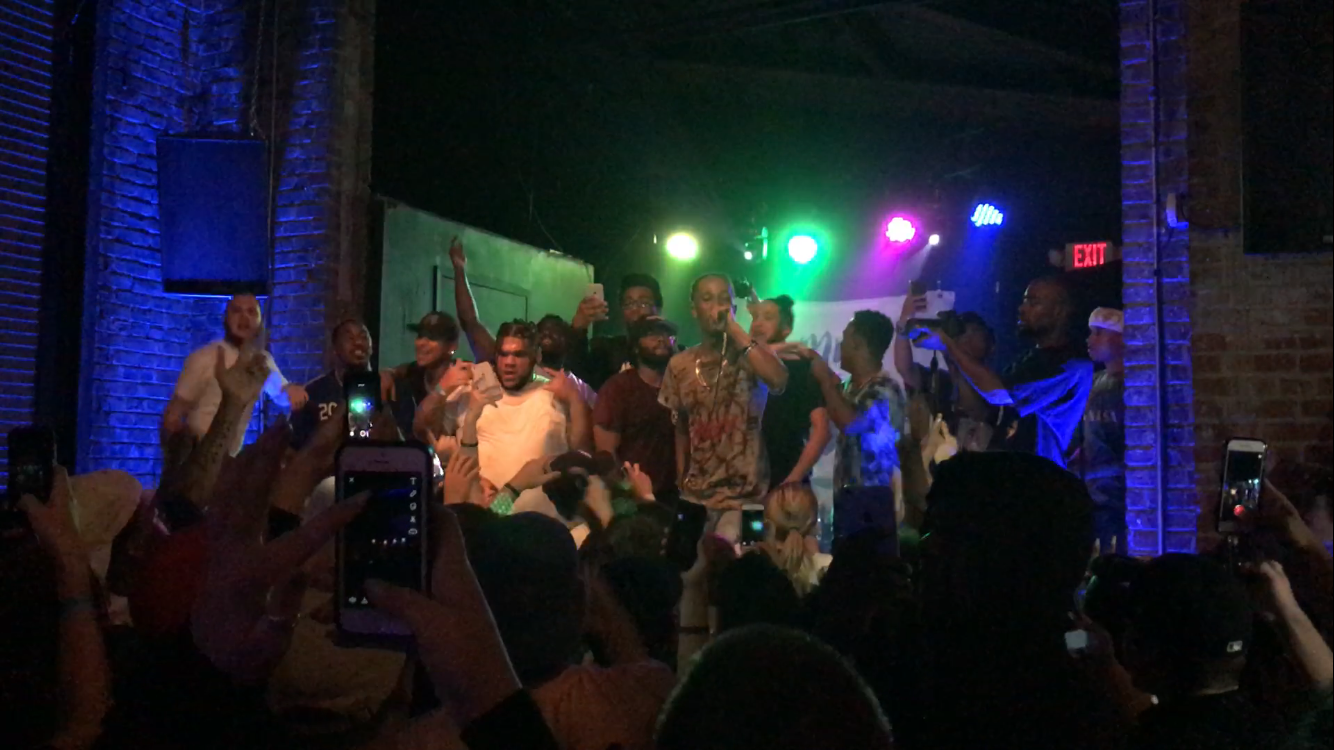 Mir Fontane on stage at his concert in Philadelphia. (Jared Fisch)

Mir Fontane on stage at his concert in Philadelphia.

Rising from the ashes of one of America’s most dangerous cities is rapper, Mir Fontane. On his way up, Fontane dealt with the murder of friends and family. His music tells stories of the crime-ridden, drug-filled streets that he calls “home.”

Jamir Daaliya abbreviated his first name to “Mir” and took Fontane from Johnny Fontane, the godson of Vito Corleone in The Godfather. Daaliya took Fontane because the character “just wanted success” similar to himself.

His first album, Who’s Watching the Kids was released in 2016. The album title is “a statement to [Daaliya’s] city…half of Camden’s population is pretty much under the age of 24 so the youth pretty much runs the city”. With a median age of 28.9, Daaliya is spot on with his statement.

Although his childhood wasn’t easy, Daaliya still reps his city opening the second stanza of his first song on Who’s Watching the Kids with “south, south, south, southside” and later rapping “Jersey born, but I’m Camden made.” Daaliya even started his own movement hyping up South Jersey called “$outh$ide.” Fontane shouts out the $outh$ide in his next song “Damon Wayans” by finishing his first verse with “South Side, double dollar signs.”

2017 has been Daaliya’s biggest year so far. He dropped Camden, went on the “Fresh Out the Jungle Tour” with Tate Kobang and was even noticed by XXL Magazine. Although he was not voted into this year’s XXL Freshman List, he has “one hundred percent feeling” that he will get it next year.

Camden is a true ode to Daaliya’s city. The entire album is filled with scenes and stories witnessed during his childhood in the city. The best two stories on the album are found on the last two songs.

“Down by the River” talks about Daaliya’s cousin who sold cocaine. He raps, “One day he forgot his gun/Couple [expletive] went fast, asked what hood he was from/Stood up, tried to run cause he knew what it was/3 shots in his back left his face in the mud.” The song touches upon the very real life and death of Camden

“$horty $tory” tells an even more dramatic story about a real man with a real story. Daaliya gives him a fictitious name to protect those in the song. The man, named “Shorty” avenges the death of his girl and his unborn baby. While running away from the scene he stops a car at gunpoint. The car speeds off and he shoots. Daaliya talks to the listener at the very end, “Prepare yourself, cause here’s when things get incredibly real/As the Toyota on that hill slowly came to a still/Shorty ran to the drivers side, broke down into chills/He dropped his gun when he saw his Momma slumped on the wheel/Welcome to Camden.”

Daaliya is one of this generation’s best storytellers. Mir Fontane is a very different rapper than those currently running the game. He tells stories rather than using ad-libs to piece together a song with no meaning. Mir Fontane is different, he is genuine and he raps from the heart. Listen to his story…the story of Camden.