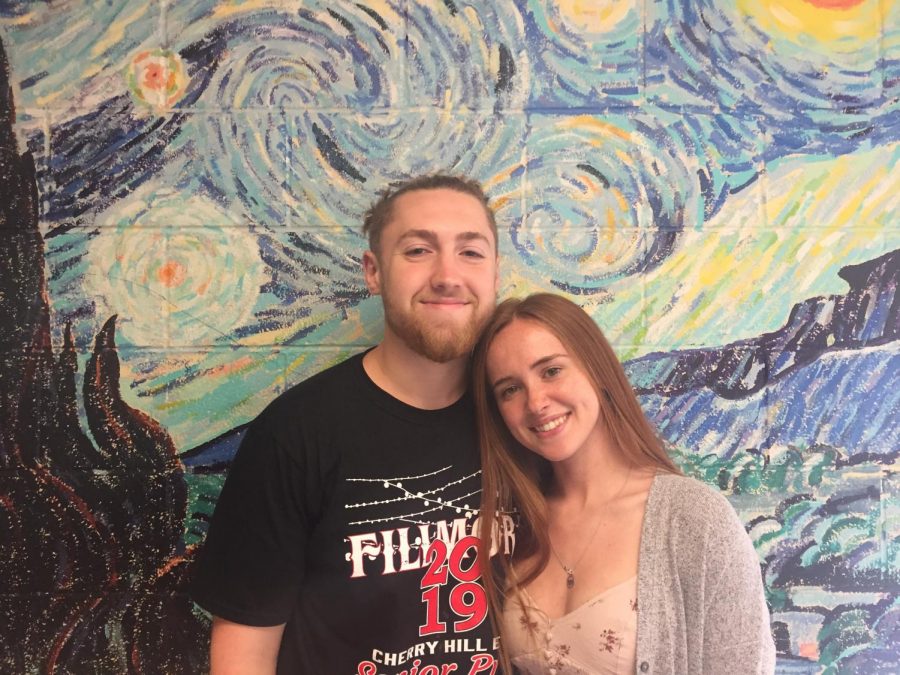 Q: How did you guys meet?

Lily: We had a couple mutual friends and so we kind of learned about each other and became friends. And then we were friends for a couple weeks and then we went on our first date. This was freshman year in January/February.

Q: What were your first impressions of each other?

Mitchell: I always thought she was a really nice girl and kind of quiet, which I was kind of into because I was pretty quiet too.

Lily: Yeah I thought he was super shy and I never thought that he’d approach me because everyone said he was so shy. And it’s true, he is really shy.

Q: What did you do for your first date?

Mitchell:  I think we went to the movies. I actually don’t remember the movie name.

Lily:  Yes, we went to the movies and we shouldn’t have went. We just talked the whole time.

Mitchell: We sat in the back corner.

Mitchell: And it was mostly old people who went to the movie. It probably would have been better to go to a dinner and we could have just talked.

Q: What do you guys do together?

Mitchell: We kind of just hang out on the weekends. We’ll go to Shake Shack a lot.

Lily: We love getting burgers.

Mitchell: Yeah, that’s our favorite place. We go swimming sometimes in my pool. We go to the beach occasionally.

Q:  What are each other’s best and worst traits?

Lily:  I would say [his best traits are that] he’s really driven in whatever he does, for football he left East his junior year just to make sure he had a better position and could play more, so whatever he does he is really focused on, which I think is really admirable. And he’s also just really polite, especially to my family and stuff, it’s a big thing for me. He’s always just so polite to everyone of my friends so I really like that.  [But he] can be really stubborn, like sometimes he sees a certain way and he can’t see another way.

Mitchell: I think her best trait is probably her smarts and her organization. She’s really on top of things  and that goes really well with me cause I’m pretty disorganized. So she’s a nice check in my life. I also like how she’s a rule follower and she’s really sweet. And the traits I don’t like are that she’s oblivious sometimes, like she’s the  brightest person ever, but sometimes she can be a little bit oblivius and not see the answer [that is] right in front of her.

Q:  What’s something embarrassing about each other?

Mitchell:  One time, our freshman year, we went on a bike ride and I accidentally crashed into her and pushed her over and she got a huge scrape on her leg.

Lily: This was one of our first dates.

Mitchell: And [the scar is] still there.  I was so embarrassed. It was a really embarrassing moment for me.

Lily:  Another time, when we first started dating, he invited me over to swim at his pool. I’m in the pool and he’s walking to come in and he just [slips] on the deck.

Lily:  He just fell on his back and it was so funny. He’s so clumsy.

Mitchell: That was also pretty early on in the relationship.

Q:  What does your relationship mean to you?

Lily: I would say [it means] so much just cause we basically grew up together. From freshman year to now, now we drive now we’re both adults, but we met when we were kids so we definitely grew together… which I think is really important. And we’re just best friends, even if we weren’t dating I think we’d be best friends.

Mitchell: It means a lot to me, I think it’s a big part of my life too.  It’s somebody that’s always there, [she’s] always reliable, she’s always going to be there no matter what happens in life, [I’ll] always have someone to go to, even as just best friends.

Q: What do you see in the future of your relationship?