After two days of concerts—Ghost on April 14 in Stroudsburg and Iggy Pop on April 15 in Philly—I was in the music mood. Thankfully, Record Store Day was on April 16 in order to continue my long, music-filled weekend.

On Saturday, I woke up at 8 a.m. in order to make it to Tunes in Marlton by 9 a.m. Even though there is another Tunes located closer in Voorhees, I find that the Marlton location has a better selection of records.

Once I arrived at Tunes, proudly wearing my VIP Ghost shirt from two days earlier, I, along with thirty other people, began perusing the boxes of records laid out along the walls. By the door, dozens of seven-inch records were displayed-most of them Record Store Day exclusive releases. Out of those I picked up a Death Cab for Cutie release with a cover of Guided by Voices’ “Tractor Rape Chain” on side A and Death Cab’s own “Black Sun,” off of its newest record, Kintsugi.

Next to the Death Cab release, I found a Side by Side release of Talking Heads’ 1983 song, “This Must Be the Place (Naïve Melody)” backed with a cover of that same song by Echosmith. The wax for the record is translucent blue/white swirl.

Record Store Day annually releases a mystery title Side by Side release. Although I went into Tunes 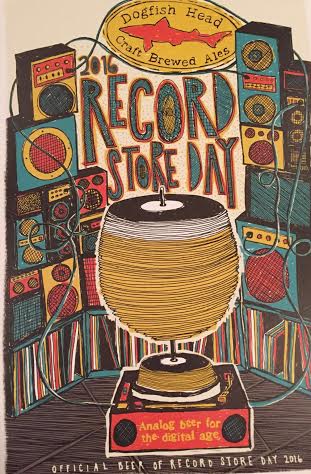 without knowing what the release was (a quick search on social media proved unsuccessful to try to find out the artists featured on the release), I purchased the record anyway. When I got home, I was delighted to find out that the record was MC5’s 1969 song, “Rocket Reducer No. 62 (Rama Lama Fa Fa Fa),” backed with a cover of that song by Melvins on translucent red vinyl.

Upon walking further into the store, I saw Cheap Trick’s Found New Parts, but I decided that I did not need it even though it was only limited to 4000 copies.

Near the Cheap Trick record, I saw a 10 inch picture disc of Star Wars: The Force Awakens “March of the Resistance b/w Rey’s Theme” performed by John Williams. As a huge fan of Star Wars, I saw “The Force Awakens” six times in the four weeks following the movie’s release. This record will have a special place in my collection, even though picture discs tend to emit lower quality sound.

As I made my way towards the back of the store, I saw Xiu Xiu Plays the Music of Twin Peaks by Xiu Xiu. As a lover of all things “Twin Peaks,” I was surprised that Tunes had a large amount of this record, since it was limited to 2000 copies. I have a love for colored vinyl, and many Record Store Day releases come in various color combinations. This record was no exception; it was a 180-gram, red and blue colored record.

As I was nearing the other side of the store, I noticed I Dig Everything: Pye Years 1966 by David Bowie. Since Bowie’s death in early January, I have been trying to compile as many Bowie releases as I can in order to help his legacy live on in my collection. Every year, Bowie releases picture discs, however the picture discs sold out before I could get my hands on them.

I finally reached the checkout line, which moved slowly due to there only being one cashier. However I was not in a rush, and I stood marveling at my records while I waited. After around five minutes, I found myself feeling upset about not picking up the Cheap Trick record, so I had my sister wait in line while I grabbed that release and looked around for any records that I may have missed.

Once I reached the cashier, I received a canvas Record Store Day bag filled with two CDs: a Record

I have gone to my local record stores on Record Store Day since 2013 with Jack White as the Record Store Day ambassador. This year’s ambassador was Metallica, who performed an in-house performance at Rasputin Music in Berkeley, Calif. My fourth Record Store Day was a success, although I will admit that the releases were not as strong as in previous years.