In Alexander Hamilton’s 1800s, a ten dollar bill could buy one the equivalent of $125.00 of purchases in today’s America.  However, the Hamilton bill at the local mall today, could probably only quench one’s 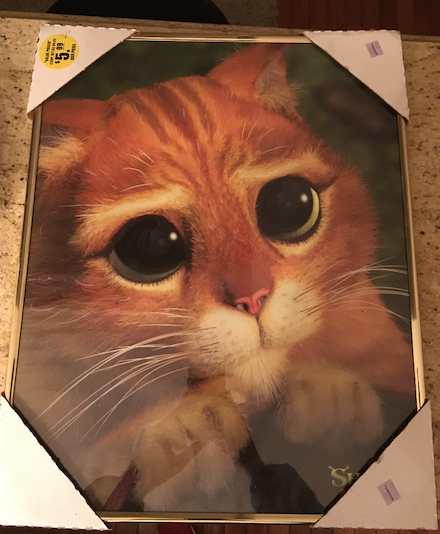 thirst for a Starbucks grande latte with some extra shots of espresso and syrup to their sugary-liking. But for buying merchandise? Good luck! However, if one takes the fork in the road, and says welcome to the local GoodWill thrift shop, they may actually be able to find a deal.

With just a $10 spot in my pocket, I strolled into Goodwill Industries International, Inc. with the challenge of stretching that bill till it snapped. The smell of “Certified Pre-Owned” and gently-worn clothing items (formerly known as, “Used Clothes”) filled my nostrils as I journeyed first down the aisles of color-sorted items, scanning the price tags. I then turned the corner and happened upon Goodwill’s apparent Art area, displaying pictures and paintings. 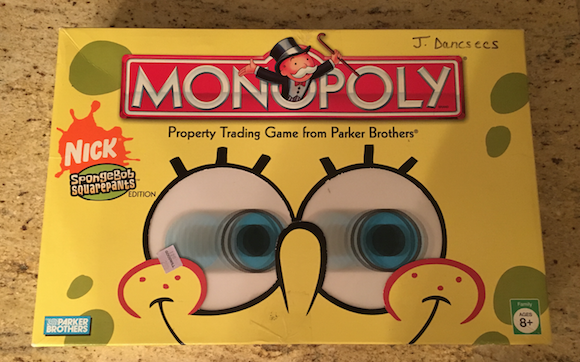 Many of the art pieces were the works of child prodigies, or at least of elementary school kids attempting self portraits. Next, I found an unused (shocking) blown up picture of Puss-in-Boots from Shrek. I couldn’t resist the cuteness that was captured of the characters, so I popped it for $2.99. Continuing onward, I walked to the Entertainment Section, which had crates full of record albums and VCR movies. One movie in particular caught my eye, Disney’s “The Lion King.” I felt  confident that I was getting a deal at $0.25, despite the name “Kevin Morgan” written at the top of the box cover in permanent marker. Thanks for the movie, Kevin! My first two purchases caused my childhood memories to start flowing back to me and I decided to continue with the theme. 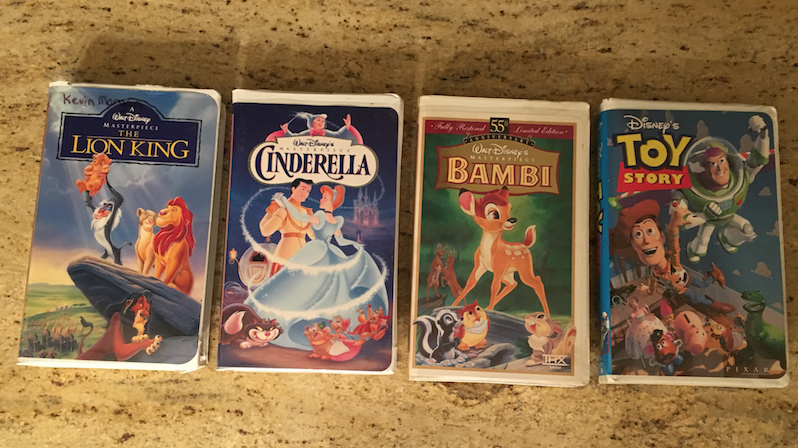 Moving on to the Games section, I was delighted to see a plethora of old Xbox and Gamecube video games. But what truly caught my childhood eye was a Monopoly board game unlike any other I had seen before — A very Limited Edition Spongebob Squarepants set for sale at the very limited price of $1.99. Having spent enough time at the thrift shop, and feeling satisfied with my purchases, it was time for me to check out.

Just as my Lion King movie was being scanned, the cashier informed me that I could get a total of four movies for just a dollar. What a bargain, and just 302 days before Black Friday! So, I returned to the entertainment aisle and picked up three more Disney classics to round out my collection: “Toy Story”, Cinderella”, and “Bambi”. My total expenditures for the day was $6.40 including tax. This left me with $3.60, just enough money to buy a tall featured coffee at Starbucks. Alexander Hamilton would roll in his grave if knew how much coffee costs today, as opposed to $0.35/lbs. in his day. But, nonetheless, he would still be proud at how I stretched his bill.

As I first stepped into my local Goodwill store, I felt like I had ventured down into the depths of my grandmother’s basement where a variety of accumulated items from past years and distant places had gathered. Worn out sweatshirts, suits, and sneakers were lined up and down the immensely filled aisles. Countless dusty records, VHS tapes of dated Disney movies, and CD’s ranging from the 1950’s all the way up to the Jessica Simpson era piled up on the deteriorating wooden shelves. Aging portraits of flowers and half cracked picture frames were found near the miscellaneous household accessories and headless lamps. 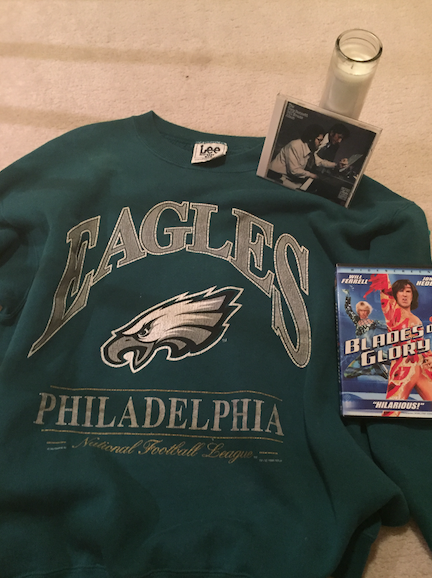 I strolled up and down the aisles, circled around the miscellaneous household items once, twice…maybe five times, and rummaged through the CD’s for over ten minutes, until I had detailed knowledge of almost every item found inside of Goodwill.

After my fourth or fifth circle around the store, I decided it was just about time to select some of the favorable items that I had come across and ultimately make a purchase. On my way back over to the CD shelf where I desired to make a purchase the most, I passed by a slender off-white candle. It was simple and clean and it looked out of place among the colorful clutter that made a home next to it. I picked it up.

The CD shelf required an immense amount of patience until I finally found a dusty Tony Bennett CD. As soon as I held the CD, I was succumbed to nostalgic memories of my childhood. I thought about all of the family parties and Sunday dinners down the shore that were filled with sounds of Frank Sinatra, Dean Martin, and Tony Bennett, and how my grandfather would serenade all of the kids knowing every word to every song.

I took another aimless stroll through the aisles.

Moving along against the congested rows of various fabrics, my childhood memories were once again triggered by an oversized vintage Eagles crewneck. The deep green stuffed in between the browns, grays, and blacks of all of the other sweatshirts was difficult to ignore. I noticed a faint yellow stain on the top right shoulder of the crewneck. That’s what I liked most about it.

Last minute, I acquired a couple other little additions in order to spice up my collection, such as a Blades of Glory DVD (which obviously deemed worthy enough of purchase).

As I stepped out of the store clutching my $6.38 purchase, a strange feeling washed over me. Yes, I was laughing at the seemingly odd purchases my other friends and I had made. And yes, at some points during my time there I found certain items and people comical, but I also felt deeply disturbed. I felt as if I was stepping out of a dreary reality that I had never experienced before. I soon felt guilty and ignorant. I felt guilty and ignorant at the fact that this trip would just be one of my insignificant high school experiences, whereas for some people these trips to Goodwill and stores similar were not a joke or a one-time experience, but it was their livelihood.