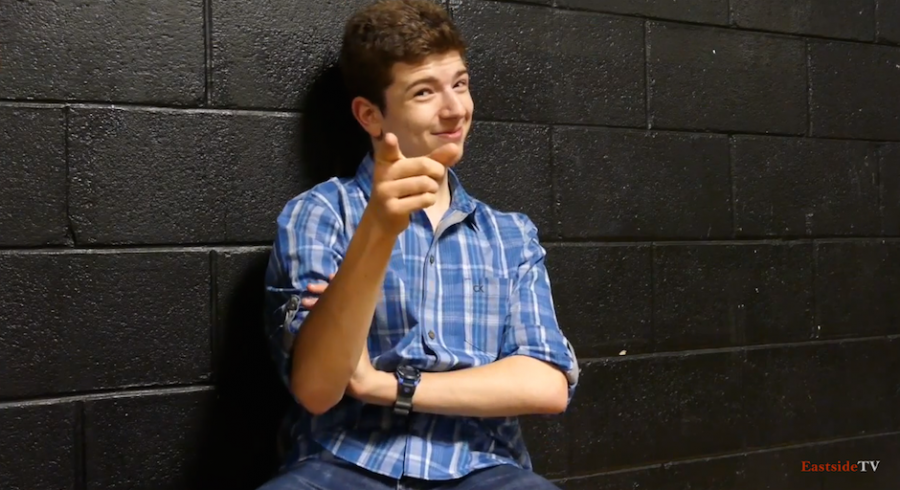 Whether one finds him eating mushroom pizza (his favorite type), exploring a National Park with his family, or tap dancing away in the East auditorium, Richard Kirby (‘15), also known as Mr. Happy Taps, will always have a smile on his face.

“I’m super happy all the time so you’ll never see me with a frown on my face or even a serious look, it’s like the happiness will make you sick,” said Kirby enthusiastically.

Known to many as just ‘Kirby,’ Mr. Happy Taps will tap dance his way into the spotlight at Mr. East on Friday, March 27. While he did not reveal exactly what his talent portion will be, Kirby did reveal that it would involve tap dancing with an “extra special something.”

Kirby said, “In the past years, no one has done tap dancing for their talent at Mr. East, so I’m trying to pave a new avenue in a way of the Mr. East world.”

While Kirby has experience in other forms of dance, such as ballet, Kirby described tap dancing as his true passion.

“[Tap dancing is] very rhythmic, it’s different from other forms of dance where it’s all about being upright and holding your core strong and keeping your arms sturdy,” Kirby explained. “It’s more about what you make with your feet.”

Mr. East may be the second time that the East community has the fortune to see Kirby showcase his 13 years of tap dancing experience on the East stage, as he recently performed as Moonface Martin in the White Cast of “Anything Goes.” Kirby described this role and his role as the Mad Hatter in the Walnut Steet Theater’s children production of “Alice in Wonderland” as his two biggest high school accomplishments.

Kirby actively participates in the East’s theater and vocal departments as a performer in many shows and as a member of Voce. Triple threat Kirby has realized that his dancing experience has helped him in his theater endeavors.

“Once I started to realize that dance is a big part of musical theater, I saw the benefits of it and in some ways it gave me new appreciation for how great tap dancing is,” said Kirby.

However, Kirby has not always exhibited pride for his dancing abilities.

“I kept it a secret that I danced for years. I was ashamed of dancing for a while, probably from fourth grade to seventh grade…then at my Bar Mitzvah, that was the first time I ever showed anybody that I actually danced,” admitted Kirby. “I think I just had to say ‘this is who I am.’ ”

I’m super happy all the time so you’ll never see me with a frown on my face or even a serious look, it’s like the happiness will make you sick”

Kirby does not limit his interests solely to dancing, singing and acting. For almost every summer of his life, Kirby and his family have traveled to and explored the National Parks. Kirby has seen many amazing sights and most recently traveled to Utah’s Grand Staircase Escalante National Monument where he went slot canyoneering.

“Slot canyons are made by erosion, so the canyons are probably about six inches wide so you sort of go through sideways, and it’s just something that’s so neat and different and that’s what I love about nature and the power of it,” said Kirby.

In the future, when he is not exploring nature or performing his heart out, Kirby hopes to double major in theater and biology or business and move on to possibly starting up his own theatre company or becoming a teacher and then a drama department director. For now, catch him dancing away at Mr. East on Friday, March 27.