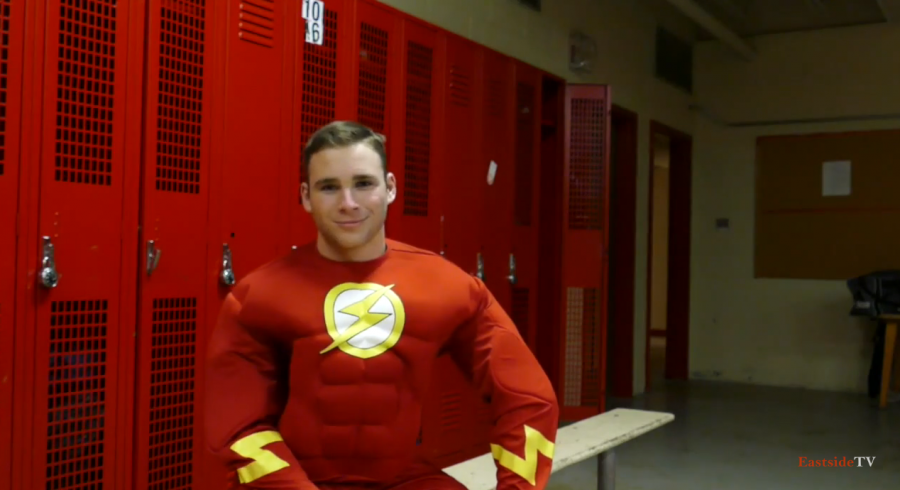 Ready to present a “flashy” act at this year’s Mr. East competition is Sam Amon (’15), better known as Mr. Samazing.

“I’ve been to the past three [Mr. East competitions] and I’ve just really enjoyed most of the performances,” said Amon.

I just want to entertain them and make it memorable-not even necessarily win-but just to make it funny and show off my talents, I guess you can say.”

“I’m pretty much recreating history [in my act]…changing it within spirit week, especially the dance competition part of it,” Amon said. “After some heated debates and overthrowing of current dance teachers, I will be brought in to ‘teach’ a dance.”

As this year’s Mr. East theme is superheroes, Amon has adopted the role of Flash, the superhero with super speed. With his fast-paced and busy schedule of constantly saving the day and helping people of the East community, Amon hardly has any downtime to himself. When he does have a bit of free time, however, he likes to “slow it down and relax, [sipping] a nice cold beverage in [his] lawn chair.”

Overall, Amon looks forward to putting on a great show for his classmates by “flashing his talents.”

“I just want to give my peers a good performance,” he said. “I just want to entertain them and make it memorable-not even necessarily win-but just to make it funny and show off my talents, I guess you can say.”